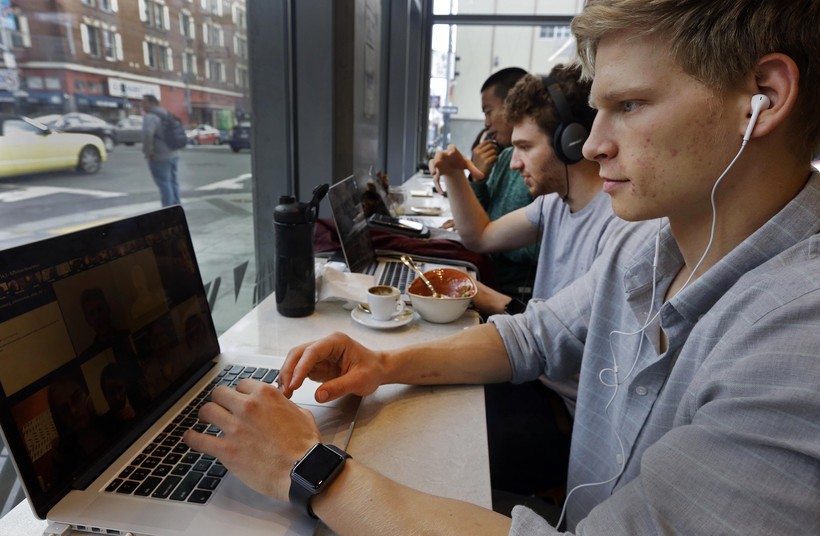 State Universities Look To Outside Vendors To Grow Online Programs

Middle school teacher Daisy Linville wouldn't have gone back to school to get a master's degree in educational administration at the University of Wisconsin–Superior if the courses hadn't been available online.

"I’m a single mom with two boys, and I’m a full-time teacher in central Wisconsin," said Linville. "Driving to a university was not in the cards for me."

Linville who works at Spencer Public Schools is among a growing number of non-traditional students nationwide who are looking to expand their education online. More than a quarter of graduate students across the country are pursuing a degree online, according to a 2018 report on online education. Those graduate students are often working adults with families who prefer the convenience of online programs over traveling to a physical campus, according to Terri Kronzer, professor of educational administration at UW-Superior.

"The students themselves are choosing what best fits their needs," she said.

Universities like UW-Superior are trying to grow their online programs to provide access to a range of students. At the same time, the university has seen declining enrollment on campus from the populations they serve in northern Wisconsin and Minnesota. Those two issues were key factors in the university’s recent decision to contract with outside company Academic Partnerships to recruit students for online graduate education programs, according to Brenda Harms, interim vice chancellor of enrollment management at UW-Superior.

"The population base is really shrinking and so (we're) really needing to say how can we get creative in helping to extend our reach more into southern Wisconsin, southern Minnesota and beyond if needed," said Harms.

Academic Partnerships has brought in roughly $900,000 in tuition revenues to UW-Superior since March 2017, half of which has gone back to the company for recruiting students. It’s a common model among online program managers, or OPMs — they provide an upfront investment in exchange for a percentage of the tuition revenue.

Kronzer said it's well worth the results.

There were 154 students enrolled in online graduate degrees at UW-Superior as of last fall, which was more than three times the number enrolled in fall of 2016. Most of the growth came from the four graduate online education programs utilizing Academic Partnerships.

UW-Superior is not the only campus in the UW System contracting with outside companies to boost online numbers. UW-Parkside has also contracted with Academic Partnerships. And the vendor All Campus is providing recruitment services to UW-Platteville for its online criminal justice master’s degree program, according to Paul Erickson, the university’s public information officer. The university is in the fifth year of five-year contract.

"UW-Platteville pays no upfront money to this. This is based on tuition-sharing so it behooves the company — the more students the company brings in, the more they’re going to make," he said. "This way we have no obligation. If nothing works, we are not out any money for this."

However, critics of online program managers like Academic Partnerships and All Campus are leery of non-profit institutions contracting with private companies. They fear pressures to grow profits and enrollment may take away from academic quality or traditional programs on-campus.

"Programs that might serve a very important community and regional need may be sacrificed to the desires of a company to grow enrollment," Sipress told the Tribune.

Companies argue they’re serving a need and recruiting new students who wouldn't otherwise enroll on-campus. The new student base generates revenue that supplements university funds for all campus programs, according to Joe Diamond, chief executive officer for All Campus.

"In most cases, schools are struggling to find additional sources of revenue so they don’t have money just sitting around to make that significant marketing risk in recruiting those students so that’s the reason they decide to do this," said Diamond. "We offer the opportunity for a school to say pay us upfront, but almost invariably a school decides 'I’d much rather someone come in as a financial partner and take this risk off of our plate and shift it to them.'"

Yet, some educators fear the unwritten consequences of contracting with online program managers, including Lynn Pasquerella, president of the Association of American Colleges & Universities.

"That tuition-carrying model has at times students paying up to 80 percent of their tuition to cover the cost of the OPMs, and they’re taking out loans to do this to pay their tuition. Because they’re online courses, there's a much lower percentage of graduation," she said. "So it continues to thwart our desire to provide access to excellence, retention and completion for those who are underserved."

Diamond said All Campus receives less than the average 50 percent companies receive through the revenue-sharing model and encourages institutions to keep costs down.

The majority of colleges and universities are not utilizing or have no plans to use online program managers, according to the 2018 report on the changing landscape of online education. Ron Legon is co-author of the report and executive director emeritus with Quality Matters, a nonprofit organization overseeing the academic quality of online programs. Legon said institutions they surveyed are skeptical of upfront or long-term costs associated with online program managers, as well as their ability to meet enrollment targets.

Some institutions have terminated contracts with companies, including the University of Florida. Despite skepticism among institutions, the market for online program managers is growing with revenues approaching $2 billion and slated to grow another 10 percent in the next couple years, according to principal analyst Howard Lurie with the higher education research firm Eduventures. Lurie said the desire for campuses to recruit more students is driving their growth.

"On public campuses where funding might be endangered for certain programs, it can sometimes be a challenge for faculty to say 'why are we losing revenue to an outside company,'" said Lurie. "I think that becomes a little grain of the sand in the shoe for some faculty about what’s happening here."

He said contracting with OPMs can be a contentious issue for faculty. But, Lurie said they can also work together to serve the institution as a whole. Kronzer, the UW-Superior ed administration professor, noted the school isn’t using internal resources to promote their online graduate education program.

UW-Superior's Harms added that investment online doesn't seek to take away from on-campus programs and instead seeks to provide another avenue for the university to realize its mission to provide access to students.

"I believe there will always be that mix ... of traditional undergraduate residential programs — no intent to make a change there — but to add to that and expand our reach by offering things online," said Harms.