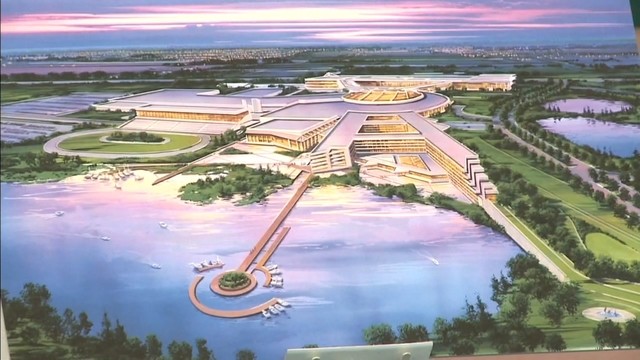 Above, an artist's rendering of the proposed casino project. Courtesy of the Menominee Tribe.

Menominee Tribe Chair Plans To Make Case For Project In His Address
By Shawn Johnson
Share:

The Menominee Tribe will deliver this year's State of the Tribes address to the Wisconsin Legislature at a time when Menominee leaders are seeking the government's approval of a Kenosha casino.

Menominee Chair Craig Corn said he expects whoever speaks for his tribe will talk about several issues that unite Wisconsin's Native Americans. But, when it comes to the Kenosha casino, there's a strong divide between two of the tribes. The Forest County Potawatomi, who already run a major casino in Milwaukee, have vigorously fought the plan. The Menominee want it badly, and Corn said they plan to talk about it.

“We want to have a little bit of our story and we want to let them know what this means to our people,” said Corn. “That message is still strong with Menominee, you know. If we don't get this, we don't know what we're going to do.”

Corn said as the Menominee work on their speech, they'll send it out for suggestions from Wisconsin's other tribes, including the Potawatomi. But Corn said they won't shy away from talking about the casino in their speech.

“You know, at the end of the day, it's still Menominee's turn and we still have the opportunity to give our message,” said Corn. “And we're going to do our best to give it loud and clear.”

The Great Lakes Intertribal Council picked the Menominee for this year's State of the Tribes address. Executive Director Michael Allen Sr. said they were one of just three tribes that had yet to deliver the address since the legislature started hosting it it in 2005. This year's speech is scheduled for Feb. 13.

While the Menominee will be speaking to the Legislature, it's Walker who has the final say on the Kenosha casino. Walker hasn't set a timeline on when he might make a decision on the project.