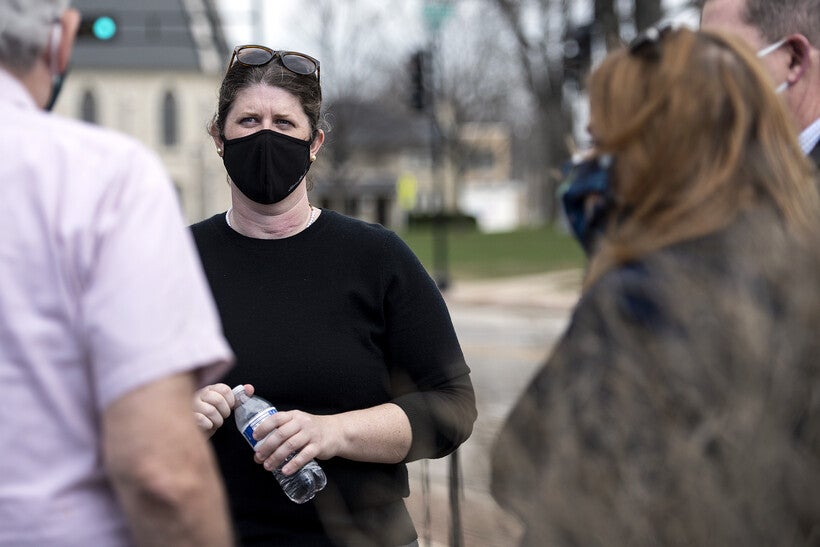 Jill Underly speaks to people during her candidacy for state superintendent at a campaign event Tuesday, March 30, 2021, in Waukesha, Wis. Angela Major/WPR

The race to lead Wisconsin’s state education agency — like so many education battles over the past year — has centered on the COVID-19 pandemic and the ways it has widened existing inequalities.

Across the state, districts have approached pandemic learning in a multitude of ways. And as superintendent of the Pecatonica Area School District, Jill Underly, has praised that flexibility.

While campaigning for the state's top schools position, Underly has said reopening schools should be done with an eye toward each district's concerns. But she's also noted that things are likely to change between now when she would take office, if elected.

"It might be a moot point, honestly, because teachers are getting vaccinated, and by the time I take office in July, I think the buildings are going to be open," she said.

Underly will face Deborah Kerr, former superintendent of the Brown Deer School District — who has made reopening schools to in-person instruction a cornerstone of her campaign — in the April 6 election.

A Rare Shot At The State Superintendent Job

This is the first time in over a decade that there’s been an open race to fill Wisconsin’s top education position. Gov. Tony Evers was the state superintendent from 2009 to 2019, when he became governor. His appointed replacement, current superintendent Carolyn Stanford Taylor, announced in January 2020 that she did not intend to run for the seat.

The open position attracted a large field of candidates — seven ran in the primary — that was whittled down to two, Underly and Kerr.

It’s also led to an impressive amount of political spending. According to the nonpartisan government watchdog group the Wisconsin Democracy Campaign, liberal advocacy group A Better Wisconsin Together has spent $675,000 campaigning against Kerr, while the typically conservative-backing, pro-school voucher group the American Federation for Children has spent $56,500 opposing Underly — a ratio of 12 to 1. A Better Wisconsin Together, along with the Wisconsin Education Association Council and Planned Parenthood Advocates of Wisconsin, have also spent about $90,000 in support of Underly.

Underly has been critical of Wisconsin’s voucher program, which allows eligible families to use state dollars to pay for private schools. She said she wants to see the program phased out, though she stresses she wouldn’t take vouchers away from students who already have them.

Underly’s opposition to, and Kerr’s support for, the voucher program has, in part, driven the division of the race around typical partisan lines, though the position itself is nonpartisan. Both candidates have lamented the race’s politicization, but experts say it's fairly common, even in nonpartisan races, because while the position itself isn't party affiliated, Wisconsin's parties can — and do — weigh in.

Underly has been endorsed by the state's largest teachers’ union, the Wisconsin Education Association Council, as well as every Democratic member of Wisconsin’s congressional delegation and a number of Democratic state lawmakers. 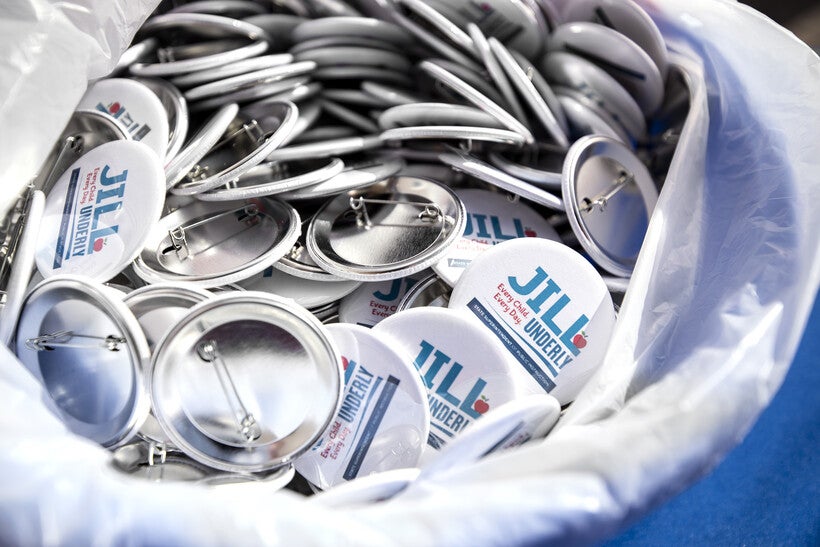 Underly has been criticized for her opposition to vouchers in light of her own decision in 2013 to send her children to the private St. James Catholic School for pre-kindergarten — though she did not use the voucher program to pay for her children's enrollment.

"I had to laugh a little bit about that (surfacing)," she said. "We were members of the parish, and certainly there was a child care aspect to it — I wanted our kids in full-day 4K and 5K when I was a working mom, and my husband works, also, and we needed the after-school care piece."

During the time her kids were in preschool, Underly worked as an assistant director of teacher education at the Department of Public Instruction. In 2015, she took a job as Pecatonica's superintendent. There, her own experience drove her to expand the district's pre-K programs to offer parents an all-day option — something she said she’s pushed for across the state, and would continue to advocate for as state superintendent.

Jill Gaskell, a member of the Pecatonica school board who’s worked with Underly for seven years, said expanding 4K and before-and after-school care was a game-changer for the district.

"A lot of people commute to Madison for their jobs, and along the way they’d take their kids to daycare in Mount Horeb or Verona, and then would end up enrolling in those schools through open enrollment," she said. "(Expanded pre-K) really cut down the number of people that we had open enrolling out of our district."

A Focus On Equity

Underly’s focus coming out of the COVID-19 pandemic is on equity. While equity was the cornerstone of her platform before COVID-19, she said it has become even more salient as the disruptions of the last year have widened existing gaps.

"Our public education system is just not equitable anymore," Underly said. "We know that investing in kids on the front end sets them up for a lifetime of success, and then you don’t have to invest in them later on in life for things like disciplinary problems, the school-to-prison pipeline, remediation or health issues — it’s not just better for our kids, it’s better for our parents, it’s better for our economy."

In particular, she said she’d look at access to affordable, high-speed internet, which has been a particular focus of DPI over the past year.

"There’s plenty of places in Wisconsin it’s accessible, but people can’t afford it," she said. "Rural internet and affordable internet is critical."

As students across the state return to classrooms, Underly hopes to take the lessons of the last year and put them to good use in the future.

"What can we learn from virtual education — how can we use that, moving forward, to serve all kids?" she said.

One thing she said the state will certainly need to focus on is social-emotional health in schools after the pandemic. The country as a whole has seen rising need for mental health services over the past decade, and increasing rates of anxiety and depression — and early data shows that’s been exacerbated by the pandemic.

"There’s been a lot of loss, and I think we need to acknowledge that people have lost jobs, maybe they lost their home or their farm, or maybe, worse, someone they know, to COVID," she said. "Our kids have survived a pandemic, and this is perhaps the most challenging year of our lives, and so how can we support them?"

Underly said that mental health focus has to extend not only to kids, but to teachers and families as well. 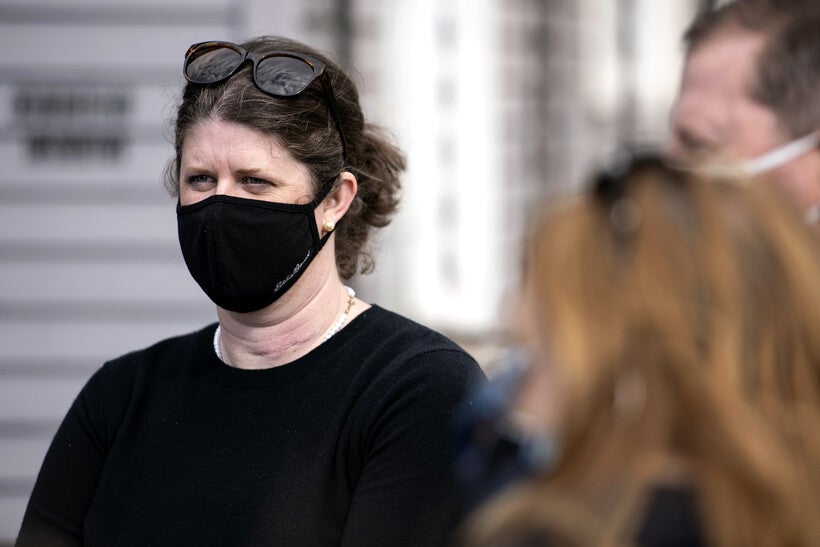 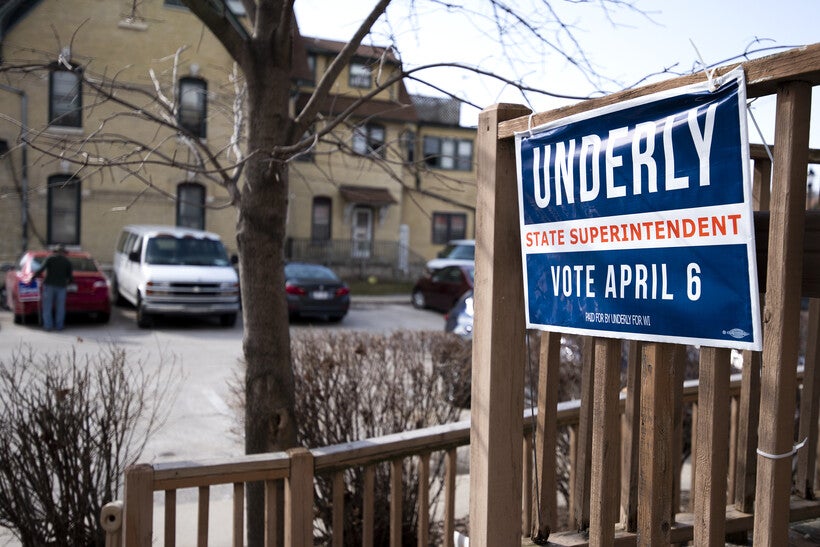 A Job With Limits

Although both candidates have laid out sweeping visions for how to reshape Wisconsin’s state education agency, the power of the state superintendent is hemmed in by strong local control of school districts, and by policies made at the state and federal level.

"They work within the government of the state of Wisconsin — the governor has particular issues that he wants to pursue in public instruction, so do members of the opposite party in the Legislature, and all of those come to constrain and impact the capacity of the person who gets elected to that office," said Lilly Goren, political science professor at Carroll University.

The position's power lies in setting a tone, forming coalitions to push for policy changes — and particularly for state budget allocations — and in interpreting and enforcing state and federal policy, University of Wisconsin-Madison Professor Erica Turner told WPR in February.

"At the end of the day, DPI’s job is pretty limited — it’s policy, it’s licensing its educators, it's working with different coalitions to advance policy, and it’s accountability for funding," she said.

She highlighted her experience testifying before the Legislature while at DPI and working with the Pecatonica school board as the district’s superintendent as qualifications for the coalition-building and advocacy essential to running the state agency.

Gaskell, the Pecatonica board member, said when she phone-banks for Underly’s campaign, she emphasizes how creative and innovative Underly is in working with others to improve education — citing examples like expanding full day 4K, creating Camp Pecatonica and organizing a trip to Italy for students.

Gaskell recalled during one Italy trip, which Underly chaperoned, Pecatonica had a torrential rainstorm that flooded the former church basement the district was using for Camp Pecatonica, destroying the toys and carpeting. She said Underly managed the whole crisis by phone from another time zone, finding a new location for the camp during the cleanup and directing people as they salvaged what they could from the flood.

"She’s just really good that way," said Gaskell. "I hate like hell that I’m gonna lose her (as Pecatonica superintendent), but I have seen the passion that she works with, and her abilities, and I have no doubt that she’s just going to shine as the state superintendent."

Underly said she’s excited about the bureaucratic side of the job, and loves to get "in the weeds" on policy.

"I like government — I know that sounds so Leslie Knope from 'Parks and Rec,' but I just love how, when it works, and it works well, the positive impact it has on people’s lives," she said. 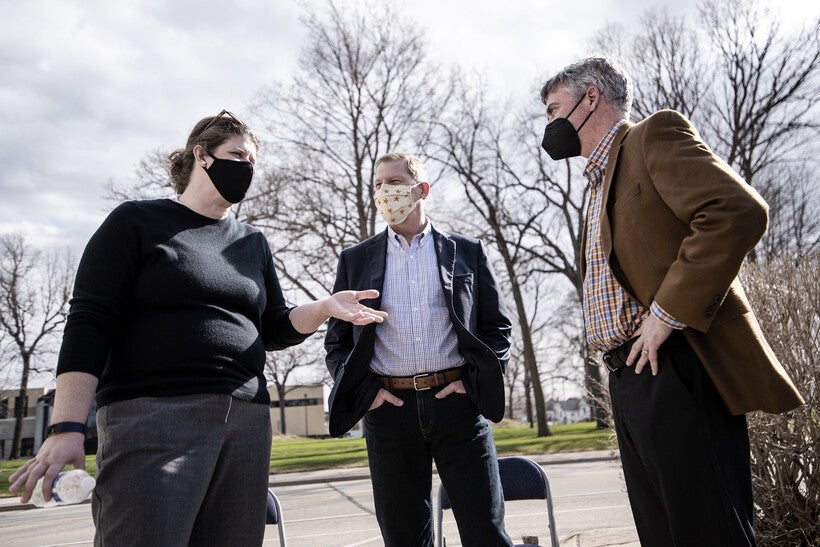