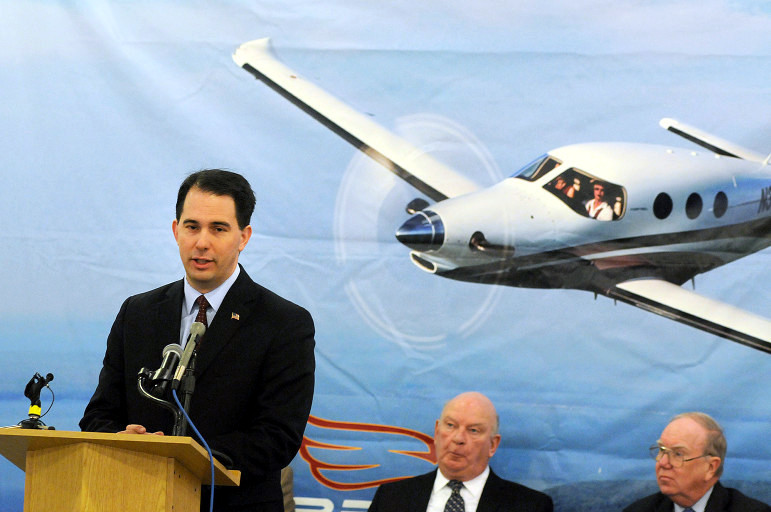 State Signed Off On Airplane Manufacturing Deal Without Proper Review

A top official for one of the state's economic development agencies called a project to build a plane manufacturing facility in Superior the most risky investment the organization had ever funded through the federal New Markets Tax Credit program.

Still, state officials gave taxpayer money and incentives to the aircraft company responsible for the project, despite the risk and without proper review, in an effort to create jobs that have yet to be realized.

In January 2012, Gov. Scott Walker visited Superior to announce the project, which was billed as the city’s largest job creation effort by a manufacturer since World War II. The plan was for Kestrel Aircraft Company to receive $4 million in state and federal loans, as well as $18 million in tax credits through the Wisconsin Economic Development Corp. The Wisconsin Housing and Economic Development Authority would also help Kestrel get up to $90 million in three rounds of tax credits.

During the visit, Walker said none of the loans or tax credits would come unless the company created 600 jobs.

"We’ve put incentives, whether it’s tax credits or other incentives, on the line. But they’re all tied specifically into the number of jobs that are created," Walker said.

Two days later, WEDC — an agency Walker helped establish during his first days in office — signed off on tax credits and a loan for the company without formal staff reviews.

In the months that followed, Kestrel CEO Alan Klapmeier said the state didn’t follow through on its word to provide more loans and incentives as they had agreed. Klapmeier, who is a co-founder of the airplane manufacturer Cirrus, said paperwork set the project back and that the delay caused a domino effect.

"When those pieces of the financing didn't happen on time, it’s disconcerting to the other financial people and they delay theirs as well," Klapmeier said.

Jim Caeser, a consultant for the city of Superior on the project, said the state was at least dishonest and at worst, incompetent.

"Knowing what their process is and the time that it takes to do that due diligence and all those things, then if it was going to take longer than that, they should've indicated so," Caeser said.

Understanding The State's View On The Deal

Spokesmen for WEDC and WHEDA said Kestrel has faced challenges raising money and meeting requirements to receive financing under federal programs like the State Small Business Credit Initiative, which provides support to small businesses and manufacturers.

WHEDA spokesman Kevin Fischer explained that delays in financing occurred because the company offered collateral for the $30 million tax credit award that had already been offered to receive tax credits for another project in Maine.

"The sharing of this collateral needed to be negotiated with the other allocate — Coastal Enterprises Incorporated," said Fischer in an email. "There also was a need to get a special appraisal for the valuation of the intellectual property being offered as collateral."

In documents obtained by Wisconsin Public Radio, WHEDA outlined several risks with the project as they worked for months to award Kestrel with $30 million in federal tax credits.

For one, the agency was concerned that the newly formed company lacked audited financial statements.

"WHEDA/WCDLF (Wisconsin Community Development Legacy Fund) is only requiring proof of engagement of an auditor since the audit could take 60-120 days to complete," wrote WHEDA Economic Development Director Farshad Maltes in a May 2012 memo to WHEDA Executive Director Wyman Winston. "WHEDA/WCDLF is concerned that the audit may have a going concern qualification and also that it may find Kestrel’s internal accounting controls inadequate."

Questions were also raised over Kestrel's dependence on additional rounds of tax credits because the future of the New Markets Tax Credit program was uncertain.

Moreover, WHEDA had doubts Kestrel could build the plane, since doing so hinged on Federal Aviation Administration approval. The agency noted the company had already tried twice to certify the plane in Europe and Maine. Klapmeier has said that Europe’s certification process is much more stringent than the U.S. and that issues with "fine print" on the Maine tax credit deal proved to be a barrier.

The Kestrel CEO maintains that raising enough capital is the one and only obstacle to certification.

In a June 5, 2012 committee meeting, WHEDA Chairman Lee Swanson noted the project was "very risky" and "more akin to venture capital," according to meeting minutes.

Despite these concerns, WHEDA Marketing and Communications Director Brenda Marquardt said Kestrel has met all requirements of receiving tax credits through the federal program. She said outside reviews confirmed the project had a reasonable chance of success.

"Ohio National, an insurance company with an (Standard & Poor's) AA- rating, fully vetted the deal and agreed to be both the lender and tax credit purchaser in this transaction," wrote Marquardt in an email. "They are the entity assuming the financial risk in the project and determined the borrower covenants needed to finance the deal. WHEDA did not use any state funds in financing this transaction."

Marquardt said a WHEDA committee weighed the risks against Klapmeier’s successful history with Cirrus, local support for the project and the potential creation of hundreds of jobs.

After three years, there’s still no plane and no manufacturing facility.

Klapmeier said the company’s success in building the Kestrel-350 single-engine turboprop hinged on the state’s word.

"We’re considering a number of other locations besides Superior," he said. "From our point of view, the economic development project as originally envisioned didn’t happen."

Kestrel’s CEO claims WHEDA didn't follow through with help to secure two more rounds of tax credits for the project.

"The challenges we had were getting other allocations for the project because the project was in default both with Coastal Enterprises Incorporated and the Wisconsin Community Development Legacy Fund (WCDLF) for extended periods of time,” wrote WHEDA spokesman Kevin Fischer in an email. "The project was in financial default and reporting noncompliance."

Klapmeier said that would have never happened if the state had come through with the financing on time.

WEDC said the company has created 24 jobs and Klapmeier has said Kestrel has about 35 employees, according to the Wisconsin Center for Investigative Journalism.

Since then, WEDC has modified its loan agreements with the company to provide interest-only payments until October of this year.

"WEDC has supported and will continue to support Kestrel’s efforts to grow in Wisconsin," said then-WEDC spokesman Mark Maley. "However, Kestrel — like all companies receiving awards from WEDC — must comply with the terms of its contracts.”

"I think there were three or four owners over Cirrus over a period of time and three or four investors that kept investing in them to get that aircraft certified," he said. "I think the same thing is going to happen here. First thing is they got to get it certified and then they got to get a production facility and get it into production. It takes a lot of capital to do that."

City, county and state officials have said Kestrel is current on all loan payments.

The city of Superior offered Kestrel two parcels of land and $1.125 million in tax incremental financing, as well as a $2.4 million loan. Kestrel has paid back roughly $369,000 so far, with another payment coming due next month.

Superior Mayor Bruce Hagen said he had, and still has, high hopes for the project.

"Show me another place where there are 600 jobs that are potentially available with great growth opportunities similar to what Cirrus is in Duluth," said Hagen.

Hagen said he’s interested in offering incentives or whatever they can to keep Kestrel’s plans for a manufacturing facility in the city.

"If the state is not going to further any opportunity for Kestrel, then as I’ve told Alan, let’s get it done right here by ourselves," he said.

After forming a new company with a New Mexico-based outfit this spring, Klapmeier said they’re in a stronger position to certify and build the plane than ever been before.