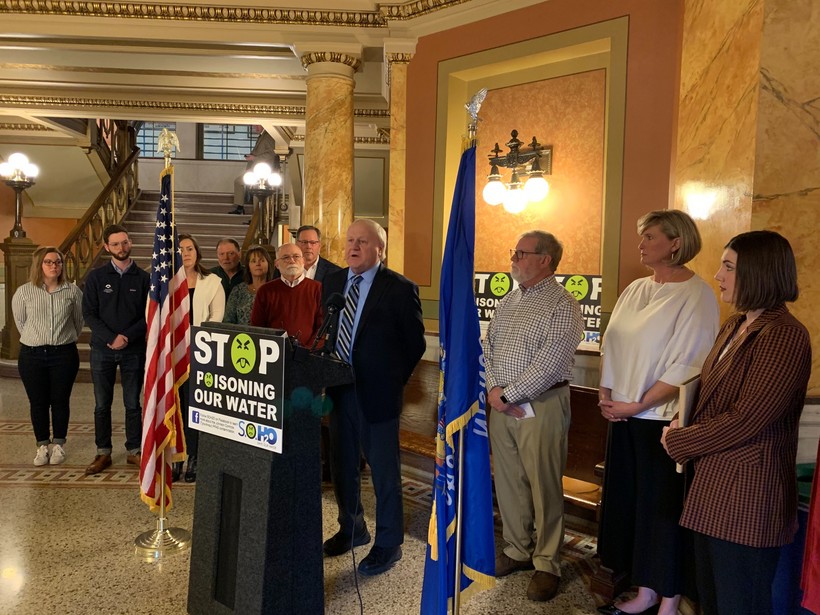 State Sen. Dave Hansen, D-Green Bay, and members of the citizen's group S.O.H20 voiced their opposition Tuesday, March 3, 2020, to an amendment regarding PFAS regulation that was passed by the Assembly in February. S.O.H20 is made up of residents of Marinette and Peshtigo, where high levels of PFAS contamination have been found. Megan Hart/WPR

State Sen. Dave Hansen of Green Bay and a group of Marinette County residents spoke out Tuesday to denounce a last-minute amendment on PFAS regulation that passed the Assembly in February.

The amendment, which was passed just before the Assembly adjourned for the year, calls for additional research on PFAS contamination in Wisconsin.

At a press conference at the Brown County Courthouse, Hansen said the measure doesn't hold the companies that contributed to the contamination accountable. He called for senators to vote it down. Hansen, along with members of the community group S.O.H20, said they would urge Gov. Tony Evers to veto the amendment if it passes the Senate.

"Unfortunately, if the amendment were to become law, it would not be a step forward but more than a few steps back in an effort to protect our children around the state from drinking water poisoned by PFAS," Hansen, a Democrat, said.

PFAS, or per-and polyfluorinated substances, are a type of chemical believed to be hazardous to human health. They're known as "forever chemicals" because they don't break down in nature. High levels of PFAS contamination have been found in Marinette and Peshtigo. They've been attributed to the firefighting foam used at Tyco's fire training facility in Marinette.

Hansen and state Rep. John Nygren, R-Marinette, worked with residents of the affected area to draft more comprehensive legislation on regulating PFAS. It stalled in the Assembly before Nygren proposed the amendment that was ultimately passed. Nygren opposed an earlier bill called the CLEAR Act, which would have made Wisconsin a national leader in PFAS regulation.

"While what the Assembly passed is not the complete package of legislation that I hoped we would pass, it is something that I believe can pass the Senate and will provide clean water for residents in Marinette and Peshtigo who are dealing with PFAS contamination," Nygren said in a statement.

Carly Michiels, of Clean Wisconsin, said residents of Peshtigo and Marinette are left relying on bottled water while the state ponders PFAS legislation. She said the amendment undercuts some of the work the state Department of Natural Resources has already done to move toward PFAS regulation.

The majority of states in the United States, including Wisconsin, don't regulate PFAS contamination. Hansen said Marinette and Peshtigo, along with the Twin Cities and Parkersburg, West Virginia, are the most contaminated sites in the country in terms of PFAS pollution. He emphasized, however, that this isn't a regional issue.

Hansen said the DNR is already investigating PFAS contamination at more than two dozen sites around the state.