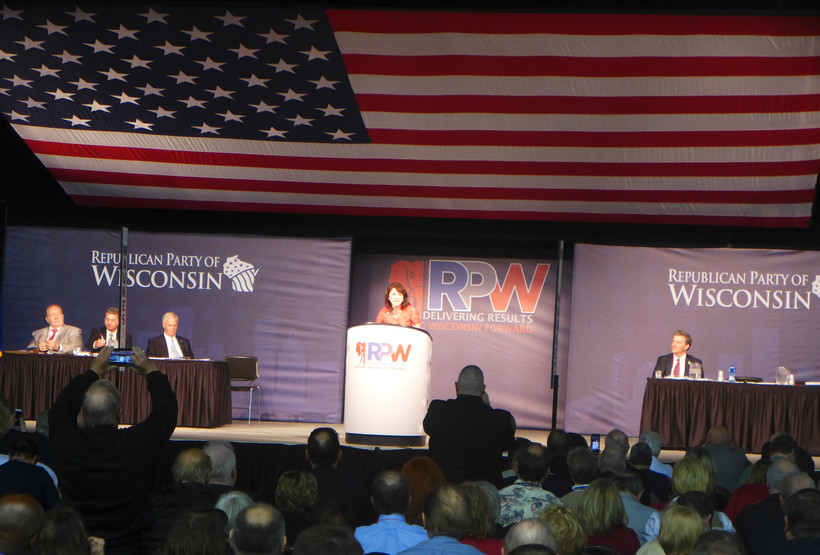 State Sen. Leah Vukmir has won the state Republican Party’s endorsement in the GOP primary for one of Wisconsin’s U.S. Senate seats.

Delegates at the Republican Party of Wisconsin convention Saturday in Milwaukee voted to give the party’s official support to Vukmir over her opponent, former Marine Kevin Nicholson. Vukmir received roughly 73 percent of delegates' votes, 60 percent is required to earn the party endorsement.

"Leah Vukmir is exactly the kind of U.S. senator that we want from Wisconsin," said former White House Chief of Staff Reince Priebus, who spoke in support of the senator at the convention.

Priebus lauded Vukmir's record as a "proven" and "lifelong" conservative.

Vukmir, R-Brookfield, was first elected to the state Legislature in 2002. She has been a vocal supporter of the state’s school voucher system and recently sponsored a series of bills increasing criminal penalties in Wisconsin.

The senator cast herself in her convention speech as a fighter who will take conservative Wisconsin policies to Washington.

"I am your fighter, I have taken on the tough battles, we have taken them on together — this year we are going to finish the job," she said.

Nicholson has criticized Vukmir for being an "establishment Republican," arguing he would bring a political outsider’s perspective to Washington. He has also downplayed the importance of the party endorsement.

"It will take outsiders to push back on this political aristocracy in Washington," Nicholson said in his convention speech.

"I surprised myself and everybody else by getting that endorsement," Johnson said Saturday. "That really paved the way for an election victory in November."

Johnson declined to call on Vukmir to apologize for an image released by her campaign that labeled incumbent Democratic U.S. Sen. Tammy Baldwin as being on "Team Terrorists." Johnson did say, however, "I wouldn’t do that."

The senator urged both Vukmir and Nicholson to avoid mudslinging in their campaigns.

"As you move forward with your campaign, do nothing to harm the other candidate," he said.

Vukmir and Nicholson will face each other in August’s partisan primary. The winner of that race will face Baldwin in November.