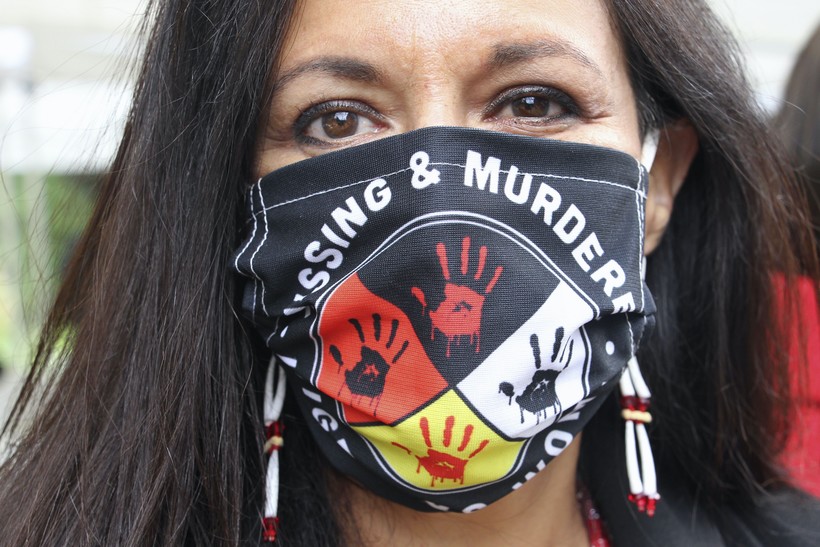 Efforts to bring attention to the problem of missing and murdered Indigenous women got a boost Wednesday as Native American leaders teamed with federal, state and local officials across Wisconsin to observe a day of awareness.

There are nearly 6,000 cases of missing Native American and Alaska Native women and girls in the United States, and researchers have found Native women are more than twice as likely as women of all races to be the victims of violent crimes. For years, advocates have called on political leaders and the criminal justice system to take action targeted at reducing these violent crimes and solving the thousands of missing-person cases that remain open.

It's an issue that is immediate to members of Native communities.

"It’s very real," said Bad River Tribe member Justine Rufus in a Wednesday appearance on WPR's "The Morning Show." "It is happening. It really impacts our communities. And we have to find solutions."

Rufus, a member of the Bad River Tribe and co-chair of the state's Task Force on Missing and Murdered Indigenous Women, said Wednesday's awareness events are a first step toward addressing the crisis.

Cities including Madison, Wausau and Appleton issued proclamations recognizing the day. In Oneida, community members held a walk and lit a fire in remembrance of victims; another walk was held in Forest County. And on Wednesday afternoon tribal and state leaders, including Gov. Tony Evers and Attorney General Josh Kaul, hosted a virtual event that highlighted the issue.

Esie Leoso Corbine of the Bad River Tribe said it's something that touches many in Native communities.

"I thought about growing up in Odanah as a young girl," Leoso Corbine said. "Looking around, thinking back on my classroom at the Indian school here, and there are women missing in that classroom, in those seats, because they were murdered."

Kaul called it a "solemn day that gives us an opportunity to remember the family members and friends, the community members who have been lost." Evers said "this work is critical and we must continue to bring light to an issue that is not new but has remained in the dark."

And Andrea Lemke-Rochon spoke about her cousin, Rae Elaine Tourtillot, who went missing in 1986 and was found dead in 1987.

"It's always been hard to understand why this happened to Rae Elaine, and hard to imagine that anything good could come from her tragic murder," Lemke-Rochon said.

She said she did find meaning in the work of the task force in trying to keep other families from going through what hers experienced.

The organized movement to recognize missing and murdered Indigenous women as a crisis is relatively new, but it has gained considerable political support in recent years. Republican President Donald Trump issued an executive order in 2019 aimed at addressing the issue, and was the first president to proclaim May 5 a day of awareness of the issue. In October, Trump signed into law a measure that established law enforcement guidelines for both federal and tribal investigators.

Federal efforts have continued under Democratic President Joe Biden. On Wednesday morning, Interior Secretary Deb Haaland, the first Native American to hold a position in a president's cabinet, said at a public event that the Department of Interior and the federal Department of Justice will launch a cross-departmental investigation unit to try to solve the crimes.

"It's heartbreaking to know that our loved ones are at an increased risk of disappearing without warning and that many times cases go unsolved and unaddressed, leaving families and communities devastated," Haaland said. "But I believe we are at an inflection point. We have a president and a government who see us, and we can't turn back."

Even though available data show high rates of violence against Native women, many advocates say data on Indigenous women's deaths are unreliable, and the real rate may be even higher.

The causes of that violence are complex. In some cases, reservations may be subject to gaps in law enforcement jurisdiction, or confusion among agencies as to who has jurisdiction over a given case. That can slow down investigations into missing persons, particularly in their early stages.

Other factors include high rates of poverty in some Native communities and the presence in some places of large numbers of male temporary workers. In North Dakota, for example, many of the workers staffing oil pipeline jobs are men in temporary posts, with few community ties.

In Wisconsin, Kaul created his task force on the issue after a bipartisan bill in 2019 never received a vote in the Republican-controlled Legislature. Its work has been slowed by COVID-19, Rufus told "The Morning Show." But families of those who have been killed or who have gone missing feel encouraged at the new visibility the issue has received.

Violence against Native women "has happened for generations, and we often don't see justice," Rufus said. "As we speak with the families, they're excited about the fact that this is starting to gain some awareness."