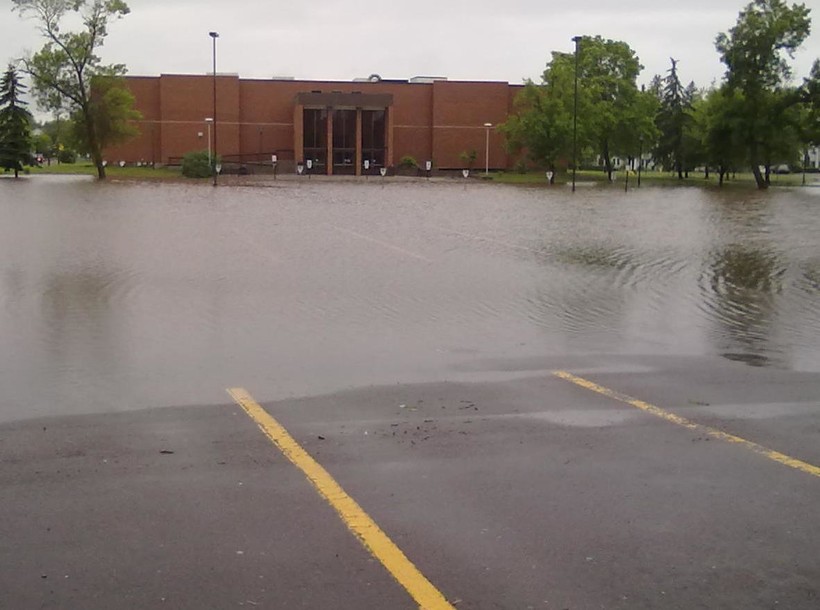 Duluth, Superior and Douglas County have declared states of emergency from flooding by a once-in-a-century deluge of rain.

Some homes are partially submerged with floodwater.  Others stand as islands from 18 hours of downpours.  UW-Superior’s Jim Dan Hill Library has books floating in ten feet of water in its basement.  Douglas County Emergency Management Director Keith Kesler says washed out roads and highways are causing havoc. “That particular washout is a classic example of why people need to be careful,” he says.   “We had an individual who came upon that washout kind of fast this morning and actually jumped it, doing significant damage to his vehicle but he was uninjured fortunately.”

Emergency crews and law enforcement have been working without rest for 24 hours.  Kesler says the flooding makes for some improvised ways to get around. “Just because there’s no route to get there,” he says.  “At one point this morning I heard the Town of Superior Fire Department was going down the railroad tracks to try to get around some of those washouts on the west side to try to put up some protective signs and barriers.”

Superior Mayor Bruce Hagen says he’ll ask for state and federal help, but until that arrives, he says neighbor will have to help neighbor.  “I drove by several homes that I just can’t believe they’re not destroyed.  And if there’s  people in them, they probably couldn’t exit without assistance,” he says.

From four-to-nine inches of rain fell beginning Tuesday evening.  Duluth National Weather Service Chief Meteorologist Mike Stewarts says that’s the third most in 140 years.   They knew it would be a gully washer, but this?  “There is no way that we would have known that we wouldn’t gotten a once in a 100 year, once in a century flood,” he says.

In Minnesota, Governor Mark Dayton has declared a state of emergency in the Duluth area and has authorized the use of the National Guard to assist.