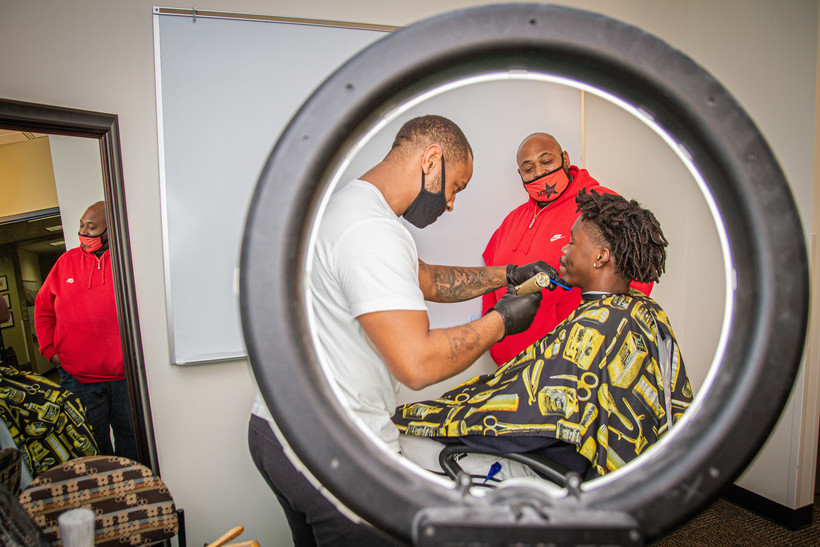 He started with 1 pair of clippers in Chicago. Now he has a third barber shop in Green Bay.
By Jonah Beleckis
Share:

As a child, Chris Kimbrough knew his mom, Mary Ann, wasn’t going to buy unnecessary items. She was a single mother in Chicago raising her son.

"She did what she could. I always respect and salute to my mother, she did exactly what she could," Kimbrough said. "But times were hard back then."

He watched other neighborhood kids take trips to the barber shop every other week and leave with cool designs or straightened hair lines. His family, however, couldn’t afford consistent visits.

He knew the value of a good haircut. It can provide the confidence for someone to go and get that job they’re after or finally talk to their crush.

So, Kimbrough wanted to see if his mom would buy him a pair of clippers. To this day, he said he’s not sure why he even asked. There had to be other priorities on her spending list.

But she said yes. He practiced on his own head, and he offered haircuts to his little cousins.

He started cutting hair at 14, got his license at 19 and last week, 42-year-old Kimbrough opened his third barber shop in Green Bay under the name Starz Barber & Beauty.

"You can be down. I always tell people that you can be broke, but if you get your hair cut, it’s something about it that gives you a self-esteem boost," he said. "It’s like a booster shot.

"I gravitated to the love of making people feel good," he continued.

Kimbrough knows the role of barbers in a city goes beyond a pair of clippers.

He hopes his customers feel at home in the chair — but he said recently on WPR’s "Central Time" that he wants that feeling to extend beyond his walls. Nearly 77 percent of Green Bay’s population is white and only 4.2 percent are Black, according to U.S. Census figures.

While he said his business is for everyone of all races or ethnicities, Kimbrough partnered with St. Norbert College and the University of Wisconsin-Green Bay to make sure Black students felt welcome in the community.

Jordan May, president of St. Norbert’s Men of Distinction group, said in a university video that it was hard to find the right barber in a predominantly white area. Then he discovered Starz Barber & Beauty.

"It kind of feels like family," he said in the video. "That connection you have in a barber shop is just unmatched."

Kimbrough’s newest location is inside UW-Green Bay’s student union. He said he put out flyers from the university’s wellness center because "you never know what someone is going through."

He appreciates how those who work for Starz Barber & Beauty also function as an informal community psychologist, counselor or an older sibling. Just giving customers a friendly ear can be valuable.

Kimbrough’s son, Chris Jr., has also taken on the role of community barber. Older and more experienced than the students he meets, Chris Jr. said he tries to share life wisdom he didn’t know when he was younger.

"I'm trying to guide them in the right way," he said in the St. Norbert video. "Do as much as I can, personally."

Kimbrough said he recently had a cancer-surviving student show up for his second haircut since finishing chemotherapy. He’s had a customer open up about having a child on the way.

Kimbrough credits his conversation skills to his time as a police officer in Arkansas, where he spent a lot of his life before moving to Wisconsin in 2013. He said he knows how to meet people where they are.

In 2020, after the murder of George Floyd at the hands of police, he said he held an event in front of his shop to have a community discussion.

"Let's come together. Let's talk. Let's try to prevent what happened in other communities from happening here," he said. "That's what I'm all about." 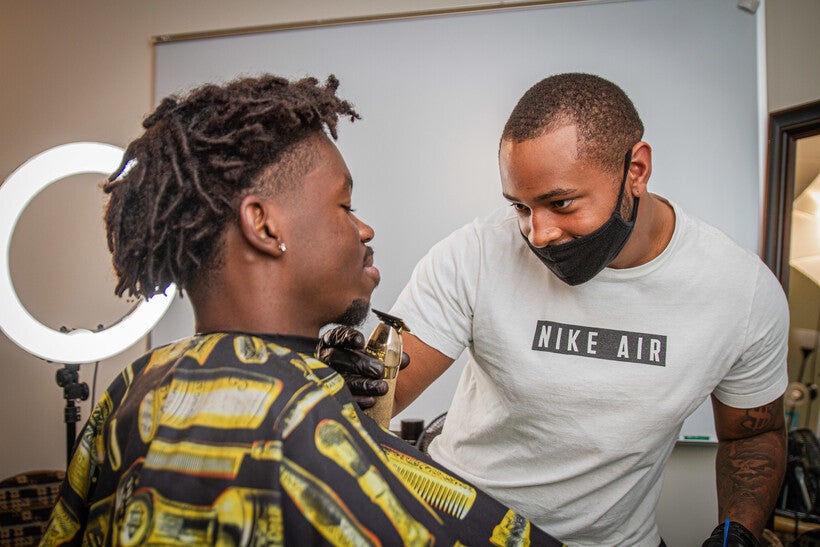 It took time, but he got one. He has five kids of his own, although he likes to say six, so he can count his nephew, too.

Some moved away but have since come back. They’re all in Green Bay now, able to enjoy big family dinners.

"I just love it. My wife would tell you now: 'I’d rather play with my kids like they is my brother and sister,'" he said with a laugh.

But there’s a piece missing from this happy portrait.

Opening a location at UW-Green Bay probably meant more to Kimbrough than his other openings because his mom was a teacher. Education was important to her.

In May, his barber shop gave two high school students — one each from Green Bay’s East and West high schools — scholarships in his mom’s name. They raised $2,500 for Ticin Steele to attend the Academy of Beauty Professionals and Diamond Hogan to study criminal law at UW-Green Bay, according to a Facebook post from the business.

Looking forward, Kimbrough just wants to make his family proud because he already knows his mom was proud of him.

"To be able to do these things, especially coming from where I come from and having one pair of clippers," he said. "This means so much to me."