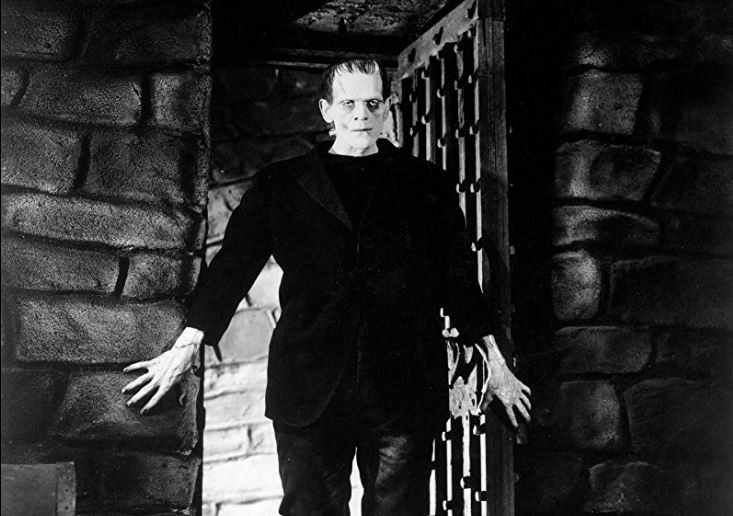 Poor Frankenstein. Author Mary Shelley's gothic creation long ago became a classic -- in literature and film -- and along with Dracula, werewolves and ghosts, has become a spokesmodel for the Halloween season.

And yet, the Frankenstein monster has largely been eclipsed in popular culture by other more alluring, expressive characters among the legions of the undead. Sure, seducing and sucking blood in a sexy cape or sporting hair, claws and fangs when the Moon is full give you a little more to do than hulking around as a mindless brute. (Even in those team-up movies or cartoons, Dracula is usually the leader of the troupe and Frankenstein is the enforcer.)

But let's not forget how Boris Karloff's star-making performance in the 1931 film outshone Bela Lugoisi's version of the count. And while there's many more movies and leading roles for all those photogenic vampires, some performers have gravitated to the monster's role because of the pathos it allows. And music is the soundtrack of pathos.

So although music has more than its fair share of songs dedicated to those villainous nosferatu, there are still many excellent and largely overlooked tunes dedicated to Frankenstein or what the monster has come to represent for pop audiences.

As a favor for those horror aficionados out there, here are a few Frankenstein-inspired songs that are worth adding to your playlist in time for the costume parties and trick-or-treating to come.

So, here’s my list — if you’re not too scared to look — in no particular order:

What a shock! Pop music's original shock rocker surprised audiences in 1992 with a paint-by-numbers musical favorite.

Polished and cleanly produced, "Feed My Frankenstein" is a well-designed sample of early '90s heavy metal. The chugging riffs, squiggly guitar effects and note-splaying solo align with "Headbangers Ball" best practices. When released and slotted in a radio DJ's playlist next to Motley Crue or Aerosmith, "Feed My Frankenstein" perfectly keeps to format.

For Cooper, this was the plan. "Feed My Frankenstein" came in the middle period of his career and at a point where his cultural cache was on the wane. No longer popularly seen as the made-up deviant corrupting the young with salacious heavy rock songs and scandalous onstage antics, Cooper was well on the road to being a hard-rock elder statesman. The song, a cover of a British hard-rock ditty, was an attempt to give Cooper's sluggish career a jolt of electricity.

On top of this came Cooper's well-received cameo in Mike Myers' "Wayne's World," which gave the singer some momentary relevance again. All these years later, Cooper's appearance is an artifact of the age's misplaced perspectives.

Unfortunately for him, Cooper's career revival was short lived. The onset of the grunge era and Cooper's anemic new material scared away many fans, particularly new ones, permanently. Today, Cooper continues to tour on the oldies circuit and hosts a radio show, a fate that any young entertainer might have nightmares about.

The Misfits "Ghost of Frankenstein

Praising a song by the post-Glenn Danzig version of the Misfits might be an easy way to elicit a slasher-flick scream.

But even without their brooding, muscle-bound frontman at the helm, the Misfits have continued to fly the flag that celebrates the group's unique blend of punk and metal with an overdose of Universal horror-movie imagery.  And it has worked. After all these years, the Misfits' legacy still stalks popular culture. Their logo has an enduring ubiquity, they're still namechecked by metal's elite and the modern-day band's shifting lineups has at various times included former members of both the Ramones and Black Flag.

"Ghost of Frankenstein" is proof that the Misfits aren't only a nostalgia act. Featured on the 2011 album, "The Devil's Rain," the cut is a Motorhead-influenced full-frontal assault.  More metal than punk, "Ghost" is a war cry set to energize the band's army of dark-side outcasts and grim basement dwellers. Led by moaning bassist Jerry Only -- the last remaining original member -- and featuring crunching riffs from ex-Black Flag guitarist Dez Cadena and a clean sonic field of view courtesy of former Ramones producer Ed Stasium, "Ghost" is a 2-minute piece of candy for those who wish they could trick-or-treat year-round.

The latter-day Misfits' output wasn't always like this. But the Misfits' efforts and enduring presence on the road kept the band's name out there. This legwork was important undergirding and when Danzig and Only made common cause in 2016 to get the original group together, the reunited band could headline festival stages. Talk about scaring up business.

Ice Cube was once among rap music's most-feared rhymers. You could hardly blame anyone these days for not knowing (or remembering) his past life. With Hollywood success, his legend as a formidable rapper during hip-hop's golden age is largely forgotten to the lay public. Of course, the success of the biopic "Straight Outta Compton" and N.W.A.'s induction into the Rock and Roll Hall of Fame were powerful reminders that reveled in the skills that Ice Cube could once command as lyricist and performer.

In the '90s, however, Ice Cube's future was less certain. He had made his bones as a hard-swinging (and controversial) MC and Cube's first solo records were ultimately successful in making him bankable and influential apart from his erstwhile gangsta-rap crew. But, as the years continued, his music became tamer, less compelling and film work became a safer and more lucrative job option.

"Dr. Frankenstein" is the one of the few standouts from Cube's disappointing fifth album, 1998's "War & Peace Volume 1 (The War Disc)." Success and the acting bug catapulted Ice Cube away from the streets and robbed his raps of the grit and urgency that had made him lethal behind the mic. In subsequent releases, Ice Cube toyed with new and different approaches in an attempt to rediscover the plot.

"Dr. Frankenstein" is a more appealing experiment. It's almost a monster-movie sketch told with G-funk cadences, a sprinkling of scary movie tropes and starring Cube as the barking-mad mad scientist. The track is a less over-the-top twin to Cube's screamfest teamup with Dr. Dre on "Natural Born Killaz." Ice Cube still sounds furious as he ducks and weaves around the beats. An eerie haunted mansion organ howls and Cube invokes a few Parliament-Funkadelic-style chants and it's really enough to be entertaining. (In this case, "Dr. Frankenstein" replaces "Dr. Funkenstein.")

The song wasn't enough to resurrect his music career, but it demonstrates Cube's skills were still sharp even if his image was becoming more family friendly.

Antony and the Johnsons "Frankenstein"

On the surface, this is an old-fashioned piano ballad. Deeper listening reveals that "Frankenstein" is a remarkable and moving declaration of love.

The song was released in 2005 as a B-side for the single "Hope There's Someone," but it's hard to imagine this could be so undervalued. Anohni (formerly known as Antony) gives a performance that transmits passion, sadness and strength -- disguised in poetry -- that should make any listener get a lump in their throat.

Piano chords make for a stark accompaniment. Completing the picture, Anohni, at her core, is a torch singer. Yet, she never devolves into cliché. Her wavering voice somehow creates a mood so that a jaded audience can feel this love song like it's the first time.

The emotionality of this song is only enhanced by the lyrics, which appear to give voice to a member of the transgender community. And if that read into the words is accurate, this song is a most apt expression of feeling that could have a special resonance for those typically left out of pop music because of its binary world view.

Here, perhaps, "Frankenstein" is quite literally a rallying cry.

There's probably no better ode to Ol' Flathead than the Edgar Winter Group's 1972 smash instrumental. The song, which briefly topped the Billboard charts a few months after its release, is an exquisite fusion of '70s stadium-rock pomposity, proggy conceptualism and some free jazz sonics. Here's some high-brow art decorated to appeal to popular tastes.

The track is the perfect distillation of its creator's unorthodox musical vision. Edgar Winter, brother of Texas bluesman Johnny, chose a more expansive view of music than his guitar-slinging bro. Edgar Winter's music straddled several genres and gave him a career as a trailblazer.

Story has it that "Frankenstein" got its name from how it was spliced together in the studio, but one can hear this song as an assembly of different modes swiftly stitched together into a splashy groove. In particular, listen to how Winter moves from the synthesizer -- a rare instrument to utilize for that time -- and then the saxophone before dueling with the drummer. This is a thrill ride of angular funk that promises new turns as each soloist steps forward.

This 1973 performance, captured on "The Old Grey Whistle Stop" in the United Kingdom," gives a glimpse of the body-suited band performing in their highly feathered, swaggering glory. Take special note of how Winter plays his keyboard, which is suspended via a strap. Winter's dream would later be realized in the '80s with the keytar.