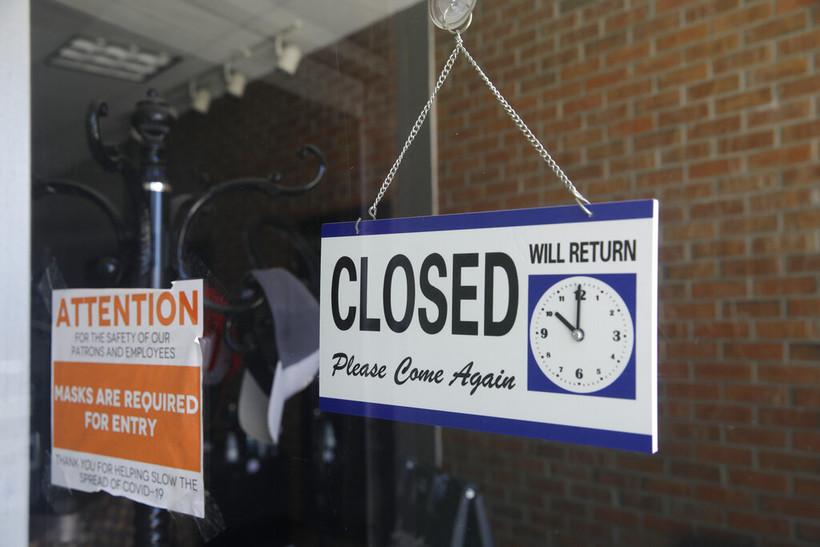 In this July 18, 2020, file photo, a closed sign hangs in the window of a barber shop in Burbank, California. Marcio Jose Sanchez/AP Photo

Nearly 28K Who Were Denied Pandemic Unemployment Assistance In Wisconsin Could Be Eligible Under New Guidelines
By Rob Mentzer
Share:

Tens of thousands of people in Wisconsin whose applications for COVID-19 pandemic unemployment benefits were denied could be eligible for up to 79 weeks of unemployment payments.

There are three main categories of newly eligible workers:

Officials with the state Department of Workforce Development said they would be mailing notices to nearly 28,000 people who were denied benefits under the federal Pandemic Unemployment Assistance program to let them know they are eligible to reapply under the expanded guidelines. If they were denied before but found to be eligible now, they could be paid for the entire period of the pandemic thus far.

"We know thousands of Wisconsinites, many of whom have pre-existing conditions, did not feel safe returning to work as the pandemic swept across our state if their employers chose not to enforce safety precautions," DWD Secretary Amy Pechacek said in a statement.

The Biden administration announced expanded eligibility for the federal program in February after President Joe Biden in an executive order said workers whose employers didn't follow safety protocols could get the benefits. The Wednesday announcement by DWD follows from that executive order and guidance from Biden's Department of Labor.

State and federal unemployment systems were overwhelmed by claims in 2020 after public health measures to slow the spread of COVID-19 forced many businesses to close and many more to scale back hours. In the year since the pandemic took hold, applicants have been frustrated by long waiting times for information and benefits, a massive backlog for state benefits and confusing, sometimes contradictory information given by state employees.

In practice, a relatively small number of people will be able to claim a full 79 weeks' worth of benefits, said Chenon Times-Rainwater, co-founder of the Wisconsin Unemployment Action Group.

Many people who lost jobs early in the pandemic and struggled with benefit delays have been forced to find other work. There are also many Wisconsinites who have tapped personal savings, leaned on family members or went into debt as a result of the pandemic.

On Wednesday, some members of social media groups, started to provide support for those dealing with the unemployment system, were expressing renewed frustration and pessimism that the latest announcement would benefit them. That's because the process for claiming benefits under the newly expanded eligibility is likely to require would-be recipients to fight new bureaucratic battles, Times-Rainwater said.

"The employer is going to argue and say, 'Yes, we provide all of these' (COVID-19 precautions)," Times-Rainwater said. "And the employee is going to say, 'No, you didn't.' It's going to be a 'he said, she said,' and it's going to end up going to hearings."

That process, too, can take months.

Wisconsinites who weren't previously denied federal Pandemic Unemployment Assistance can also apply under the expanded eligibility. However, they'll be limited in the number of weeks of back payments they can claim.

UW Board of Regents identifies 2 finalists for UW System president
Judge rules absentee ballot drop boxes not allowed under Wisconsin law
6 people have been injured in a mass shooting in Oregon
'What we got is what we got': Wisconsin grocery store owners say worker shortage is making it harder to keep items on shelves
In-person visits suspended at Wisconsin prisons as COVID-19 cases triple among inmates in 1 week