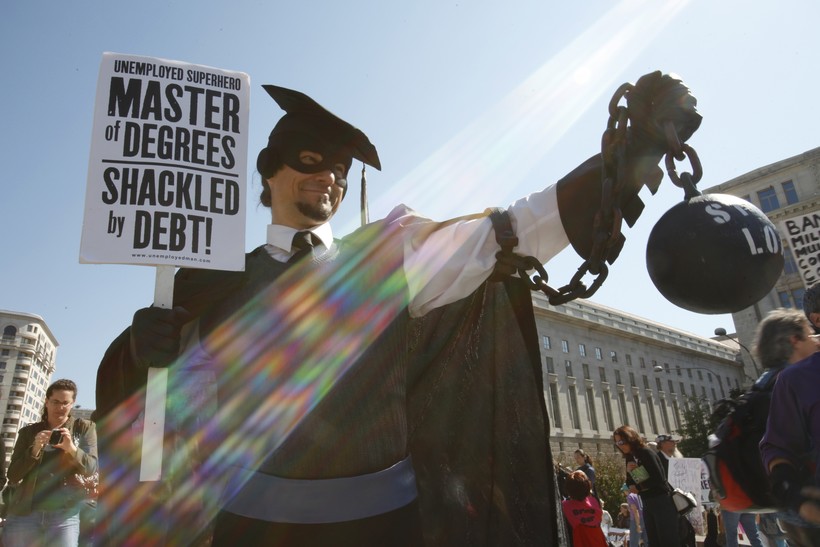 In this Oct. 6, 2011 photo, Gan Golan, of Los Angeles, dressed as the "Master of Degrees," holds a ball and chain representing his college loan debt, during Occupy DC activities in Washington. Jacquelyn Martin/AP Photo

Student loan debt is a problem across the United States, and Wisconsin is no different.

In the University of Wisconsin System, 72 percent of students borrowed money toward their bachelor's degrees and the average debt upon graduation is $30,771.

That can take years to pay off, and some companies in Wisconsin are offering student debt repayment as an employee benefit.

American Family Insurance, headquartered in Madison, began offering student loan reimbursement last year. They provide up to $100 each month for up to $10,000 total, provided the employee graduated within three years of their hiring, according to spokeswoman Linda Wagener.

Esker, an artificial intelligence company with a corporate headquarters in Middleton, rolled out its own student loan repayment benefit.

Donarski said that, for Esker, student debt assistance is a logical extension of their previous benefits package.

"We’re very big on retirement and saving for retirement, and we keep making enhancements to our 401(k) plan," Donarski said. "My assistant controller, when she brought this forward, she said, 'Well, maybe some of the reason people aren't saving is because they've got debt.'"

Donarski said she hopes the benefit will help employees pay off their student loans so they can begin saving for retirement.

At Esker, employees can receive $100, $125 or $150 per month toward their student loans, depending on how long they have worked at the company. The benefit will expire after five years of payment.

"When I last checked, about 50 percent of our workforce is now in the millennial category, so there's a lot of student loan debt out there," Donarski said.

Several business publications, including Harvard Business Review and Forbes, have named it a top-ranking benefit, especially when it comes to millennials.

LGBTQ grads and those of color owe more, on average, and women hold two-thirds of all student loan debt nationally.

Some major employers in the Madison and Milwaukee areas, including Epic and WEC Energy Group, do not currently offer such a benefit.