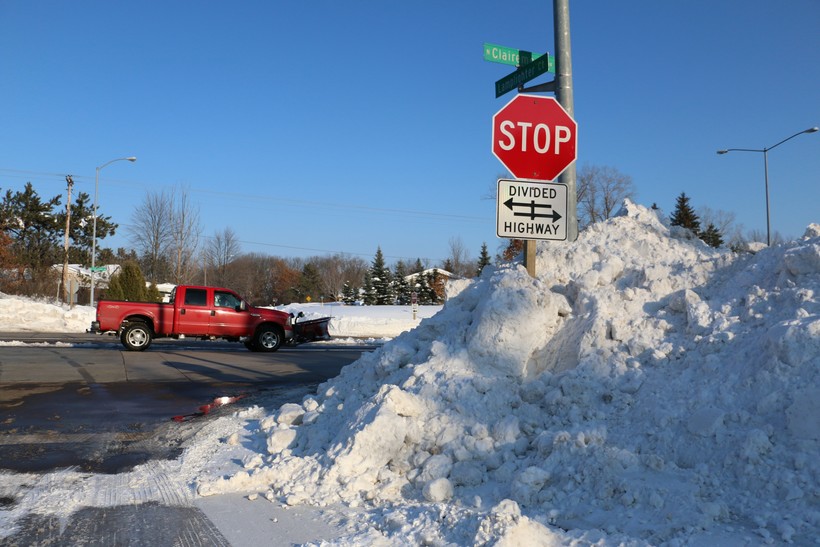 Snow piles up on Clairemont Avenue in Eau Claire. The city broke its previous record for snowfall in February, surpassing the 28.2 inches that fell in 1936. Rich Kremer/WPR

Some Wisconsin Cities Set New Snowfall Records For February ... And It's Not Over Yet

Some Wisconsin cities are seeing record snowfalls for the month of February. And it’s possible a few might surpass records for the winter season.

Meteorologist Ben Miller with the National Weather Service Office in Milwaukee/Sullivan said Eau Claire could surpass the seasonal record of 61.6 inches set during the 1996-1997 winter.

"I would say that’s probably a pretty good bet that they’re going to surpass that record here by the end of the month," Miller said of Eau Claire.

La Crosse is also close to setting a new monthly record since it’s about 4 inches shy of surpassing the record of 31 inches set in 1959. Just across the border from Superior, Duluth is about a half-inch away from breaking the record set in 1939, according to Dan Miller, science and operations officer with the National Weather Service Office in Duluth.

"It’s really been the last four to five weeks where we’ve really kind of not only turned the switch, but then put the dial on maximum, so to speak," he said. Miller said February is not typically a snowy month.

"A lot of times in February, the storm track is south of the Upper Midwest, tracking from the Central and Southern Plains into the Ohio and Tennessee Valley and the Mid-Atlantic region," he said.

Miller said the increased snowfall started with a pattern of colder temperatures that settled on the region in mid-January.

"The beginning of the winter season, the first month-and-a-half or so was relatively small amounts of snow and we were sort of running behind schedule," said Hopkins. "But, then, in the last four weeks — almost three, four weeks — we really shot up."

Hopkins said the El Niño event has been slower to develop, adding the last month has been extremely cold in the western half of the U.S. with warmer weather in the southeastern part of the country.

More cities could be posed to set records for the month or season with another storm on the way this weekend. Miller said another storm could bring up to 1 foot or more of snow to central and northern Wisconsin beginning on Sunday.