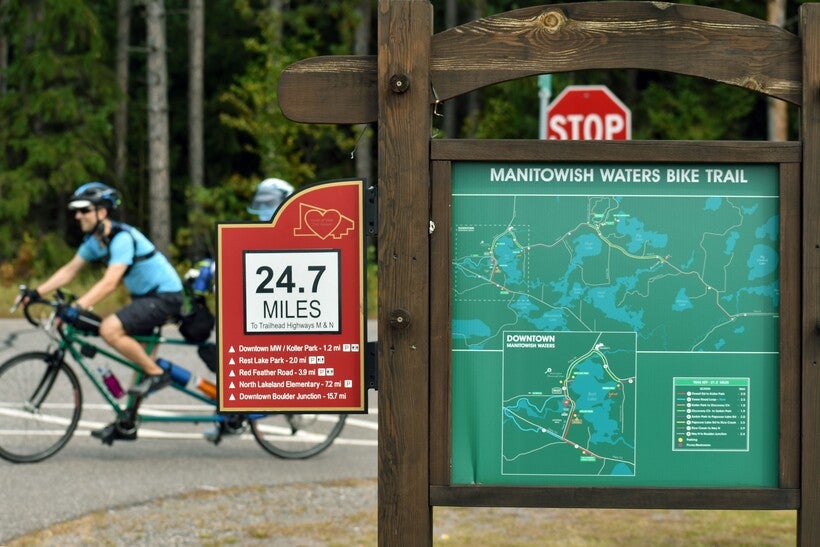 The beauty of northern Wisconsin and outdoor recreational opportunities is one factor that draws in city residents who are contemplating a move up north. Vilas County has 45 miles of paved trails, such as those seen here in Manitowish Waters on Tuesday, Sept. 15, 2020. Danielle Kaeding/WPR

The leaves are just beginning to turn on a mid-September day as the wind whips across the waters of Manitowish Lake. The sun is warm and a couple anglers sit by the dock, but there's little sign of anyone else at the Chippewa Retreat Resort in Manitowish Waters.

Looking toward the lake, Kathy Schmitz said it's easy to see why people are moving out of the city to a place like this.

"To sit out on a gorgeous deck like this with the trees blowing, have your laptop with you or your cellphone and be able to work — this is your office," she said.

The phone has been ringing off the hook at the Vilas County Economic Development Corp. since March from people thinking about moving north due to the pandemic, said Schmitz, the corporation's executive director. 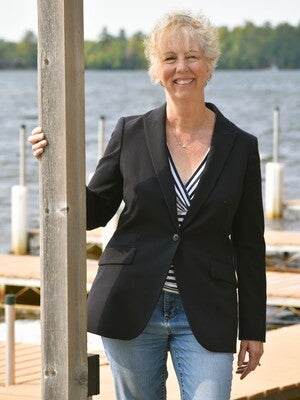 Kathy Schmitz, executive director of the Vilas County Economic Development Corp., stands on the dock by the Chippewa Retreat Resort on Manitowish Lake on Tuesday, Sept. 15, 2020. Schmitz said she's been getting calls regularly since March from people who are weighing a move to northern Wisconsin. Danielle Kaeding/WPR

Economic development officials say there's been an influx of seasonal and second homeowners working remotely after COVID-19 shut down business as usual. Now, they say some of those people are weighing whether to turn a temporary getaway from the city into a permanent lifestyle change.

Just a half hour down the road, Kat Bramley and her husband Jared Davis just moved from Chicago to Minocqua in Oneida County. The pair of 34-year-olds lived in the city to pursue careers as actors, but they always planned to move away someday. They were scraping gigs together when the virus shut everything down.

Bramley always had a strong connection to the area. She grew up spending summers at an all-girls camp where she became a counselor, and the couple got married in Minocqua four years ago.

They came up north in June to her aunt and uncle's lake house, and Davis found out about a job opportunity in Minocqua. She said that prompted them to think seriously about moving.

"The pandemic definitely sped up leaving the city and pushed us in a direction that we had never really anticipated, but are really excited about now," said Bramley.

Bramley said they were drawn by the beauty of the area and the low cost of living. Once they started looking, she realized they could get a lot more for their money up north than in the city.

"We want to like be able to save and have a family in the near future, and that just all feels way more manageable in a place like Minocqua versus Chicago," said Bramley.

While Bramley and Davis are renting, the market for home sales in the area is red-hot, said Jim Mulleady, a broker for the real estate franchise Coldwell Banker who covers seven counties in northern Wisconsin. He said a lot of sales appear to be related to the pandemic.

"Sales in April and May were very poor because of COVID. Really, we were selling homes, but not yet closing on them," said Mulleady. "And, then, June, July and August have been just unbelievable."

He said they sold 236 homes in August, beating a previous one-month record of 215 homes sold in July 2007 before the housing bubble burst.

The target market is typically those living in places like Milwaukee or across the border in Illinois who can afford waterfront property. In Vilas County, more than 60 percent of homes are considered seasonal. 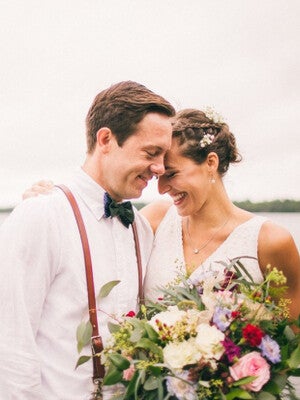 Kat Bramley, left, and Jared Davis tied the knot in Minocqua in 2016. The couple moved up to northern Wisconsin in early September 2020. Photo courtesy of Kat Bramley

The Wisconsin Realtors Association reports home sales are up more than 8 percent to date in Oneida County, where Bramley and her husband live. In neighboring Vilas County, sales are up 22 percent so far this year.

Rumors have been flying about hundreds of new children attending school in the area, said Justin Szews, principal of Lakeland Union High School in Minocqua. He said in reality, there's been a slight uptick of roughly 30 students at the high school, with around 760 children enrolled this year.

"We did see a slight increase of enrollment at a time when typically semi-rural places like us are kind of in a downturn in enrollment over the last 15 to 20 years," said Szews.

He said enrollment has remained relatively flat over that time, with around 715 to 730 students each year.

A handful of new families he's talked with have indicated that they always thought about moving to the area after vacationing there and now seemed like the best time. 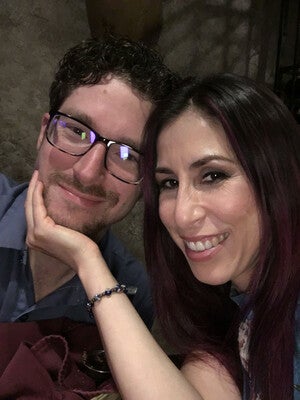 Lizeth Lanz Schattner and her husband Will wanted to make the move north for reasons similar reasons to Bramley and Davis.

The two lived in an expensive home near San Diego, and they wanted to get out from under their bills.

Her husband is from northern Wisconsin, so they began looking for homes to rent in Minocqua, but that was hard to find. Eventually, they moved up to Eagle River in February just before the pandemic hit.

"I feel like we just got out in time," said Lizeth.

Lizeth said she got her license to open a spa in Eagle River right before everything shut down. Since then, she's been able to begin providing services and her husband is able to work remotely providing technical support for a company that provides infrastructure to data centers.

Safety wasn't a driving factor in the couple's decision, although Lizeth said northern Wisconsin feels more "laid back" than cities with restrictions seeking to curb the spread of the virus. When clients come for appointments, she takes precautions by wearing a mask and doing enhanced cleaning.

The low cost of living, serene setting of the Northwoods and space drew both couples to northern Wisconsin. Yet, places like Oneida and Vilas counties are not immune to the virus, and they're seeing a high level of COVID-19 activity just like every other county in the state.

A Harris poll conducted during late April found 39 percent of roughly 2,050 adults were thinking about moving from cities to less-crowded areas due to the COVID-19 crisis. Those under 35 were more likely to consider making a change.

Rural sociologist Ben Winchester with the University of Minnesota-Extension points out young professionals and families with children have been making the move to rural areas long before the pandemic.

"There has been a regular influx of people in their 30s, 40s, and 50s moving into just about every rural county in the country," said Winchester.

While reasons vary, Winchester said they often include a desire for a simpler life, safety, more affordable housing and outdoor recreation. Teens may be leaving small towns after graduation, but research he's conducted in neighboring Minnesota show the number of people who are 30 to 49 years old increased in rural counties from 1990 to 2000

In Wisconsin, rural counties grew faster than their urban counterparts during the same decade. But two-thirds of the state's rural counties lost population between 2010 and 2018, according to a report released earlier this year by research firm Forward Analytics. Some counties, like Vilas, have seen population gains and an increase in income.

Forward Analytics Director Dale Knapp said some studies show more people will be working remotely when the pandemic is over.

One study by Harvard Business School found 1 in 6 workers will continue working remotely after the pandemic, according to surveys of 1,770 small business leaders and 70 business economists. Remote work is more likely among industries with workers who are higher paid and better educated.

Knapp said remote work could be an opportunity to reverse the population loss trend for some rural counties.

"People don't make these residential decisions lightly," said Knapp. "Just because now you're able to work remotely, doesn't mean that you immediately, you know, pack your bags and move."

He noted people are often drawn to cities because of amenities that rural areas can't provide, and cautioned that remote work alone won't solve population loss in rural areas. But it could be part of a solution for some rural counties. He said areas that are closer to urban centers like Dodge, Dunn, and St. Croix counties are more likely to benefit.

Even so, currently less than half of workers employed across all industries can work remotely, according to Bureau of Labor Statistics data. 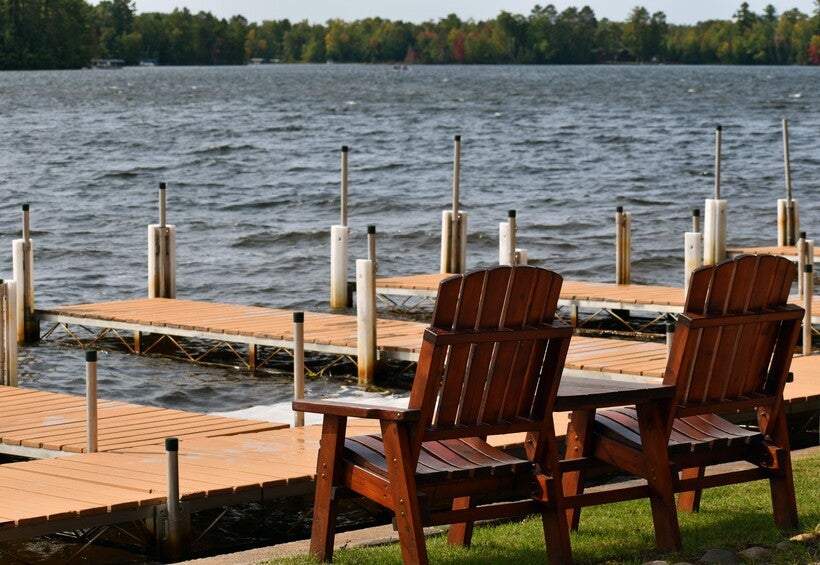 People living in the city are lured to northern Wisconsin by the lower cost of living, slower pace and waters like Manitowish Lake as seen above on Tuesday, Sept. 15, 2020. Danielle Kaeding/WPR

Both Knapp and Winchester agree it's too early to tell what role the pandemic may be having on movement to rural areas.

A study released by Zillow in August found that there hasn't been widespread migration from urban areas to the suburbs, with a few exceptions that include expensive coastal cities like New York and San Francisco.

A senior economist for the online real estate database noted that report didn't compare sales between urban and rural areas.

A more recent Zillow report found the freedom to telecommute could prompt around 2 million renters in the United States to buy homes in a cheaper location.

"They are actually having conversations with their bosses, their employers: 'Can I stay here and do it from here in Vilas County?'" said Schmitz.

For some families, a move to rural Wisconsin may be permanent. Others plan to return to their primary home in the city once the pandemic is over.

Talking via Zoom from their new home, Bramley said she isn't sure if Minocqua will be the couple's forever home.

"We're just feeling grateful to be in a beautiful place with an easy pace," she said.

Turning to his wife, Davis indicated he's pretty sold on staying after his first day of work doing maintenance at a summer camp in Minocqua.

"I was just looking out over the water and the leaves changing," he said, smiling at Bramley. "So, you're going to have to drag me away kicking and screaming, I think."

Bramley said they've loved being up north during the summer, but she expects winter in northern Wisconsin will be an entirely different experience.