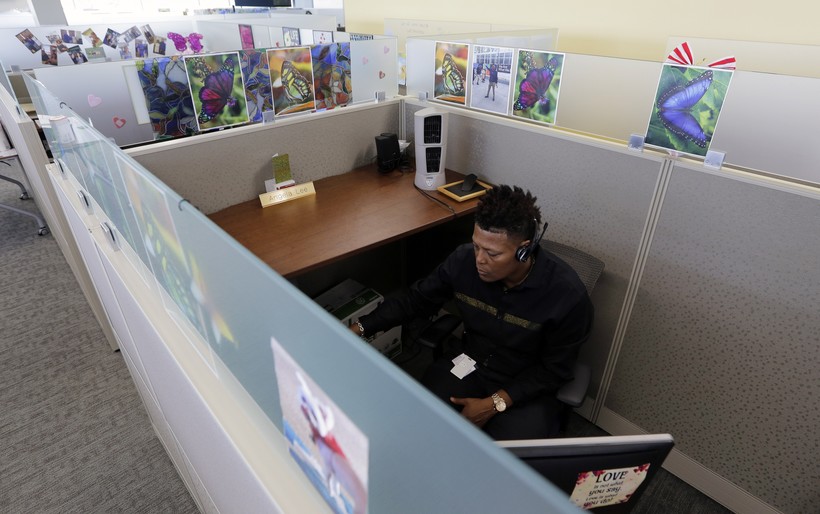 Fewer Hungry Office Workers Have Caused Upheaval For Some Businesses, But Others Faring Better During Pandemic
By Rachael Vasquez
Share:

Farmer's Fridge, a company that makes fresh meals and distributes them through a network of smart fridges in places like Milwaukee and Wauwautosa, provides a service that many office workers often were in need of before the pandemic: healthy breakfast, snacks and lunch.

But when the pandemic struck in March and scores of Wisconsin's office workers began working remotely along with their peers in the rest of the country, that meant upheaval for the company.

"We basically lost 85 percent of our revenue in a two-week period," said Luke Saunders, founder and CEO of Farmer's Fridge.

The vast majority of the company's customers are offices, businesses and airports, according to Saunders. Many places where Farmer's Fridge normally sold food were nearly emptied out in a matter of weeks.

"Everything was changing day by day, so we were at a point where we were meeting with our team and the board (of directors) every week just to tell them like, 'Here's what the latest is,' and how we're responding and what's going on," he said. "I think that was a big part of just being adaptable and the constant communication, constantly reassessing what the situation was."

Fooda, a company that partners with local restaurants to bring pop-up restaurants to workplaces, said the early days of the outbreak were also difficult.

"Our business essentially stopped over a period of just a few days," said Stafford McKay, the head of marketing and communications at Fooda, referring to mid-March when states across the U.S. were beginning to unveil stay-at-home orders. "So that was very challenging for us."

The company operates in a few dozen cities across the country, including Milwaukee. McKay said the period was especially challenging for the local restaurants Fooda partners with "who depend on this business as a daily revenue generator."

But for Tryg Jacobson, the founder of a Sheboygan co-working space called Jake's Cafe, the pandemic hasn't had the same effects.

Jake's Cafe leases office space through annual contracts. Those that work there pay monthly membership fees, meaning when the business had to shut down in March — like most under Gov. Tony Evers' now defunct stay-at-home order — the shutdown didn't significantly interrupt the company's main revenue stream.

"Jake's Cafe was empty for about a month," Jacobson said. "But we actually took that time to rethink a lot about what we were doing."

Jacobson describes his customers as a near even mix of "right-brainer" creative-types and "left-brainer" professionals with jobs in finance and legal services. He said now, six months into the outbreak, almost all of them have returned to working at Jake's, leaving him optimistic about the workspace's ability to continue throughout the pandemic.

For many who work in co-working spaces like Jake's Cafe, there has always been an option to work-from-home in some form. But, Jacobson said, many of those workers have already made a deliberate choice not to work at home for reasons that have not gone away since the start of the outbreak.

"They come in because they need to get away from all the things that typically pull them away from work when they're at home," he said. "Little chores, kids that need attention, a phone that keeps ringing."

Preparing For A Future With More Remote Work

Both Fooda and Farmer's Fridge have worked to reconfigure their businesses as the pandemic continues and many office workers remain at home.

Farmer's Fridge has shifted to deliveries of fresh-made meals sent directly to workers' homes, and wholesale business like catering for hospitals and universities.

"We decided, ultimately, we can't just wait for fridges to come back online," said Saunders. "We're going to need to adapt our business model to make sure, no matter what reopening looks like or how long it takes or where our customers are, we are serving them, and we've got a way to survive the next few years."

In addition to offering companies the ability to send care packages to employees, Fooda is also seeing a shift in what customers are its core business.

McKay noted that companies use Fooda, which gives employers the option to subsidize their employees' meals, as an added benefit to help attract and retain workers. He said the need to do that hasn't gone away with workers at home, but Fooda is seeing more business in industries where workers are in high-demand, like distribution centers and industrial workers — where companies may feel a greater need to incentivize workers to stay onboard.

McKay and Saunders both see opportunities for their companies in a future where the COVID-19 outbreak hasn't gone away.

McKay said, as offices begin to reopen, many are reducing elevator capacity, leading to long lines, as well as safety measures like temperature checks before entering. The hassle of coming and going at offices now makes the idea of bringing food to employees much more attractive, according to McKay. This is in addition, he said, to the idea of reducing exposure for employees who would often be venturing out for lunch.

Saunders said despite workers being at home, he knows many of their lives haven't gotten less busy.

"I was getting constantly pinged from people in my own network that were like, 'I haven't eaten lunch in a week because I just haven't had a chance to figure out what my new routine is going to be now that I'm at home,'" he said.

He said Farmer's Fridge has been able to shift its business quickly because they make their food at a central location and ship it with a network of their own drivers.

"Now we're in the phase where ... this could be ongoing for quite some time, so we're glad we did that," Saunders said.