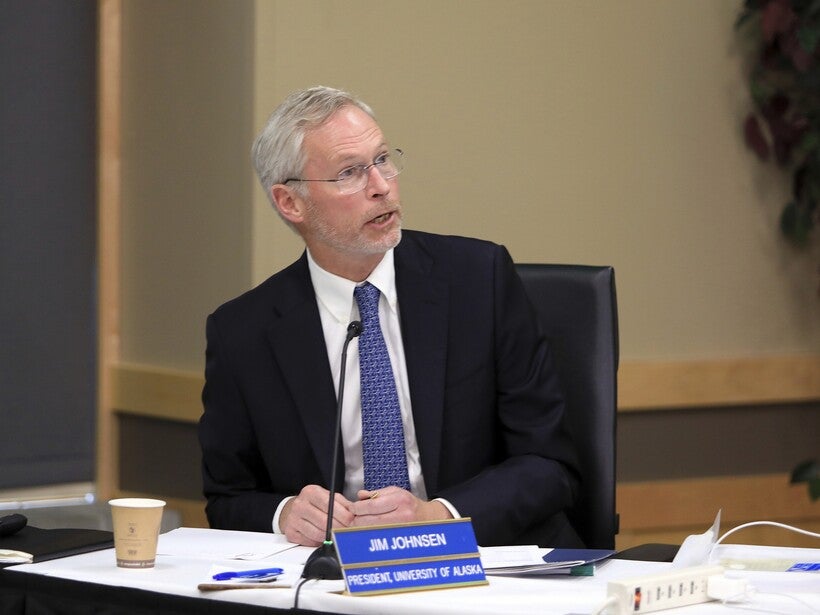 University of Alaska President Jim Johnsen speaks at a UA Board of Regents meeting, Tuesday, July 30, 2019, in Anchorage, Alaska. Facing severe budget cuts, regents voted 8-3 to authorize Johnsen to immediately reduce administrative costs and prepare a plan for a transition from three accredited institutions to one. Dan Joling/AP Photo

The single finalist up for consideration as the next president of the University of Wisconsin System has withdrawn his bid for the job.

"After deep reflection as to where I am called to lead a university system through these challenging times, it is clear to me and my family that it is in Alaska," said Johnsen, in a statement included in the release. "I appreciate the strong support from the search committee at Wisconsin, and for all those who supported my candidacy, but it’s clear they have important process issues to work out."

A search committee had been planning to meet on Friday to determine whether to recommend that the Board of Regents hire Johnsen to replace current president Ray Cross, who has held the position since 2014.

Johnsen has been president of the University of Alaska System since 2015, where he oversaw work that resulted in about 40 programs being approved for elimination last week.

His decision to withdraw comes after the UW System faced criticism for only having one finalist in contention for the job. The search process has also been criticized from the start by some faculty and staff because it does not include members of shared governance bodies or students.

Groups like the state’s American Association of University Professors chapter had demanded that the Board of Regents start the hiring process from scratch, circulating a petition that collected thousands of signatures from students, staff and alumni.

"I think it's a positive for the system because I don't think Dr. Johnsen was the right leader for the UW system, particularly at this time," said Dolan. "But I'm sad that it had to happen because governance reps have been talking with the search committee since its formation about how problematic the committee's formation was, in that it didn't include any governance reps at all."

Dolan suggested that if faculty, staff and students had been allowed to serve on the UW presidential search committee, the process would have been more successful. She said in that scenario, Johnsen may not have even been nominated as a finalist since, because of what she described as a lack of experience with academia.

Dolan said it's likely that the COVID-19 pandemic and financial challenges faced by all higher education institutions played a role in the failed search, but she said the process and opposition from shared governance groups also impacted the result.

State Rep. Katrina Shankland, D-Stevens Point, who has also been critical of the search committee makeup and process, issued a press release saying the failed search was "dishearteningly predictable."

"It is understandable that a candidate would not wish to serve under these circumstances, with their legitimacy being questioned by shared governance stakeholders before they have even begun," Shankland said. "This is what I said would happen in November 2019, along with thousands of other shared governance stakeholders. No one can say the committee wasn’t warned that their exclusion of the people most affected by this decision would backfire."

Statements released by the Wisconsin Conference of the American Association of University Professors and the American Federation of Teachers-Wisconsin welcomed the announcement that Johnsen dropped out of the running, while also blaming the exclusion of shared governance groups for a failed search.

Michael Poliakoff is the president of the American Council of Trustees and Alumni. He said universities across the nation are fighting for survival after suffering unprecedented revenue losses, after students were told to stay home in March to prevent the spread of COVID-19 on campuses.

"Having said that," said Poliakoff, "it doesn't surprise me that there would be remarkable and sudden shifts in job searches. I have heard of, not exactly the same thing happening elsewhere, but similar falling off of candidates."

Poliakoff said it's also important to remember that university governing boards carry the primary responsibility for choosing presidents. Therefore, he said it's appropriate that search committees make hiring decisions, though shared governance should be heard leading up to that point.

A written statement released by the UW System on Friday quoted the president of the Board of Regents, Drew Peterson, as saying this marked a "dark day for the UW System."

"Dr. Johnsen is a fine person who conducted himself with professionalism and honor throughout the process, during which he was unanimously identified by the search committee as the best candidate for our system," Peterson said. "We will work to identify and get through our immediate financial and operational challenges with the pandemic, then deliberate on the next steps to conduct a new search when there is a better opportunity."

A UW System Spokesman said no interviews would be granted about Johnsen's withdrawal.

"This is a disappointment," said Vos. "If leftist liberals on campus can't decide on the UW System President, they become critics and drive out a qualified leader. We can’t let intimidation become the way we choose our campus leaders."

A statement released by the UW System on June 2 announcing Johnsen as a finalist had said other applicants had withdrawn from consideration over concerns about "being named publicly as a finalist during the pandemic."