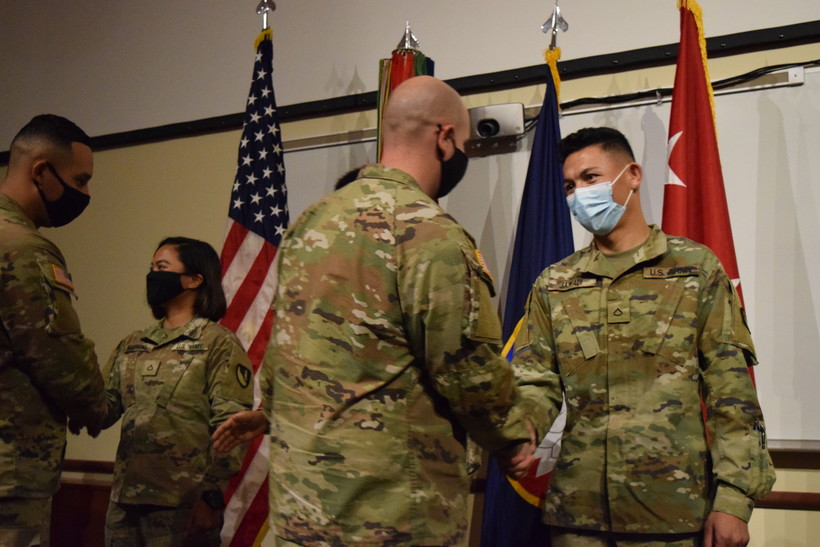 All three soldiers are serving in Operation Allies Welcome, providing support for evacuees from Afghanistan living at Fort McCoy while their immigration and resettlement paperwork is processed.

The work has been special for Jawadi, who fled from Afghanistan at a young age and spent time in Iran, Malaysia and Singapore before resettling in the U.S. 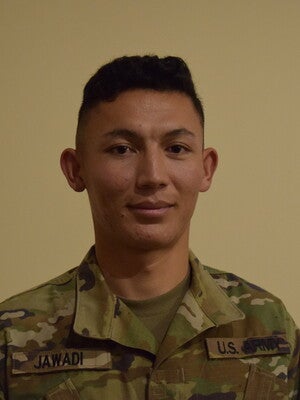 Private First Class Noor Jawadi said pursuit of a brighter future led him to apply for U.S. citizenship. Jawadi and two other soldiers serving at Fort McCoy participated in a naturalization ceremony at the base on Thursday, November 4, 2021. Hope Kirwan/WPR

"I see a lot of kids (at Fort McCoy) and that reminds me of myself. And I can see them having a brighter future, and it makes me happy," Jawadi said.

The pursuit of a brighter future is what Jawadi said led him to apply for U.S. citizenship. He said he was inspired to join the military as a way to give back to the U.S. after he was granted residency.

Jawadi’s been in the Army for just more than a year and is stationed at Fort Bliss in Texas. But he’s been serving at Fort McCoy since the start of Operation Allies Welcome in late August.

"We got a 48-hour notice, and we got here to Wisconsin. And I was just maybe lucky, I was speaking the language (of the evacuees)," Jawadi said. "So I was like ‘Hey, you know what, I can help them out if they need translator or linguist,' which they did."

He spent the first three days helping to translate in Farsi and Dari until military linguists could arrive at the base.

"I was a little rusty, so it was good for me, a little practice," Jawadi said.

Marciano has been primarily working with Afghan women at the base and helping connect them to medical and immigration services. She’s also accompanied some female evacuees to local hospitals for care.

Marciano, who is stationed at Fort Leonard Wood in Missouri, said part of the work has also included telling the evacuees about life in America.

"They do ask, 'How is it outside? How is it living in America?' They know that there are so many opportunities out there for them. And they know there are going to be people helping them transition," Marciano said.

She said she’s enjoyed getting to meet people from a different country and to continue building relationships with the other soldiers in her unit, some of whom were there to see Marciano take her oath of allegiance to the U.S. and officially become a citizen. She’s been in the Army for a year and said the community is one of the biggest reasons why she wanted to join.

"My battle buddies are always there supporting me; (for) example, for this (ceremony)," Marciano said. "Which is really great, I appreciate them."

Marciano said she’s looking forward to more years serving in the Army and is excited for career opportunities that could come with U.S. citizenship.

The naturalization ceremony is the final step in the process to citizenship. New citizens take the oath of allegiance, renouncing their ties to their former country and promising to "support and defend the Constitution and laws of the United States of America."