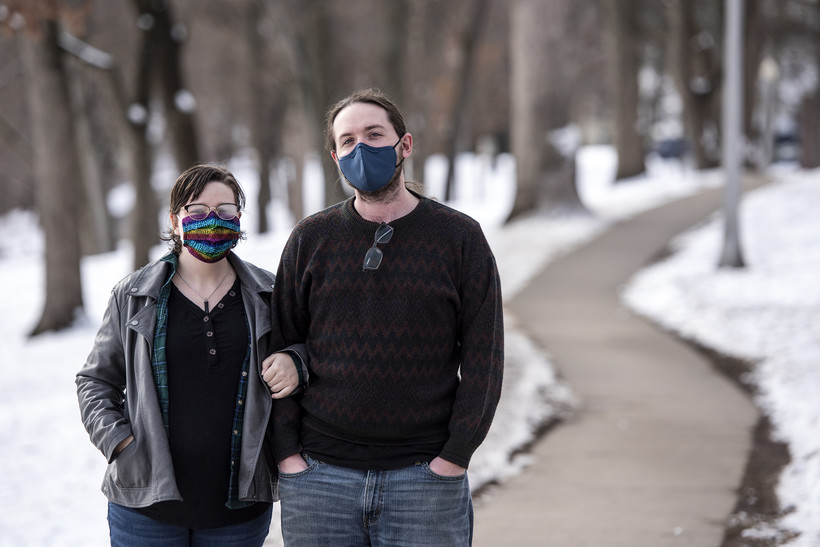 Andrew Seiner, right, stands with his wife, Morganne Seiner, left, on Jan. 9, 2021, at Firemen's Park in Waterloo, Wis. Morgan received a COVID-19 diagnosis on New Year’s Day, prompting the couple to improvise ways to limit Andrew’s exposure while inside of their home. Angela Major/WPR

So You’ve Been Diagnosed With COVID-19. What Next?

Morganne Seiner struggled to decide whether to visit her sister’s family in Marshfield for Christmas. The 29-year-old Waterloo resident is five-months pregnant with her first child, a girl. She knew that traveling could put herself and the baby at risk of exposure to the coronavirus.

On the other hand, Seiner had lived in what she described as "almost complete isolation" with her husband, Andrew, 30, since the pandemic began in March. She craved the visit during a rough year.

The couple and Morganne’s parents are splitting caretaking duties for her grandmother who has Alzheimer's disease — forcing them to sacrifice meaningful time with others to keep her safe. That precludes seeing Andrew’s family members who live only a few blocks away. Among the moments missed: a nephew’s baptism and a niece’s third birthday. Morganne did attend a funeral for another grandparent who died in December. But that was about it.

On Christmas, Morganne decided at the last minute to drive to Marshfield while Andrew stayed home. Her sister reported COVID-19 symptoms days later, prompting Morganne to get tested in Madison. On New Year’s Day she learned the results: positive for COVID-19.

"You can be so careful, and you can just make one mistake," Seiner said. "You can just let your guard down a little bit, and that’s when that’s when it could get you."

Holiday gatherings in December appear to have fueled a surge of coronavirus infections in Wisconsin and across the country, just as public health experts warned they might. The state’s seven-day average of new COVID-19 infections plunged as low as 1,882 on Dec. 26 after peaking at 6,564 in mid-November. But infections after Christmas climbed to 2,915 on Jan. 11 before declining in recent days.

This week marks one year since the United States detected its first COVID-19 infection. The medical community has since learned plenty about the virus — even developing and approving multiple vaccines in record time. The world still lacks a silver bullet for helping COVID-19 patients avoid hospitalization, but experts offer a variety of tips that might help — including one treatment, monoclonal antibodies — that many patients and doctors overlook.

The Seiners intuited many of those practices on their own, and they hope their experience can help others.

Isolate As Best You Can

Surprisingly, Andrew tested negative for the virus. The couple wanted to keep it that way. That meant trying to stay apart within their own home.

Andrew slept on a mid-century modern couch the couple just purchased. It’s handsome and has good back support for sitting, the couple said, but it’s not ideal for sleeping — unlike the massive sectional the couple reluctantly ditched once it started to collapse.

"I’d rather have a sore back for a week than have COVID," he said. 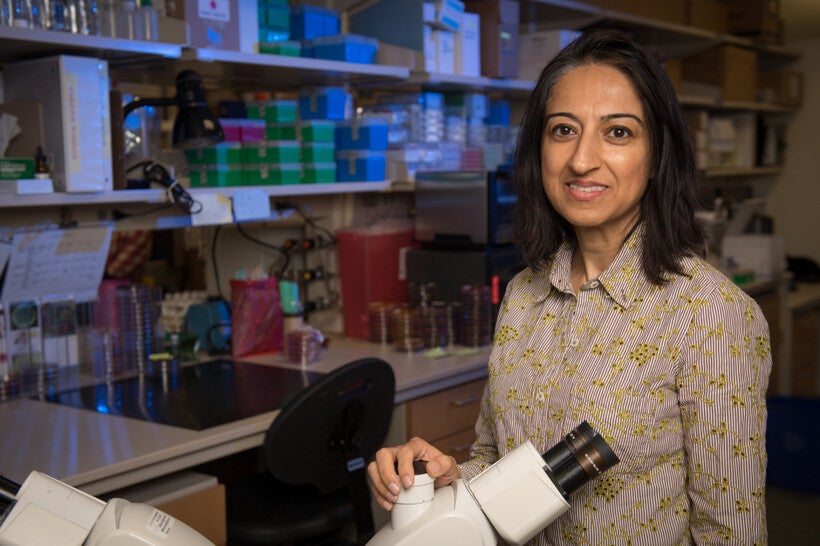 Dr. Nasia Safdar, medical director for infection prevention at UW Hospitals and Clinics in Madison, says breathing exercises can help people with respiratory symptoms from COVID-19. They might try filling their lungs with air a few times daily through intentional, deep breathing. Photo courtesy University of Wisconsin-Madison School of Medicine and Public Health

Wearing masks when around others at home helps, too. Masks contain the sick person’s secretions while protecting others from whatever may have escaped their mouth or nose. Morganne wore her mask — decorated with colorful sequins in a rainbow pattern — whenever she and Andrew occupied the same room.

"We see a fairly high degree of household transmission with COVID," Safdar said, adding that households can bolster safety through general hygiene like hand washing and cleaning high-touch surfaces. Keeping windows open when possible or using an air purifier or fan can help, too.

Those infected should stay isolated for at least 10 days, Safdar said, even if symptoms improve.

A Jefferson County contact tracer asked Andrew to stay isolated until Jan. 22 — two weeks after Morganne was deemed "no longer contagious." Family members helped by dropping off groceries, prescriptions and other necessities.

"We’re in a relatively rural area. We’re very fortunate to have a very strong support network of COVID-negative people that can run scouting missions for us," Andrew said.

Andrew’s brother also dropped off some moving boxes. The couple soon plans to move into a new house, and Andrew figured he might as well pack while stuck at home.

Monitor Symptoms, Get A Thermometer And Pulse Oximeter

Morganne reported mild symptoms that have since subsided: sore throat, congestion and some body aches. She is not sure whether COVID-19 caused her fatigue and brain fog. Perhaps that was from her pregnancy, she said.

She is thankful to have avoided a fever, which could have posed a risk for her unborn baby. The couple checked their temperatures at least once in the morning and once at night — "sometimes in the afternoon if we’re feeling frisky," Morganne joked.

Safdar said even COVID-19 patients who feel fine should keep checking their symptoms and temperatures.

"Intentionally go down the list of symptoms and make sure that you don’t have them — if you’re breathing fine, and there’s no chest pain, there’s no sore throat, no headache," Safdar said.

Serious complications typically surface during the second week of a COVID-19 illness, she added.

Dr. Michael Landrum, an infectious disease physician at Bellin Health in Green Bay, recommended getting a pulse oximeter — a small device that can be placed on a fingertip to measure a pulse and blood oxygen levels. They generally cost around $30 at a pharmacy or online. 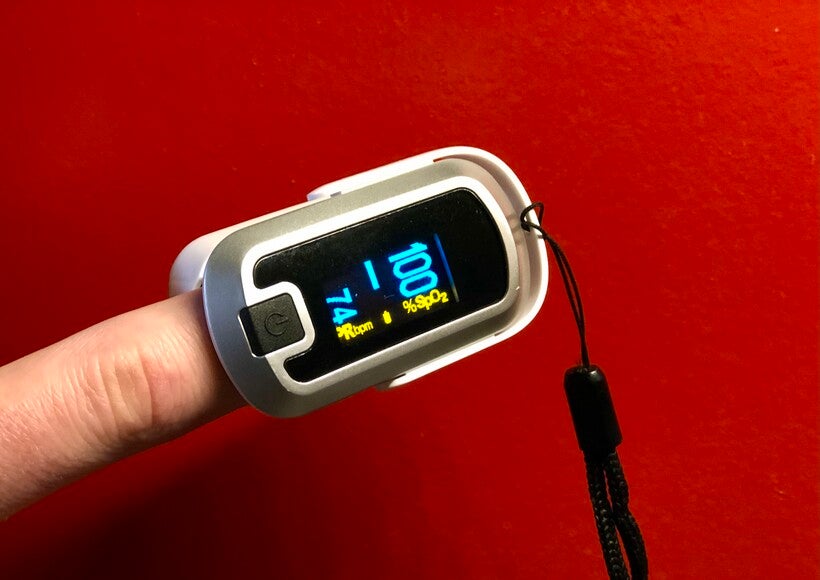 A pulse oximeter shows a blood oxygen level of 100 percent and a pulse of 74 beats per minute. Lower oxygen levels could signal that a COVID-19 infection is worsening. Healthy people typically have blood oxygen levels around 98% or 99%, says Dr. Michael Landrum, an infectious disease physician at Bellin Health in Green Bay, Wis. Patients who take several slow, deep breaths and still register a blood oxygen at or below 94% should call their doctor or seek care at a clinic, Landrum says. Jim Malewitz/Wisconsin Watch

Less oxygen in blood is "one of the prime warning signs that things could be getting worse," Landrum said.

Healthy people typically have a blood oxygen level around 98 percent or 99 percent, Landrum said, adding: If a patient takes several slow, deep breaths and still registers a blood oxygen at or below 94 percent, "that should be a sign to at least call your doctor."

A pulse oximeter can help detect that early. One caveat: Research shows the devices sometimes give artificially high readings to people with darker skin. Patients should still pay attention to breathing troubles or downward-trending oxygen levels — even if the readings hover around generally acceptable levels, experts say.

With her relatively mild symptoms, Morganne didn’t seek treatment other than a bottle of Sinex saline nasal spray that she hid to prevent Andrew from using it by accident.

She tries to eat healthily, takes her prenatal vitamin and stays hydrated.

The extra water "is not helping with the pregnant thing, because now I have to pee like every three minutes instead of every five," she said.

Old adages about what to do when you are sick — like drinking fluids and getting plenty of rest — ring true for COVID-19. Some other purported remedies are more dubious. That includes hydroxychloroquine; President Donald Trump hyped the drug, but a range of studies have found it unlikely to help patients. Research has yet to prove the effectiveness of zinc and vitamin C, Landrum said, but neither is risky to try, particularly in the short term.

But the vitamin D in Seiner’s prenatal supplements may help. People with vitamin D deficiencies may face higher risks of contracting COVID-19 and developing more severe complications. Wisconsinites tend to have lower vitamin D levels from staying indoors during the winter, so a 2,000-unit daily supplement could help until spring’s sunshine arrives, Landrum said. Patients should aim to bring vitamin D levels up to normal rather than taking too much of the supplement.

And for COVID-19 patients who develop a fever? They should take fever reducers such as ibuprofen or acetaminophen (Tylenol). Those also address muscle aches. Tylenol typically triggers fewer side effects, Safdar said, but either drug helps for COVID-19.

Breathing exercises can help people with respiratory symptoms, Safdar added. They might try filling their lungs with air a few times daily through intentional, deep breathing.

The Seiners did not know about one option for treating COVID-19: monoclonal antibodies. Few people know to ask their doctors for the drugs, frustrating federal officials who hoped for a rapid rollout after the federal government approved them for emergency use in November.

Eli Lilly makes one type of monoclonal antibody product, and Regeneron makes another — the type Trump took in October before it was approved for widespread use. Landrum said both products work similarly. COVID-19 patients receive them through an IV infusion to jump-start the body’s immune response.

Safdar recommended checking with a doctor about qualifying for the antibodies. Doing so sooner is better, because the treatment doesn’t work after the disease becomes too severe.

"Not everyone needs them. But if you have high-risk conditions, it’s good to at least discuss the possibility," Safdar said.

Seiner feels guilty about contracting COVID-19, even as Andrew reminds her that he encouraged her to take the trip.

"I’m doing OK," Morganne said. "But this is risking my husband’s life … my parent’s lives, my grandma’s life, my unborn child’s life — all are at risk because I went to go see my sister for Christmas."

The self-blame comes as Morganne mourns one grandparent, prepares another to enter a nursing home that bars visitors and worries about Andrew, who was hospitalized with a heart scare in December. All of that on top of the isolation and challenges of pregnancy.

The Seiners are thankful Morganne’s symptoms weren’t worse. They look forward to turning their attention to the more exciting — and terrifying — task of raising their daughter.