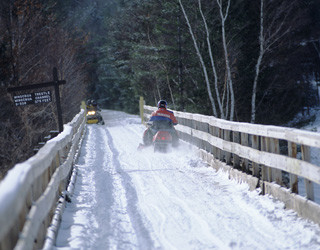 Snowmobilers Getting The Bug After Winter Storms

A couple of winter storms this month is giving snowmobilers an itch they haven't been able to scratch for a few years. After several bad snow years, this winter holds a lot of promise.

"We kind of have snow a little bit all over," he says. "Everybody's starting to get the bug this year to get going. I talked to some of the dealers on sales. It sounds real good, a lot of used machines going, a lot of new ones."

At Lakewoods Resort near Cable in Bayfield County, Marketing Director Heidi Overman says reservations are up this year.

"Anytime there's snow in the forecast our phones are ringing off the hook," she says. "In the past years when there is no snow, not as many people are willing to make those reservations."

"When I looked out the window and saw that lovely white stuff coming down, it was very gratifying to see that because I know so many people who rely on the business it brings in and it's a great recreational sport," she says.

Conklin says the last few winters have been more mud than snow.

"We're doing a lot better than we did last year when we had some counties that only opened up for two or three days. I'm in Barron County and they were open one weekend."

People can go online to the Department of Tourism for a county-by-county listing of open snowmobile trails. Conklin says many snowmobile clubs are already grooming trails.