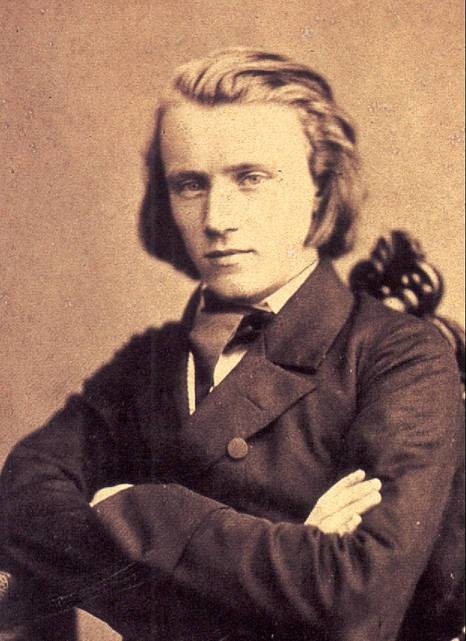 Although he wrote a sublime German Requiem, Johannes Brahms knew all about the earthly–and earthy--side of music.

Brahms grew up in Hamburg in the 1840s in a family so poor that he had to go to work at the age of thirteen. Because he had remarkable talent, young Brahms had no trouble finding jobs playing the piano in local taverns and restaurants, and he soon became so popular that proprietors would call him away from home at all hours to play at dances for free drinks and a little money.

His mother, who also had gone to work at the age of thirteen, believed that honest work was healthy as long as the home environment was wholesome, and she suggested that as long as young Brahms kept in good health and stayed morally straight, he would get through that difficult time in his life.

But Brahms was wearing out. He was being pulled in two different directions–toward the career of a virtuoso under the guidance of Hamburg composer Edward Marxsen on the one hand–and, on the other, by the need to make fast money playing dance music in smoke-filled night spots. Brahms later recalled that his two-sided life made him so anemic and nervous that he could walk along an avenue only by “staggering from tree to tree.”

In 1847, when Brahms was fourteen, his luck changed. His father made the acquaintance of Adolf Giesemann, the owner of a paper mill in the village of Winsen on the Luhe, who invited the boy to spend the summer with him in order to give piano lessons to his daughter Lieschen. The experience was so redeeming that forty years later, when Lieschen asked Brahms to help obtain a music scholarship for her daughter, Brahms offered to pay the girl’s tuition himself.