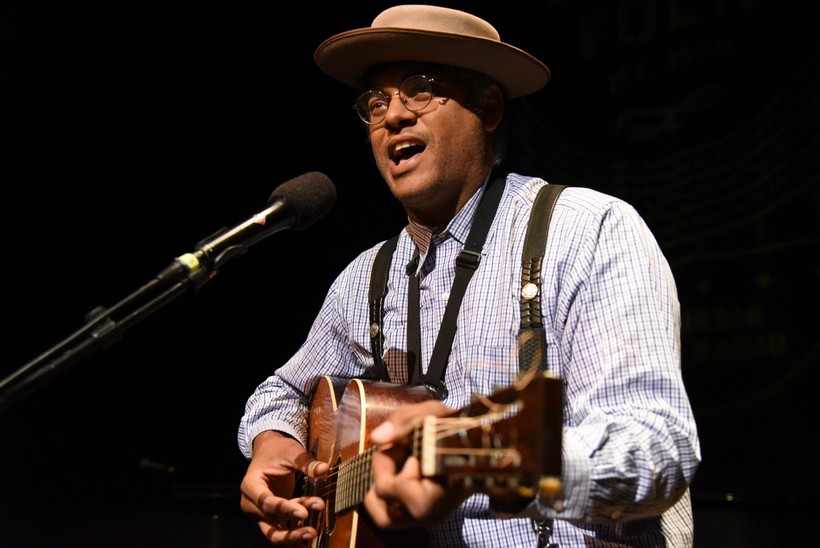 "Simply Folk" hosted its 40th Anniversary Shindig recently, and as one attendee described it, "It was wonderful! Loved all the musicians!"

Almost 700 people gathered on June 7 at Shannon Hall on the campus of the University of Wisconsin-Madison to celebrate four decades of "Simply Folk" with a concert by three fantastic performers.

Cris Plata and his band Extra Hot opened up the evening. His set included songs with influences ranging from Texas ballads to folk to Mexican polka, conjunto and ranchera music, or as Plata likes to call it, "Mexican roots." It was a great way to start the evening, with high energy music from a Madison, Wisconsin band.

Grammy-nominee Mary Gauthier performed next, and she was joined on stage by Jaimee Harris on guitar and vocals and Michele Gazich on violin. Along with classic songs from her catalog, like "Mercy Now," Gauthier also performed cuts from her latest album, "Rifles and Rosary Beads." She shared the story of how the album came about, working with veterans on songwriting as a way to process their experiences and to heal. The powerful songs she shared during the event showed why the album received a nomination for the 2019 folk album of the year Grammy award.

Speaking of nominees for folk album of the year, Dom Flemons was the shindig's final performer. His album, "Black Cowboys," was also a 2019 Grammy nominee, and he played some of the songs from that disc during his set. Introduced by former "Simply Folk" host Stephanie Elkins, Flemons sang and played the guitar, banjo, harmonica, rhythm bones and a host of other instruments on stage, showing an amazing versatility as a musician. He calls himself "the American Songster," as part of the tradition of African-American songsters who traveled and performed starting soon after the end of the Civil War. Along with his music, Flemons shared the history of the songs, making for an interesting and very enjoyable set.

Wrapped around all that music were appearances by past "Simply Folk" hosts Judy Rose, Becca Pulliam and Elkins, along with current hosts Dan Robinson, Sile Shigley and Jeff Durkee. Memories of 40 years of music flowed during the evening, as well as gratitude to all the engineers and staff of WPR for their work in creating the show. But the greatest thanks went to the "Simply Folk" listeners, whether they were present or not. The show would not be possible without their support.

But after 40 years, the thing that remains is the music, both at the shindig and on "Simply Folk." You can listen to Flemons' performance on the link with this article, and we’ll be sharing the other performances both on "Simply Folk" as well as here online in the coming weeks. We hope you enjoy this music as much as we did!