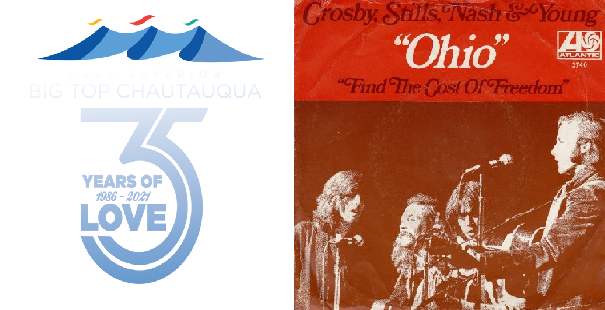 WPR’s “Spectrum West” host Al Ross will talk about exciting events planned for the 2021 season of Big Top Chautauqua with two guests from the Bayfield venue this week on “Simply Superior” at 10 a.m. on Friday, July 16.

General Manager Kristen Walczak of Big Top Chautauqua visits with Ross along with Ed Willett, writer and performer of Dear Earth: A Love Song/Letter of Hope, one of the performances taking place this August. This season is the tent’s 35th and is being called 35 Years of Love. A Wisconsin Public Radio sponsored event Anishinaabe Dibaajimowin: An Ojibwe Story, to be performed on July 30-31, will also be highlighted by Walczak.

Also on this week's Show, “Simply Superior” presents an encore airing of the documentary special: "Hear the Drumming: The music of the Kent State and Jackson State tragedies" The documentary, hosted and produced by Simply Superior's Robin Washington, recounts the events of May 4, 1970, when the Ohio National Guard fired into a crowd of Vietnam War protesters at Kent State University, killing four. The tragedy shocked the nation and inspired Neil Young to write "Ohio," released by Crosby, Stills, Nash and Young, transforming them from a harmonic love-song trio to a politically charged protest act.