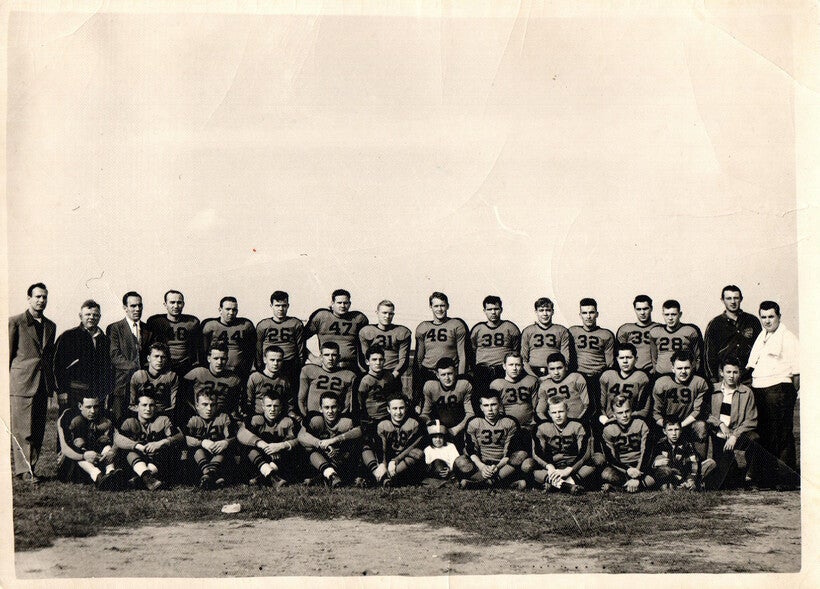 25 Miles From Green Bay, The Little Chute Flying Dutchmen Took The Field From 1920 To 1950
By Jenny Peek
Share:

Go to any small town in Wisconsin and you’re likely to find Main Street — adorned with shops, restaurants and a couple bars. But in Little Chute, there’s something more. An authentic, fully-functioning Dutch windmill. Towering over 100 feet, the structure was built in the Netherlands, disassembled and shipped to Little Chute, where it still stands.

It’s a point of pride for the community — something wholly unique.

The northeastern village, some 25 miles from Green Bay, is known for its Dutch heritage. A lesser known fact about Little Chute is that it was once home to a semi-pro football team, the Little Chute Flying Dutchmen, that played for three decades straight. 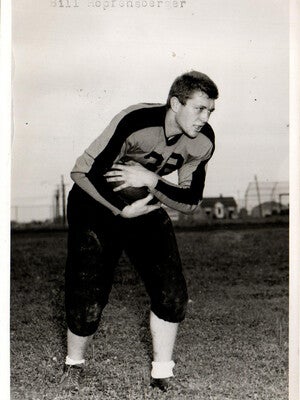 Bill Hopfensberger, No. 43, played for the Little Chute Flying Dutchmen in 1949 and 1950. Photo courtesy of Gene Janssen

Little Chute resident Gene Janssen, 81, wrote to WHYsconsin about the Flying Dutchmen. He remembered the team from his youth and hoped to learn more about its history. With his help, we hit the archives to learn more.

By Janssen’s earliest account, the Little Chute Flying Dutchmen got their start in 1920. Over the years, they played a variety of other semi-pro football teams across central and northeast Wisconsin. And while the Flying Dutchmen were able to field a team for 30 years, most teams came and went.

"After the war there (were) other teams that had to not have a team because the war took a lot of their players away. Fortunately, in Little Chute, we were able to keep going because of St. John's High School," Janssen, who volunteers at the Little Chute Historical Society, said.

As football players from St. John’s graduated high school, they often went on to play for the Flying Dutchmen. The high school and semi-pro teams even played on the same field.

Janssen was able to find dozens of programs listing the teams the Dutchmen played as well as the full rosters. In 1938, the Flying Dutchmen played against such teams as the Manitowoc Gales, the Two Rivers Ramblers and the Merril Foxes. Years later, their opponents included the New London Edisons, the Clintonville Four Wheel Drive Truckers and the Appleton Reds. 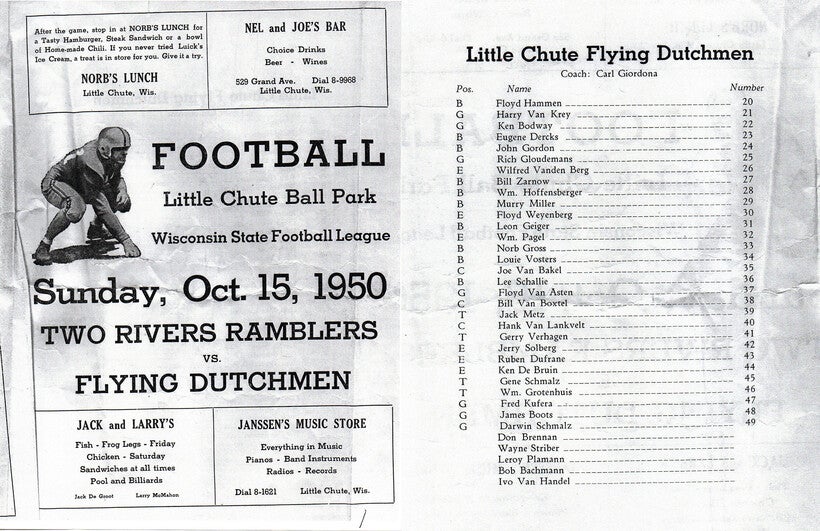 A program from a Oct. 15, 1950 game between the Little Chute Flying Dutchmen and the Two Rivers Ramblers. Photo courtesy of Gene Janssen

But the Dutchmen didn’t just play semi-pro teams. Legend — and history — has it that they also played the Green Bay Packers on more than one account.

"The Little Chute football team has already organized and is ready to meet any and all comers ... They have strengthened considerably and there is one thing for sure that if they smash up against the Little Chute lineup, they are smashing against a stone wall," a Sept. 23, 1920 article in the Kaukauna Times read. "Manager Joseph Lenz is working his men hard and is getting them ready for the Green Bay Packers, which team they will play October 2 at that city,"

After some digging, Janssen was able to learn the oucome of that 1920 match up.

"By talking to some of the guys I heard it was 52 to nothing that Little Chute got whomped," he said. "However, when you read more, it shows where one of the teams actually beat the Packers. I think it was (in) 1935, you know, like an exhibition game or something like that ... They’re the only one of a semi-pro team that ever beat the Packers."

Most of the games the Flying Dutchmen played were for benefits, Janssen said — oftentimes raising money for area organizations, or collecting funds to build things like a new hospital. Janssen, who remembers seeing a few games himself in the late 1940s, said it was a community affair. 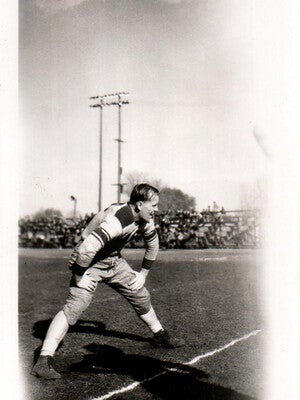 Herb Eggert, No. 6, poses for a photo on the Little Chute Flying Dutchmen's field in 1950. Photo courtesy of Gene Janssen

While many people from Little Chute attended each home game, attendance swelled for matches against nearby teams, such as Kaukauna and Appleton, because people from neighboring towns would also come watch, Janssen recalled.

"(There were) crowds like sometimes 3,000 people at the game, because, you know, years ago, there was no television ... everybody went to a game ... the bleachers were full and it was amazing how people followed everything," he said.

The high school team — St. John’s — often played on the same day as the Flying Dutchmen. Whoever played first was in charge of setting up the field, Janssen recalled.

"(Whichever) team had the first game had to line up that whole field ... It was a big, all-morning job to mark that field. I used to do that myself years ago," he said. "All the yard markers had to be 17-and-a-half inches in from the sidelines. You know, it took a long time because you had 50 yards one way and 50 yards going the other way."

Janssen also remembers seeing all the neighborhood kids lined up against the fence to catch a glimpse of the game — sometimes they got lucky and someone paid their 15 cents to get it.

"All of a sudden, here would come Father Van De Loo, our priest at St. John's, and he paid for all of the kids, so they all got in free ... that was always pretty neat to me," Janssen said.

Tony Koehn, the nephew of three Flying Dutchmen players, wrote about watching the games as a 10-year-old boy. Giving a play-by-play, he describes the action:

"One game in 1947, I especially recall as three of my uncles were playing for the team. Roger Koehn was playing the quarterback, Jim Koehn was the running back, and Clyde Koehn was the wide receiver.

What made the game so exciting was the trick play they used for a touchdown. It started when Roger was under center, Jim was running to the sideline limping noticeably. Roger seemed to back out from under (c)enter waiting for Jim to limp to the sideline.

Then Roger went back under center, hiked the ball and threw a sideline pass to Jim who now seemed to be running just fine. Jim scurried down the sideline for a 60-yard touchdown. I am not sure if rules would allow this to occur today, but at the time it looked great."

And like any good Wisconsin football game, Janssen said fans of the Little Chute Flying Dutchmen even tailgated like the Cheeseheads of today.

"Where did some of the crowd go at halftime ... Well, here they are going across the road about a block away, and this guy had a garage and he had beer in that garage with coolers. And those guys would go over to get a can of beer," Janssen said with a laugh. "He had his whole garage lined up with all different kinds of beer cans, different brands, I think that's how he got his collection." 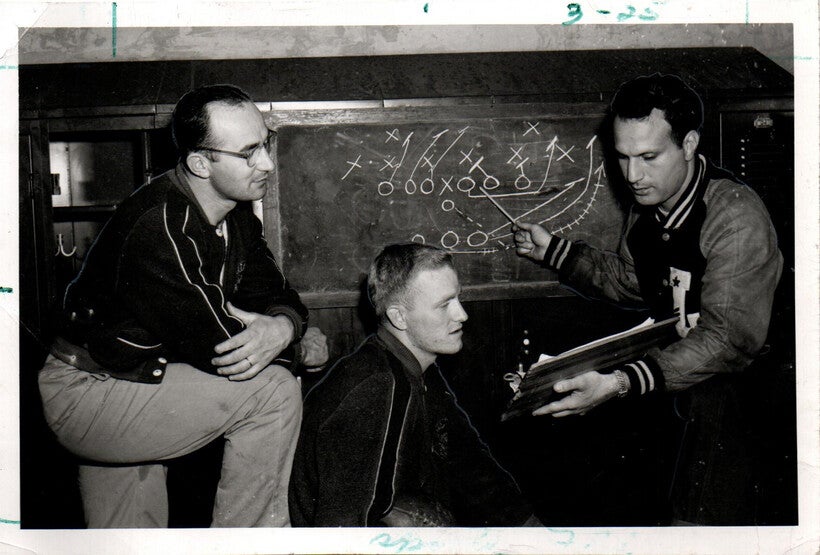 Coach of the Little Chute Flying Dutchmen, Carl Giordona, left, goes over plays with his assistant coach and player Hank Van Lankvelt, right, during the 1950 season. The name and role of the middle person is unknown. Photo courtesy of Gene Janssen

The Little Chute Flying Dutchmen disbanded in 1950. Jim Bongers, now 91, played toward the end of their reign.

He said each player had to drive to the games in their own cars — there was no team transportation — and no one got paid. But he looks back on his time with the Dutchmen fondly.

"We had a fairly decent team, and we won our share of games and we lost some," he said. "Football always drew a lot of fans here. We played in Kaukauna, and we played in Merrill and different places like that. I always enjoyed it." 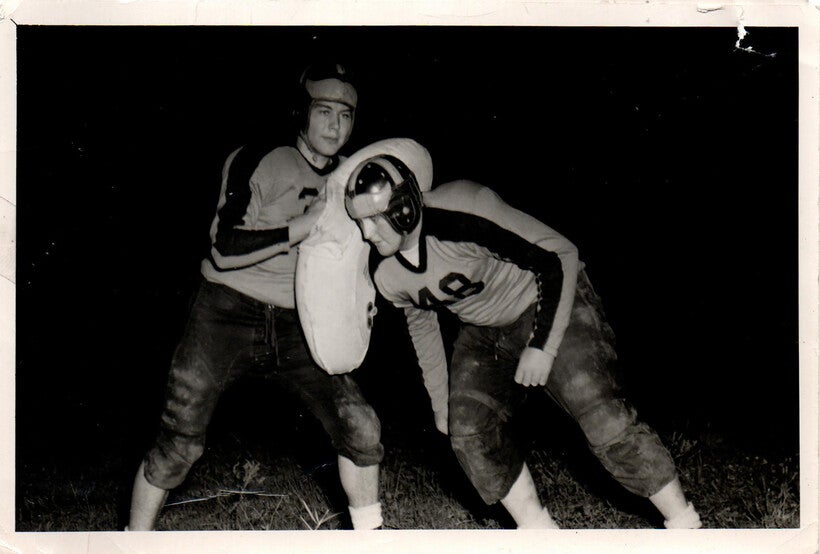 But like many of his teammates, Bongers had to eventually say goodbye to football.

"In ’50, I got married. Well, then football was over with for me," Bongers said. "I couldn’t take a chance on getting hurt after I got married ... I really enjoyed playing football, but it’s just after you get married, you don’t play that no more."

From talking to past players and family members of people who played, the sentiment was the same: once players got married, their football careers ended. Without a good insurance package, the risk of getting hurt was just too high.

Now, with few surviving Flying Dutchmen players left, Janssen hopes to preserve the history of the team he and so many other Little Chute residents were proud to be a part of.

By word of mouth, he’s collected stacks of photographs, programs and newspaper articles that showcase the team’s players and games — currently taking up residence in piles around his basement. As the coronavirus pandemic eases up, he hopes to present what he’s learned to the Little Chute Historical Society, bringing more awareness to one of the many things that make Little Chute special.

"I love helping people and ... this is history that people should know," Janssen said. 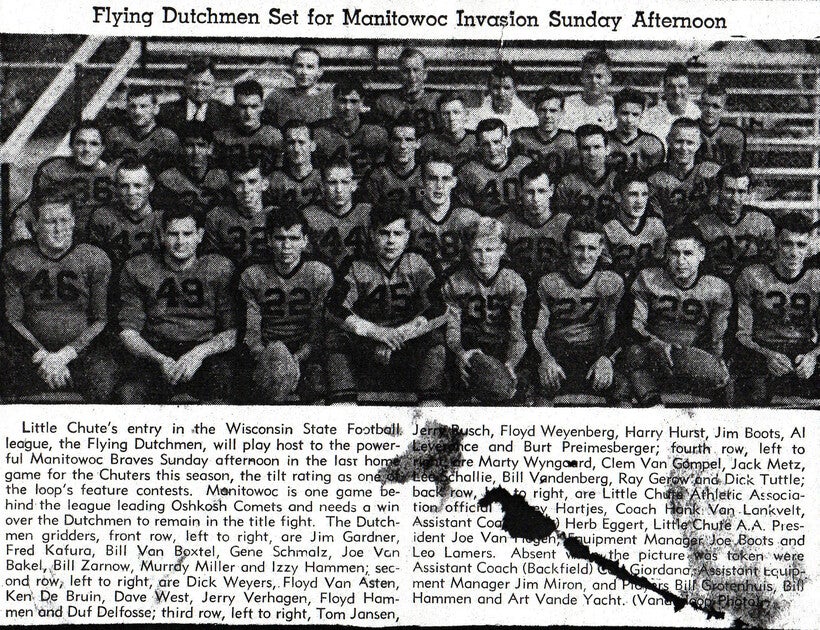 A newspaper article showing the Little Chute Flying Dutchmen before playing the Manitowoc Braves in 1949. Photo courtesy of Gene Janssen

This story came from a question as part of the WHYsconsin project. Submit your question at wpr.org/WHYsconsin and we might answer it in a future story.