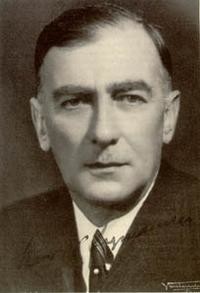 During his first sojourn in America, composer Karel Szymanowski had accomplished little more than strengthening his identity as a Polish composer. Nonetheless, in 1921 a friend convinced him that a second visit would be more productive since new contacts there might lead to important performances of Szymanowski’s music.

Still jaded from his previous visit, Szymanowski was more inclined to listen to a friend who said that in America he might at least earn enough fame and money to allow him to compose without worrying about his income. Another friend, one more given to bluntness, advised Szymanowski to go over and marry a rich American.

Soon after his arrival in New York at the end of September, Szymanowski did tap a vein or two. He secured a clothing manufacturer as a benefactor and got backing from the daughter of the man who had bankrolled the New England Conservatory and the Boston Opera. Szymanowski rounded up enough money to support his mother for a year.

But, for the most part, the Americans were tight with their dollars because the economic indicators were pointing to a recession.

And the prospecting required such intense socializing that Szymanowski had little time and energy left for more creative pursuits. “It really is a kind of inferno,” he wrote to his mother, “in which for entire days it’s often impossible to collect one’s wits for a single moment!”

Grudgingly, he attended concerts or parts of concerts that involved acquaintances, most of which made him all the more restless to get on with his own work.

Drawing on lessons learned from his first American experience, Szymanowski, made a policy of leaving New York only for the Boston performances of his Second Symphony. From time to time, he worked on his opera King Roger, but the only work he completed was a set of three short lullabies.

After five months, Szymanowski went back to Europe, less than enthusiastic about his second American expedition.