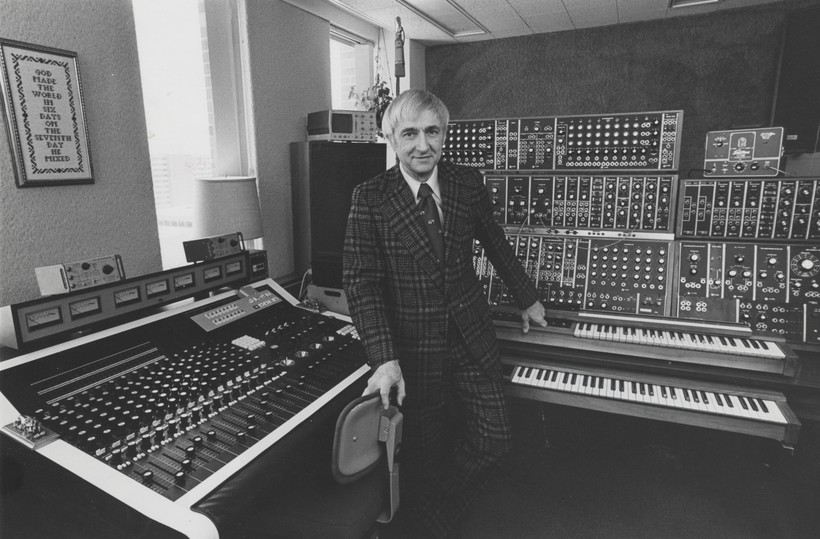 Don Voegeli stands in front of mixers. Voegeli was the composer of the theme that "All Things Considered" has used since the show debuted in 1971. Photo courtesy of UW-Madison Archives

The Search For The Synthesizers Behind The 'All Things Considered' Theme

As a public radio listener, you’re probably familiar with the theme song for NPR’s "All Things Considered." It’s had a few variations over the decades.

But did you know it was originally composed in Madison in 1971?

It was written by Don Voegeli, a University of Wisconsin-Madison professor and the longtime music director at WHA (now known as Wisconsin Public Radio).

"He produced lots of music over nearly five decades," said Voegeli’s son, Jim Voegeli, who helped create the Don Voegeli compilation CD "Beautiful and Lovely" and works to share his father’s history and legacy. "Going back, he played the organ interstitial in (WHA’s) Studio A, he played piano, and they got small ensembles to play for 'College of the Air' and 'School of the Air,' some of which were nationally distributed." 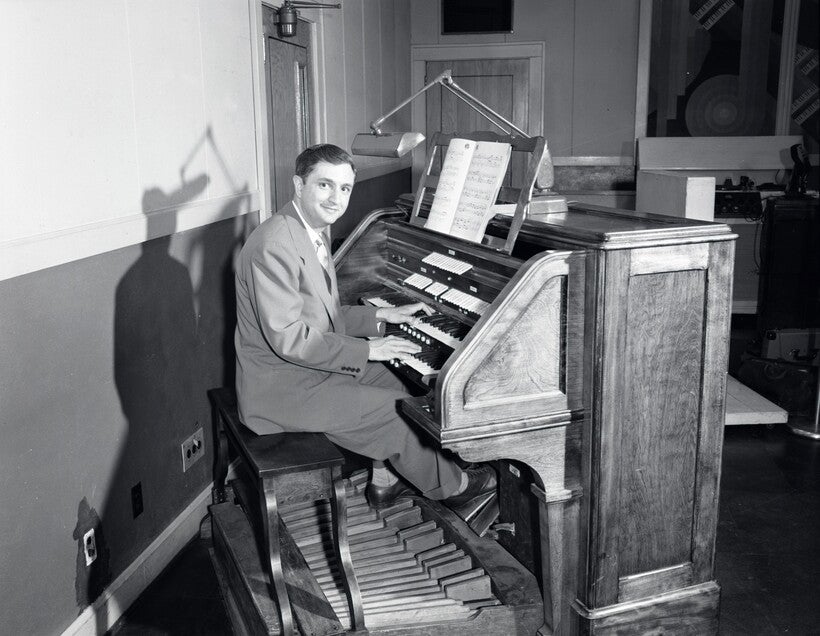 Composer Don Voegeli poses for a picture at a small organ in the WHA studio. Photo courtesy of UW-Madison Archives

Voegeli also composed music for commercials and television, while playing music with friends on the side.

That experience influenced his colleagues to tap Voegeli to write the theme song for NPR’s first daily news program: "All Things Considered."

"You know, there was no great direction of, 'We need this in a certain fashion.' It was more, 'Do a theme for us that will identify the program,'" Voegeli told NPR in 2002. "In the second theme, they wanted a radio signal sound in the intro. That was the one prerequisite."

In the 1970s, he composed a lot of music in his "electrosonic studio" office at UW-Madison. His instruments of choice at the time? Synthesizers and electronic gear, like the Moog, Putney and Fender Rhodes piano.

But what made him make the switch?

"Commercially available synthesizers were relatively new," Jim Voegeli said. "It was kind of the cutting edge sound of its time."

"I guess it just seemed like a natural thing to give it a new sound with electronic music," Voegeli said on NPR.

And while this new technology took time for some listeners to get used to, Voegeli continued to crank out a ton of music through the National Center for Audio Experimentation. This was unique for the time, especially since he was providing the music free to radio stations across the country.

Nigel O’Shea, a technical director and network operator at WPR, said Voegeli did this to serve the public and help carry out public broadcasting’s mission. Plus, it helped keep music production costs affordable.

"He was trying to make music in-house without hiring a bunch of musicians and setting up recording sessions," O’Shea said. "Low production (radio) shows would use organs for their fill music. They would have an organ player. Whereas, the higher production shows had a full orchestra or something like that. So, the compactness of Don's studio is a cost-cutting measure."

Where Did The Synthesizers Go?

There’s a photo of Voegeli hanging up in WPR’s hallway. He’s dressed in a dapper plaid jacket, standing in front of a bank of synthesizers.

O’Shea passes that photo nearly every day. He’s thought a lot about Voegeli and more specifically, the synthesizers in the photo. "Since I started working here I’ve always wondered, 'Where did those go?'" O’Shea said.

These synthesizers helped create some of the most iconic sounds and fill music in public radio. But to O’Shea, who still uses Voegeli’s music on programs like WPR’s "Old Time Radio Drama," the gear represents something more than just instruments.

"He had this self-contained music factory like right here in our building to do all of our interstitials and our music beds. It’s on a different level now, since everything’s on the computer," O’Shea said.

And while these synthesizers that are incredibly important in the history of public radio, music and Wisconsin, no one knows where they are.

So WPR's "WHYsconsin" went on a hunt to track them down. Spoiler alert: it wasn't easy.

After Voegeli retired in 1982, WHA auctioned his equipment off. There are no records of his instruments anywhere. Our only lead was that we were looking for a Putney, a Moog and probably a few other synthesizers.

Hidden treasure No. 1: the Putney synthesizer.

The Putney is the nickname given to Electronic Music Studio’s VCS 3. It was created in 1969 and had all sorts of knobs and a joystick. The portable rig was beloved by many progressive rock bands and was used — perhaps most famously in pop culture — on songs like "On the Run" by Pink Floyd and "Won’t Get Fooled Again" by The Who.

Like other greats, Voegeli composed NPR’s first "All Things Considered" theme on the Putney. 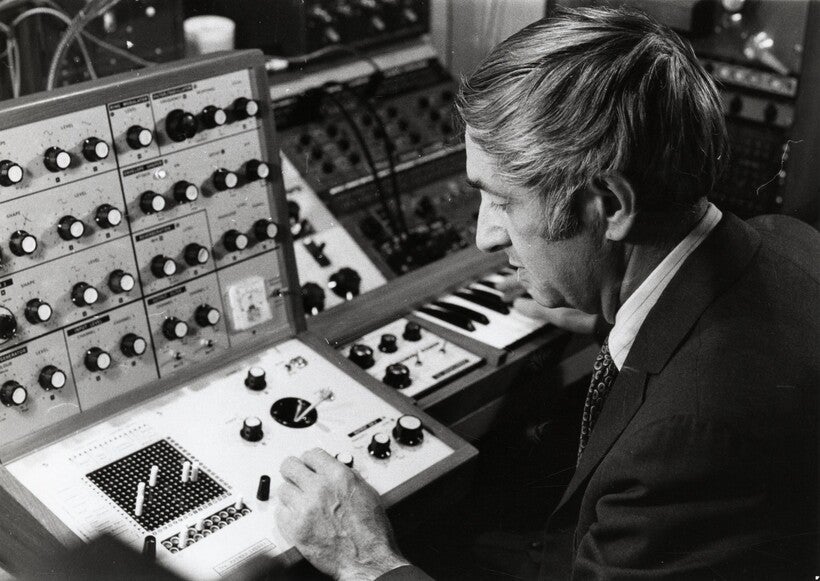 There was a rumor that Voegeli's synthesizer had been purchased by someone in Madison. But when we went to find it and talk with the alleged purchasers, we hit a dead end.

Hidden treasure No. 2: the Moog.

The Moog synthesizer was unveiled in 1964. One of its most famous early appearances was on The Beatles' "Abbey Road" album on songs like "Maxwell’s Silver Hammer," "I Want You (She’s So Heavy)" and "Here Comes the Sun." 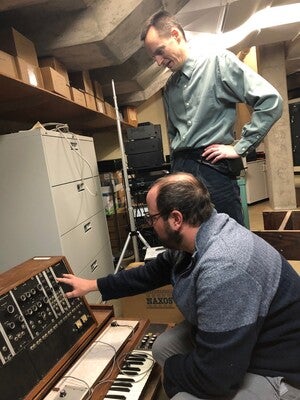 We got a tip that Voegeli’s Moog went to UW-Madison's Mead Witter School of Music.

Brian Heller, facilities director at the School of Music, led us to a Moog that had been sitting in storage for many years. As he pulled the Moog away from the wall, we closely examined the rig. A sticker on the back had the date March 27, 1968, listed, meaning it's one of the first Moog synthesizers.

Upon closer examination, we discovered this synthesizer looked different than the one in Voegeli’s photos. It wasn’t Voegeli’s Moog. It was a different synthesizer purchased by the university in the '60s. Strike two.

While this wasn't Voegeli’s Moog, we did learn that this one will soon be coming out of storage, hooked back up in the Electro-Acoustic Research Space for students to use this spring. 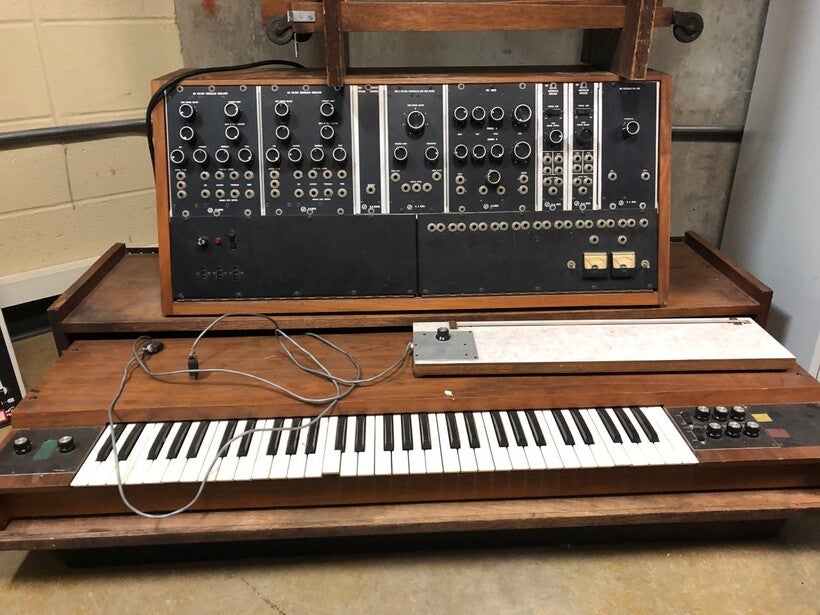 The 1968 Moog synthesizer in storage at UW-Madison's Mead Witter School of Music was likely not owned by Voegeli. Maureen McCollum//WPR

After hitting two dead ends, we weren't sure we'd ever find a Voegeli synthesizer. But then we revisited the auction in which Voegeli’s synthesizers were sold off after he retired from WHA.

Tom Naunas, who started working at WHA-TV (now PBS Wisconsin) in 1976 as a music composer and sound designer, was there at the time of the 1982 auction.

Naunas placed a bid on a few synthesizers and ended up winning two for a total of $300.

He won an ARP Quadra and the monophonic ARP Solost.

Today, the now-retired Naunas keeps the synths in his electronic music studio in the basement of his home. Owning Voegeli’s synthesizers means a lot. He still says Voegeli paved the way for him to have a meaningful career in public broadcasting.

"I’m indebted to him," Naunas said. 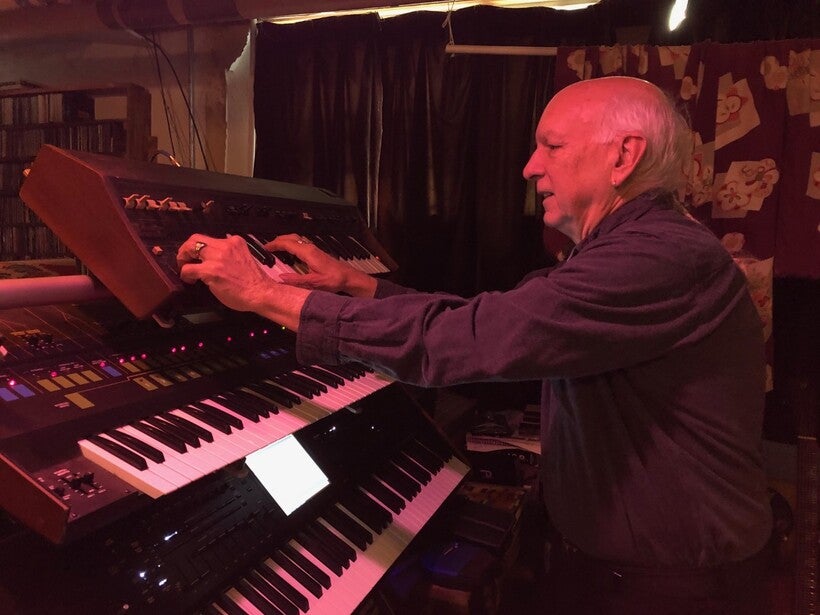 But Voegeli did more than impact one person’s career. The songs he created help set the tone of public media across the country. Jim Voegeli said his father left an upbeat and positive legacy.

"Most of his music is that way, although some is very serious," Jim Voegeli said. "I think he really wanted to help public broadcasting at a time when it was strapped and help it get off the ground with music that it could use in the future."

For O’Shea, he’d like to see more stations create positions for the future Don Voegelis of the world. A lot of the music heard on public radio isn’t made in-house anymore, he said, but with the rise in podcasting, there has been a resurgence. Even WPR is again encouraging staff to create original music, most recently with Karl Christenson’s work on "Derailed."

"I hope in the radio community we can get back to that DIY or self-made model," O’Shea said. "We’re not looking for canned and already produced stuff but making the music ourselves."

Voegeli passed away in 2009. He would have turned 100 years old this month.

So for any synthesizer or Voegeli fans out there who know where his synthesizers went, let us know, so we can solve this musical mystery.