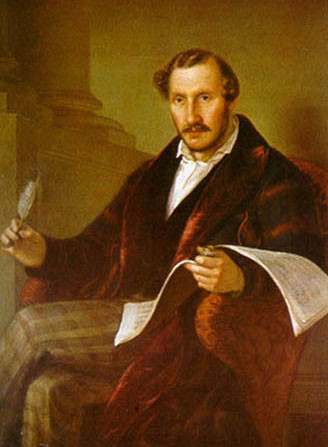 The 38-year-old composer was gambling that his new opera would succeed where others were failing. Gaetano Donizetti was pinning his hopes on a hastily written opera based not on an Italian subject but on a Scottish novel.

By 1835 Donizetti believed that the state of opera in Naples was in a shambles. Rossini had retired. Bellini was dead. "Our theaters go from bad to worse," he said. "The operas fail, the public hisses, the attendance is poor. The crisis is at hand. The public has indigestion, the theater society is about to be dissolved, Vesuvius is smoking, and the eruption is near." He may have been referring to an opera he had based on by Sir Walter Scott's 1819 novel The Bride of Lammermoor. Donizetti completed his opera Lucia di Lammermoor in just six weeks. The story was one of love and treachery, forced marriage and madness..Naples audiences loved it.

Three days after its premiere Donizetti wrote to a friend, "It pleased and pleased a good deal if I am to believe the applause and compliments I received. I was called out many times, the singers even more often. On the second evening the king's brother was there and said the most flattering things to me. Every piece was listened to with religious silence and honored with spontaneous vivas."

The influence of Lucia di Lammermoor went beyond music and back into literature. In 1857 in Gustave Flaubert's novel Madame Bovary, Emma Bovary attends a performance of Lucia with her lover Leon, and in the scene of the lovers' farewell, she feels in the music her own love being reborn. Twenty years later, in Leo Tolstoy's novel Anna Karenina, the opera is the backdrop for Anna Karenina's defiance of social rules when she goes to a performance of Lucia di Lammermoor in search of her lover Vronsky.

On the stage and in great novels Donizetti's opera became a symbol of ill-fated love destroyed by social conventions.