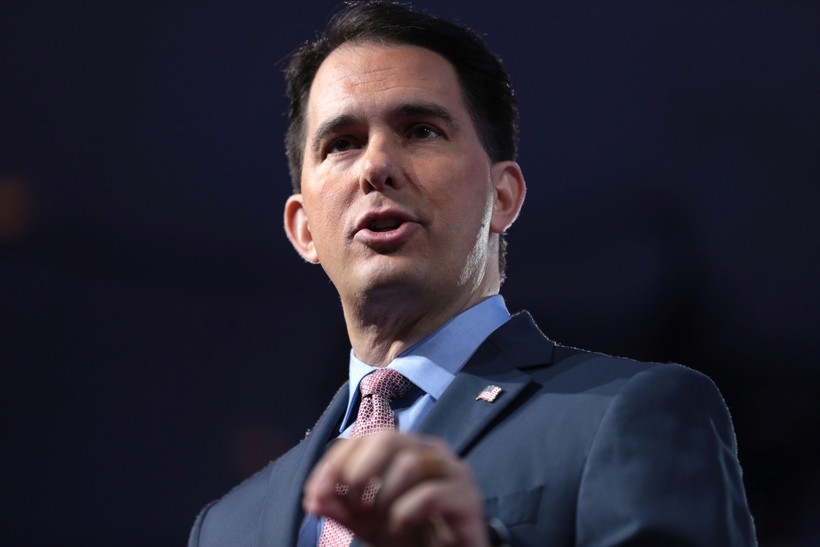 Scott Walker: Rebecca Kleefisch Would Make 'A Hell Of A Great Governor'

Former Wisconsin Gov. Scott Walker says Rebecca Kleefisch, who served as his lieutenant governor for eight years, should consider a run for governor in 2022.

Kleefisch, who was just named "jobs ambassador" for Associated Builders and Contractors, could not immediately be reached for comment. Daniel Suhr, who served as Kleefisch's chief of staff for five years, said it's encouraging to have someone she worked with so closely recommend her for a job he once held.

As for his own future, Walker called being governor the best job in politics in the world, and that because he's 22 years younger than President Donald Trump, time isn't a barrier.

"I would not rule anything out," Walker said. "Ultimately it goes back to what’s happening."

Walker has committed to his current job as president-elect of the Young America’s Foundation — a group that promotes conservative ideas among young people — until 2025.

Until his defeat to Gov. Tony Evers in 2018, Walker was a career politician since first being elected to the state Legislature in 1993.

He served four terms in the Legislature before being elected Milwaukee County executive in 2002 during a special election.

Walker was elected governor in 2010. Shortly after, he drew national attention when he introduced legislation that limited collective bargaining rights for most of the state’s public employees. Doing so led to a recall effort in 2012, which he won.

Walker said he sees similarities between the recall fight he went through and what Trump is facing now with the Democrat-led impeachment inquiry.

"A number of Democrats said it could backfire and what we saw in the end, was those people were on the mark," Walker said. "It galvanized a lot of Republicans and in the end, a number of independents said 'this governor should have a chance to fulfill his term.'"

Walker said he thinks the impeachment inquiry will backfire the same way his recall effort did. He pointed to the latest Marquette University Law School poll as evidence that's already began.

The poll, released Nov. 20, showed support for the impeachment of Trump is slipping among Wisconsin voters. The poll found that 40 percent of voters believe Trump should be impeached and removed from office, while 53 percent oppose impeachment and removal.

"It’s starting to wear a little thin," Walker said. "People are starting to question does the opposing party have an actual plan or is the whole focus impeachment. I think that will backfire. And I think in the end, it makes it more probable that the president gets re-elected."

Walker said the Democratic candidate he worries about most is Vermont Sen. Bernie Sanders, because he's the most authentic. And that's what resonates in the Midwest.

The last year of Walker’s term was focused on bringing Taiwanese electronics manufacturer Foxconn to Wisconsin. In doing so, the GOP-controlled state Legislature and Walker approved the state’s largest-ever incentive package — $3 billion — for Foxconn.

Walker said he visited the Foxconn development in Mount Pleasant two days before Thanksgiving and still believes he made the right choice for Wisconsin.

"They are definitely by late spring, early summer filling up a number of buildings," Walker said. "I’m optimistic they are going to transform the state’s economy. This is going to be one more gigantic boom to an area of the state that is already booming."

Since breaking ground in 2017, Foxconn’s plans for its Racine County facility have changed several times.

The company originally was going to build large flat screens with a so-called Gen 10.5 plant. Foxconn said market changes prompted the company to shift to a smaller Gen 6 facility.

In early 2019, Foxconn executives hedged briefly on whether they would be doing any manufacturing in the state at all. The company says the Gen 6 facility, currently under construction, will be operational in late 2020.

Foxconn has remained committed to creating 13,000 jobs in Wisconsin. The company missed its jobs target in 2018, also failing to receive state tax credits.

The Wisconsin Economic Development Corp. will receive a report from Foxconn on Dec. 31 to determine whether the company qualifies for state tax credits.

Walker said he has also met with former Foxconn Chairman Terry Gou, and he’s optimistic Foxconn will fulfill, or exceed, the job’s promise.

"Part of the reason they are here, in the U.S., was a pretty good, calculated decision, that with this president’s trade policies, they wanted a foothold in the U.S.," Walker said. "We knew all along how exactly they did that. And that there would be adaptions along the way. That’s the beauty of the deal we struck."

Walker used his opening remarks to discuss the reducing the national debt — an issue he has been championing since spring.

Using Congressional Budget Office numbers, he said by 2025, the national debt will be $30 trillion, with total revenue being $4.6 trillion. Walker compared that to a person making $46,000 a year with personal debt of $300,000.

"Now they are at a point where everything they are borrowing is to pay off interest," Walker said. "I think if this was a friend or family member, we would have an intervention."

In March, the Center for State-led National Debt Solutions announced Walker would serve as its national honorary chairman.

The group is campaigning for a U.S. constitutional amendment to balance the federal budget.