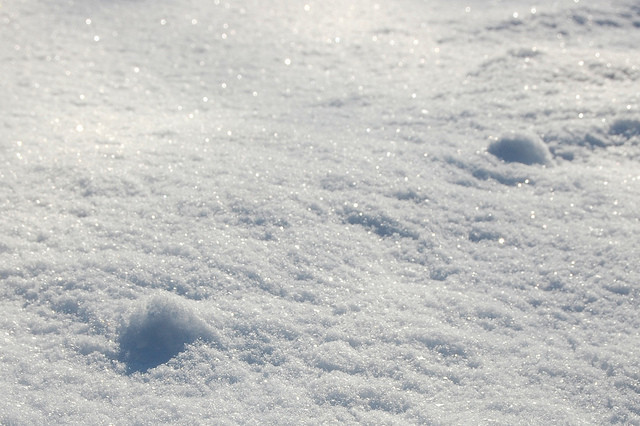 Snow sparkles are caused when the sun's rays hit ice crystals at just the right angle for an observer to see them. Photo: Jonathan Bloy (CC-BY-NC-SA).

Science Of Snow Sparkle, As Explained By UW Weather Experts

Ice Crystals On A Sunny Day Can Create Quite A Spectacle
By Judith Siers-Poisson
Share:

It can be magical to see a landscape transformed by a layer of pure, white snow. It’s even more enchanting when a weather phenomenon called snow sparkle occurs.

Snow sparkle is possible on a sunny day when there are flat ice crystals on the top of the snow’s surface, according to Steve Ackerman, a professor of atmospheric sciences and director of the Cooperative Institute for Meteorological Satellite Studies at the University of Wisconsin-Madison.

“As the sun comes down and hits those ice crystals, they act like mirrors. So what you’re seeing is individual ice crystals that the sun is reflecting off of,” Ackerman explained.

The usual white sparkle is caused by light reflecting off of the top of the ice crystals. Ackerman also said that when the light bounces off of the bottom surface of the crystal, color can be created.

“The color begins to separate, just like in a rainbow. They get refracted, so you see red twinklings and so on,” Ackerman said.

Dry conditions can increase the likelihood of seeing snow sparkles. Jon Martin, a professor of Atmospheric and Oceanic Sciences at UW-Madison, said that may be the case because ice crystals often stay separate in drier conditions.

On the other hand, Ackerman said that in moist conditions, the crystals are more likely to grow. He explained that water vapor in the atmosphere can settle onto existing crystals and transform into a solid state — a process he said is called “deposition.”

Even a career scientist like Ackerman gets a lot of enjoyment out of snow sparkle. In fact, he said, it’s something of a hobby for him to look for it.

Here's a short video from Scotland that captures the reflections. A video from Michigan shows that the effect can be seen as snow is falling as well.