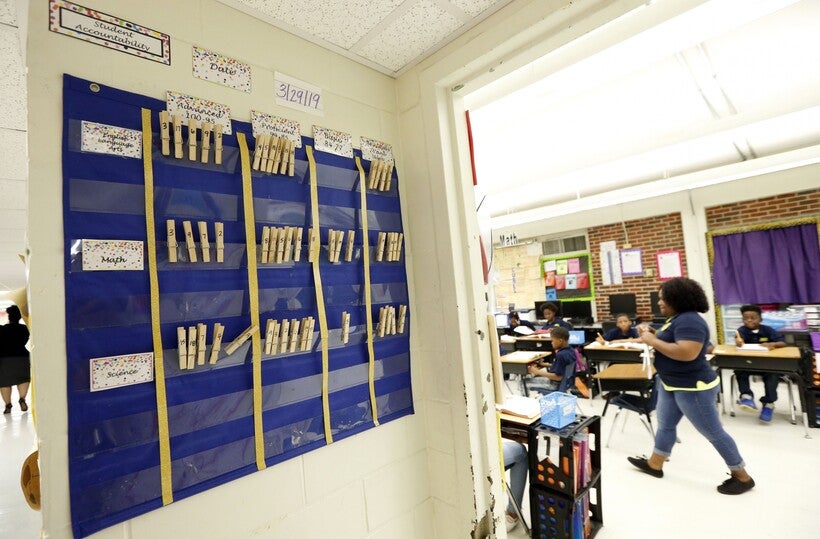 Nearly 70 percent of rural Wisconsin schools are short at least one teacher
By Leah Treidler
Share:

With the first day of school only weeks away, rural districts in the state are scrambling to fill positions, prompting many to cut electives, increase class sizes and hire unlicensed teachers.

"I don't want to be doom and gloom," said Jeff Eide, the executive director of WiRSA. "Because support staff are stepping up big time and doing things that have to be done just because they love what they're doing."

Over two-thirds of these schools have made changes to deal with staffing shortages, with at least 20 percent increasing class sizes, sometimes by 50 percent.

Many said they’ve cut electives and extracurricular activities. Some have upped teachers’ workloads or combined positions. Others have moved teachers around or hired long-term substitutes, sometimes putting them in charge of classes they have no experience teaching.

"If they have a shortage in the elementary area, they may be increasing the class sizes to meet that need," Eide said. "They may be bringing in a provisional teacher that is not certified at this time, but is going for their certification to meet the need."

Whitehall School District is among many districts struggling to fill crucial positions, according to Superintendent Mike Beighley. The district is short five support staff and one special education teacher.

"We're just seeing a dramatic reduction in the number of applicants for positions," he said. "Where we used to get 20 or 30, or perhaps even 100, now we get very few, if any."

Picking from the handful of applications, they’ve made offers for the special education position twice, he said. Both times, the candidate turned it down.

In this case, the shortage isn’t because of lower than average salaries, Beighley said. The base starting pay for teachers in the district is $40,299, topping the state’s average starting salary by more than $1,300.

"It's a combination of an awful lot of things," he said. "Certainly the pandemic and the stresses that came with it are part of that. I think the overall erosion of at least perceived public support of education adds into that. Certainly our ability to provide any long term stability for our educators is certainly not what it used to be."

Schools are careening towards a "fiscal cliff," he said.

During the pandemic, the state legislature froze funding for public schools, forcing administrators to pull from pandemic relief funds for basic expenses like salaries and utility bills. But that money will dry up in September 2024, and Beighley said that makes it hard for schools to plan for the future.

While the fiscal uncertainty and pandemic-related stress have made it harder for all districts to hire, rural schools face extra challenges, said School District of Arcadia Administrator Lance Bagstad.

The district is still short teachers for high school English, middle school science, third grade and fourth grade, plus two speech and language teachers and a school counselor. They’ve had little to no applications for each of the positions, Bagstad said.

"With the shortage of available teachers across the state of Wisconsin right now," he said, "nearly every position is becoming more and more critical and difficult to fill."

To deal with the shortage, they’re filling the positions with long-term substitute teachers, which he said makes it hard for students to create lasting connections with their teachers and puts extra pressure on remaining substitutes when teachers are sick or take days off.

One reason for the shortage, he said, is that the district can’t keep up with the salaries offered by bigger districts. He also said teachers often work from larger towns and have left when they find jobs closer to home.

Another is that many teachers, especially recent graduates, don’t want to move to the area.

"Rural communities don't have the amenities that large cities have," he said. "Things like DoorDash, or Uber, or Lyft, or just a movie theater down the streets, or the social connections that college students and recent college graduates have made in those larger cities."

This problem has been growing for years, he said, but there are solutions in the works. The University of Wisconsin-Platteville has created programs to support educators interested in teaching in rural areas, he said. In Arcadia and nearby districts, they’re considering helping teachers with tuition in exchange for committing several years to working there. The district is also looking for alternate ways to certify more people as teachers.

But one key way, he said, is rebuilding support for education and increasing state funding.

"Our public schools, especially in rural communities, need to be seen as an investment and not a burden on the tax base," he said. "If we don't start thinking that way, public schools are in trouble."