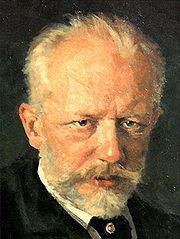 On November 6, 1891, Peter Tchaikovsky had just conducted his new symphonic poem Voyevode in a Moscow concert arranged by his young editor Alexander Siloti. The applause seemed restrained, and when Tchaikovsky came back into the artists’ greenroom, he destroyed the manuscript and told the attendant to gather all of the orchestral parts and bring them to him.

Siloti intervened, saying, “Excuse me, Pyotr Ilyich, but I am the master here, and I alone can give orders.” He ordered that all of the orchestral parts be taken to his house.

Tchaikovsky, who was already depressed, protested, “How dare you talk to me like that!”

Siloti answered, “We’ll talk about it some other time.”

The next night, a gathering was arranged at which friends of Tchaikovsky would try to dispel the gloom he felt about Voyevode. His brother Modest was first to arrive, and he reported that Tchaikovsky had been feeling very low all day and inclined to stay holed up in his hotel room.

At the gathering, Tchaikovsky’s friends were discussing the new piece without enthusiasm when Tchaikovsky arrived. The first thing he said was, “Well, what do you think of my Voyevode? Lousy, isn’t it?”

An awkward silence ensued, broken only when Tchaikovsky asked the outspoken composer Sergei Taneyev his opinion.

“Well,” Taneyev said, “it is rather poor. I mean, your love scenes–Romeo, for example, and Francesca, are fine, but here–”

“Yes, you are quite right,” Tchaikovsky said, “it’s a lousy piece.”

All efforts to cheer him up failed until inventor Julius H. Block played some phonograph recordings, including a performance of Tchaikovsky’s Piano Trio in A minor, which kept him entranced until 1:30 in the morning.

As he left, Tchaikovsky told Block, “I came here feeling sick and worn out, but I leave you completely cured and happy. Allow me to repeat the cure whenever I feel depressed.”

Julius Block tells the story in a reminiscence of his friendship with Tchaikovsky.