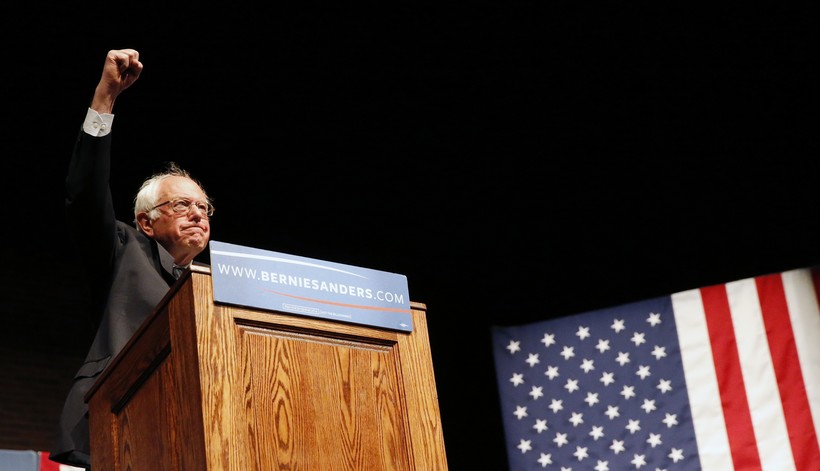 Sanders gives a victory speech after the Wisconsin primary was called for him Tuesday.

The lopsided victory paired with the modest reward illustrates the difficulty Sanders faces in catching Clinton in the national chase for the Democratic presidential nomination.

It was a commanding win by Sanders, but because of the way the Democratic Party allocates its delegates, it won't change the trajectory of the national race.

The Wisconsin Democratic Party distributes its delegates proportionally, some on a statewide level and some by congressional district, with more weight assigned to districts with strong Democratic turnout. Under that system, Sanders won a total of 48 delegates Tuesday. Clinton won 38.

That does not include the party's unpledged delegates — also known as superdelegates — who are Democratic members of Congress, officials in the state party leaders and Democratic National Committee members from Wisconsin. Superdelegates can support whomever they choose in the presidential primary and are not bound by the result of the popular vote.

Prior to Tuesday's primary, six out of Wisconsin's 10 Democratic superdelegates had already said they'll support Clinton. That raises her Wisconsin delegate total to 44, or just four fewer than Sanders.

To put that in some context, if Democrats operated under the same guidelines as Wisconsin Republicans, Sanders would have nearly swept Wisconsin's delegates.

Nationally, Trump is still the frontrunner among Republicans, with 743 delegates won compared to 517 for Cruz.  GOP candidates need 1,237 delegates nomination.

Correction: An earlier version of this story reported that Sanders won all of Wisconsin's congressional districts. He won all but one. The story has been updated.