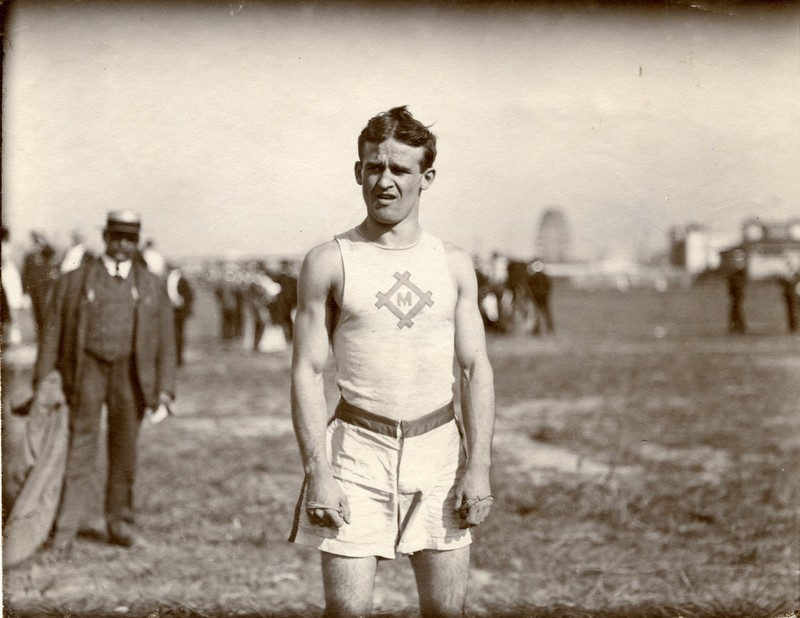 Hahn was born in Dodgeville on Sept. 14, 1880. He came to running late, at least compared to today’s sprinters. In high school, he took part in boxing, track, and football, but he didn’t seriously take up competitive running until he was 19 and a student at the University of Michigan.

Recruiters had lured him to Michigan after seeing him run at a county fair. He was small and thin for a runner, but had powerful legs and a quick start.

Hahn, who was said to train on frozen Wisconsin lakes, set his first record in 1903 for the 220-yard dash, which stood for 20 years. He racked up championships in the 100- and 200-yard dashes at competitions around the country. And at the 1904 Olympic Games in St. Louis, Hahn, representing the Milwaukee Athletic Club, won three golds in the 60, 100, and 200 meter races. He repeated his 100-meter victory at the 1906 games in Athens, a feat not accomplished again until Carl Lewis did it in 1988. Asked about his experience at the 1906 Games, Hahn said, "We had a good time."

Hahn retired from active competition after the games. He received a law degree from the University of Michigan but never practiced law. He instead became a track coach (and sometimes boxing coach, too) at various colleges around the country. He also wrote a book called "How to Sprint" that became a running classic and one of the first books on sprinting.

*1906 was an off year for the games, and some purists insist that the 1906 Olympic Games don't count as a real Olympics because it was held outside of the four-year cycle to celebrate the 10-year anniversary of the modern games.