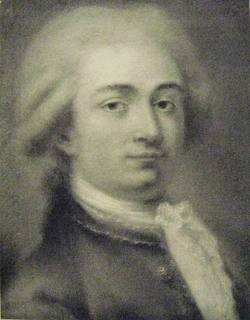 Antonio Vivaldi taught at Venice’s Ospedale della Pietà, an institution for orphaned or abandoned girls, but he had further ambitions, and so he also began managing the San Angelo Theater as a producer of operas.

At the same time, he was also a good salesman, and, on one occasion, he sold some music to a visitor and then made a pitch for a way to make some extra money out of it.

Johann Friedrich Armand von Uffenbach had made a big hit with Vivaldi’s Opus 3 concertos in 1713 when he had introduced them to some fellow amateur musicians in Frankfurt, and, two years later, he traveled to Venice to meet their composer and found that Vivaldi was a persistent salesman.

Uffenbach went to the theater and saw an opera toward the end of which Vivaldi played a solo violin accompaniment of such virtuosity that the visitor found it frightening. Uffenbach wrote in his journal that Vivaldi “brought his fingers up to only a straw’s distance from the bridge, leaving no room for the bow,” and played fugues with such speed that Uffenbach was awestruck, even though didn’t particularly care for the sound of the resulting music.

In the month to follow, he attended two more operas, and left word that he would like to see Vivaldi to make a gift of some wine and buy some concerti grossi. One evening after supper, Vivaldi came over and again demonstrated the virtuosity that the German so admired, although Uffenbach thought that the slow movements weren’t as lyrical as they should have been.

Three days later Vivaldi came over again, this time with ten concerti grossi that he claimed to have written just for Uffenbach. When the German bought some of them, Vivaldi offered to teach him how to play them right then and there as the first in an ongoing series of lessons.

As far as Vivaldi was concerned, music and commerce were tightly linked.