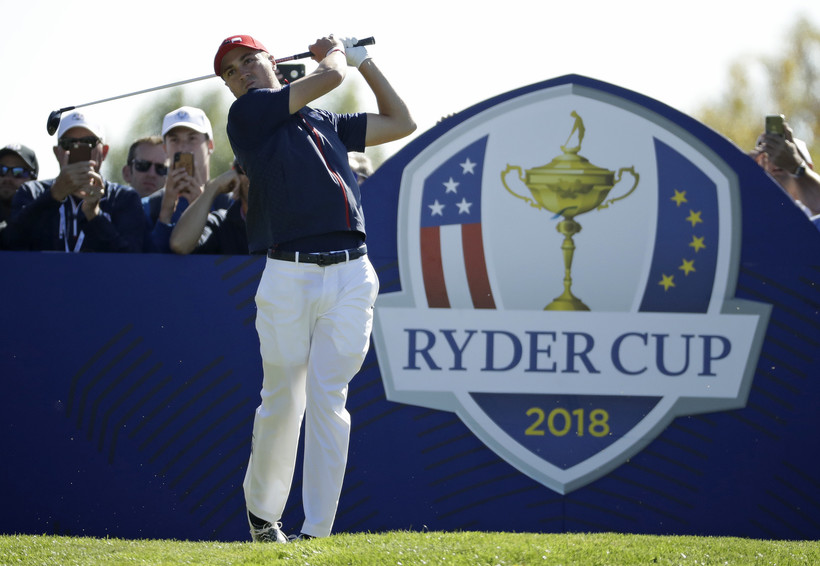 Justin Thomas of the US plays from the 6th tee during a singles match on the final day of the 42nd Ryder Cup at Le Golf National in Saint-Quentin-en-Yvelines, outside Paris, France, Sunday, Sept. 30, 2018. Matt Dunham/AP Photo

Ryder Cup, Set For Kohler, Postponed Until 2021 Amid Coronavirus Pandemic

The Ryder Cup, originally set to take place this year in Wisconsin, has been postponed until 2021 due to the coronavirus pandemic, golf officials announced Wednesday.

The biennial golf tournament was scheduled to be held Sept. 22-27 at Whistling Straits in Kohler. It’s now set for Sept. 21-26 of next year.

Golf officials said they worked with the Centers for Disease Control and Prevention, and state and local officials to make the decision to delay the tournament, which pits American and European golfers against one another in match play.

Seth Waugh, CEO of PGA of America, said he even reached out to Green Bay Packers CEO Mark Murphy to discuss the situation surrounding the pandemic in Wisconsin.

Golf was one of the first sports to return after live sports were largely postponed in early March. Several tour players and caddies have tested positive for the coronavirus, but the PGA has continued to host events without fans in attendance.

Ultimately, it was a difficult decision to delay the Ryder Cup, Waugh said. It came down to the fact that the fans play a unique role at the exhibition event.

"It really came back to the conclusion that there was zero certainty we could do it with fans," he said.

It would be especially difficult for fans from Europe to attend, Waugh said. The current nationwide resurgence of the virus also contributed to the decision, he said.

Fans with tickets to the event will be able to use them next year, officials said during a Wednesday morning news conference. Tickets sold out almost immediately when they went on sale last year. Ticket holders who can't attend the Ryder Cup in 2021 will be offered a refund.

If coronavirus concerns prevent the event from taking place next year, it will be canceled, Waugh said.

"We’re hopeful that we will hold it, but all bets are off in terms of what’s going on in the world," he said.

The PGA of America and its partners are committed to hosting the event in Sheboygan County if at all possible, he said, noting the Kohler family has been a "great partner."

Waugh, a former investment bank CEO, said moving the Ryder Cup was the most difficult deal of his career given the large number of stakeholders, including players, fans, sponsors and media partners.

On Tuesday night, Waugh spoke to Wisconsin-native Steve Stricker, captain of the U.S. team. He said Stricker supported the decision to postpone the event so that Wisconsin can host the Ryder Cup "it deserves" next year.

The event was originally expected to bring about 40,000 fans per day to Sheboygan County. According to Ryder Cup officials, fans from more than 90 countries attended the 2018 event in Paris.

In 2019, David Kohler, president and CEO of Kohler Co., told reporters hosting the Ryder Cup could have an economic impact of $135 million. It was originally set to take place just weeks after the Democratic National Convention in Milwaukee, which was also set to bring millions of dollars to the region before it was upended by the coronavirus pandemic.

Subsequent Ryder Cups have also been moved back so the event can continue to occur every other year. After Sheboygan County, the Ryder Cup will head to Rome in 2023.

In 2019, Golf Digest named Whistling Straits one of the top three public golf courses in the country. It has hosted the PGA Championship, one of golf’s major tournaments, three times.

The Presidents Cup, another international golf tournament between Team Europe and Team World, has also been pushed back due to the schedule changes. It was set to take place in North Carolina in 2021. It's been moved to 2022, officials confirmed Wednesday.