'Romance' and 'Inspiration' From Siblings Sheku And Isata Kanneh-Mason 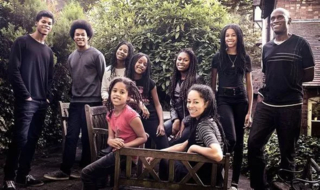 The Kanneh-Mason family goes on vacation

This week, there are two new releases to share, and they're from siblings: Young British musicians Isata and Sheku Kanneh-Mason are two of the older children in the talented Kanneh-Mason clan.

There are seven kids in the family, all of whom are serious musicians, which was somewhat of a surprise since their parents are not musicians. Their father is a physicist from Antigua and their mother was a professor of English literature, originally from Sierra Leone.

Cellist Sheku Kanneh-Mason is just 19, and his release, "Inspiration," came first. He was named the 2016 BBC young musician of the year (the first black musician in the history of the awards) and became a worldwide sensation after performing at the wedding of Prince Harry and Meghan Markle in 2018.

"Inspiration" provides an interesting and varied soundscape, from "The Swan" from "The Carnival of the Animals" by Camille Saint-Saëns, to the first Shostakovich cello concerto with the Birmingham Symphony Orchestra. The recording finishes with a gorgeous Tom Hodge arrangement of Leonard Cohen's "Hallelujah" for two cellos, violin and viola.

Still young at 23, pianist Isata Kanneh-Mason is the oldest of siblings, and her new release focuses entirely on the music of Clara Schumann during this bicentennial year of Schumann's birth. As with her brother's recording, there's a nice variety for listeners, including the powerful "Piano Concerto in A Minor," performed with the Royal Liverpool Philharmonic directed by Holly Mathieson. There are also some works for violin and piano, and the "Piano Sonata in G Minor," which Clara Schumann composed for her husband Robert. It was not published until the 1990s.

These two Kanneh-Mason siblings already demonstrate musicality, technique and power. It will be interesting to see what else comes from them and from their brothers and sisters.