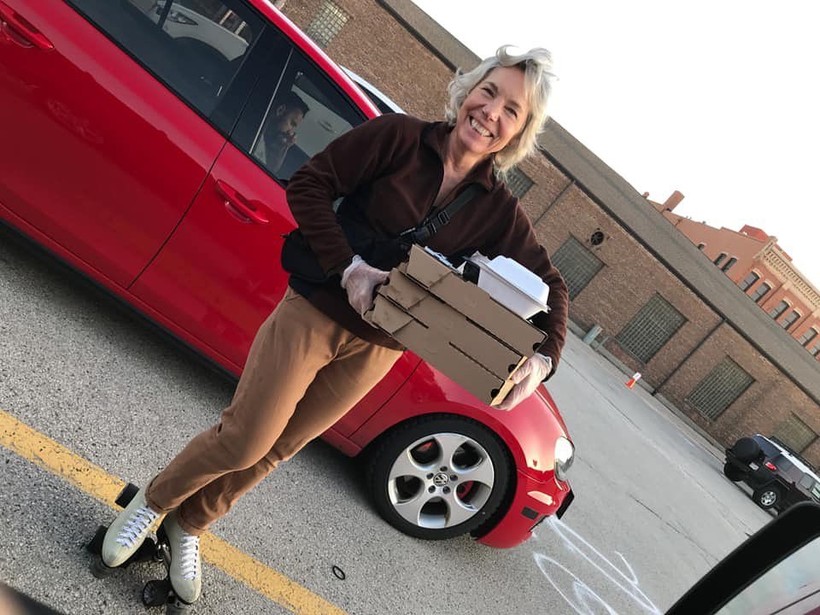 At Il Ritrovo in Sheboygan, staff members are delivering carry out items on roller skates. It's just one of the changes the restaurant has made in the wake of the new coronavirus, said owner Stefano Viglietti. Courtesy of Il Ritrovo

1 Restaurant Near Madison Has Even Opted To Remove Prices From Its Menu In Order To Support Those In Need
By Megan Hart
Share:

Wisconsin's hospitality industry has, of course, been affected by the new coronavirus. Some restaurants have already shuttered. Many have begun to offer carry-out meals. Viglietti is among those experimenting with ways to adapt.

The team at Il Ritrovo developed a frozen pizza now available in two flavors. They've sold so well, Viglietti said he'll continue offering them when business gets back to normal. Customers can call in to order family-style meals, pizzas or even groceries. Employees on roller skates now deliver orders right to customers in their cars. Viglietti said it's a fun and efficient addition inspired by childhood memories from a drive-in Sheboygan Falls custard shop called the Point.

"I just remember the giddy expectation when the person came out on skates and they were coming toward your car," he said.

Viglietti’s restaurants use local ingredients as often as possible. For that reason, he said he isn't too worried about supply-chain disruptions. (Although he did admit to having a sleepless night over pizza boxes).

Ultimately, the important thing is keeping his businesses running for the 120 staff members who work there, Viglietti said.

"Our job is to keep feeding people, to keep people working," he said. "I've got so many employees who've been with me so long and I owe them a lot."

Many restaurants, breweries and bakeries across the state are coming up with creative ways to attract business. To support local restaurants, Viglietti encourages those who can to purchase gift cards. Some places are even running specials on them.

Customers who purchase a $50 gift card to Uncle Mike’s Bake Shoppe in Green Bay receive a free kringle, said owner Mike Vande Walle. Though most Wisconsinites know Uncle Mike's for its signature pastry, the bakery made national headlines recently with a new product.

Last week, Uncle Mike’s began selling cookies featuring the face of Dr. Anthony Fauci, the director of the National Institute of Allergy and Infectious Diseases, who has gained national recognition from his appearances at the White House's coronavirus briefings. Now, they're being shipped across the country. 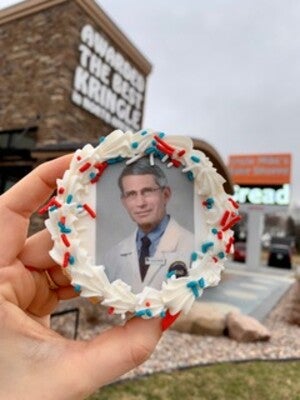 The new coronavirus has even inspired one Wisconsin restaurant to change its business model entirely.

Cliff "Cooks" restaurant opened last year in the rural town of Barneveld. Last week, its owners, Cliff and Yvonne Hooks, decided to remove prices from the menu. Instead, they ask customers to donate if they can.

The couple wants to help address food insecurity in rural communities, which will likely be exacerbated by the many layoffs occurring all over the state, said Yvonne Hooks. She takes orders while her husband cooks. Even though their restaurant is open for breakfast and lunch, the Hooks are also preparing and delivering dinners to some of their neighbors in need.

The change to their menu will be permanent, Yvonne Hooks said. The restaurant has adopted a new name, the Barneveld Community Cafe, and it's becoming a nonprofit organization.

Since the restaurant was covered by CNN, the Hooks have heard from new fans all over the country who support their mission. Some people have come by to make donations without ordering anything from the menu, Yvonne Hooks said. Many others have paid more than the original menu price for their meals, she added.

"I just kind of think this is what neighbors should be doing for neighbors," she said.