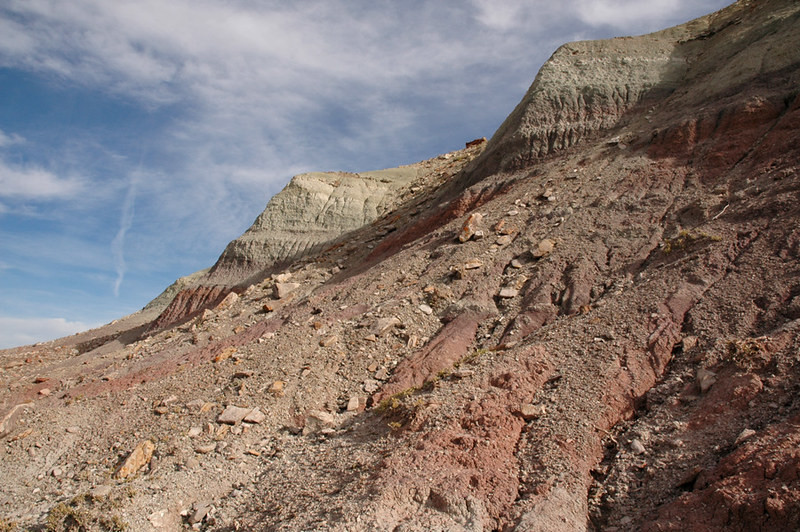 Scientists Hypothesize Sauropods Swallowed The Rocks Native To Wisconsin That Were Discovered In Wyoming
By Elizabeth Dohms-Harter
Share:

Smooth, quartzite rocks found in a rock formation in Wyoming that look a bit out of place — and are much more similar to rocks in Wisconsin — could be proof of dinosaur migration behavior and diet.

In a research article published In Terra Nova in February, a possible explanation for the 1,000-mile journey of these rocks is that they were carried in the stomachs of sauropods who picked them up in Wisconsin as a way to help digest their food.

This formation contains fossils of dinosaurs such as the allosaurus, stegosaurus and the long-necked sauropods. Although the Morrison Formation is primarily comprised of mudstones, there is evidence of other rocks not native to the area.

"Occasionally, you're going to come across these really hard, rounded cobbles made of quartzite and other hard rocks that really look out of place," Frederickson said.

Prior to this study, scientists thought these cobbles were gastroliths, stones swallowed by animals to help them digest their food. Frederickson said unlike mammals, dinosaurs couldn't chew their food and digest it, so they swallowed rocks to help grind down the plant materials. 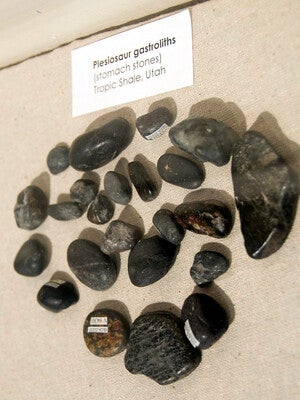 But the question still remains: How do we know those rocks came from Wisconsin?

Frederickson said it's because those rocks are a particular color and texture that's found in the state, namely red quartzite.

"Red quartzite is unique because a lot of the sites around that are out west aren't that deep red color," he said. "Here in Wisconsin, however, we actually have red quartzites that everyone in the state could go visit at Devil's Lake State Park."

These rocks are named Baraboo quartzite and are about 1.65 billion years old, Frederickson said. The distinctive color comes from the iron contained in the rocks.

To test whether the quartzite found in Wyoming was in any way similar to rocks in Wisconsin, scientists studied their isotopes and found the age of the isotopes in the Wyoming quartzite matched better to the Baraboo quartzite than to the rock closer to Wyoming.

"So, they're hypothesizing that those rocks were originally from Wisconsin," Frederickson said.

That hypothesis raises more questions; for example: is it possible or probable that dinosaurs traveled 1,000-plus miles?

Frederickson said that would certainly be a long journey, even for a large sauropod, but not impossible. He said during that time, the land between Wisconsin and Wyoming was likely very flat.

"We really don't know a lot about the biology and the behavior of these gigantic creatures," he said. "So, it's not out of the realm of reality that they could be doing this."

Frederickson said the research paper mentions there could have been a river running between the Appalachians to Wyoming that cut through Wisconsin that could have picked up some gastroliths and deposited them nearer to the dinosaurs in Wyoming.

Still, he said there's no reason to doubt the same dinosaurs that lived in Wyoming also lived in Wisconsin.

"There wasn't any clear barrier that was keeping them out," he said. "So this study, I think, is really nice because it's a reminder to us of how interconnected the continent would have been during the Jurassic (Period)."

Evidence of dinosaurs in Wisconsin is limited, Frederickson explained, because of erosion and glaciers during the last Ice Age about 20,000 years ago that wiped away much of the fossil record.

Wisconsin is home to very old animal fossils, such as those dating back 500 million years to the Cambrian Period — an era when a majority of the land that's now Wisconsin was covered by a shallow sea until about 385 million years ago.

But in Wisconsin, there's a large gap in the fossil record between the end of the Cambrian Period and about 20,000 years ago, when the last glacier hit.

Frederickson said based on data from neighboring states, it's likely Wisconsin would have been mostly land by the time the dinosaurs diversified in the Jurassic Period.