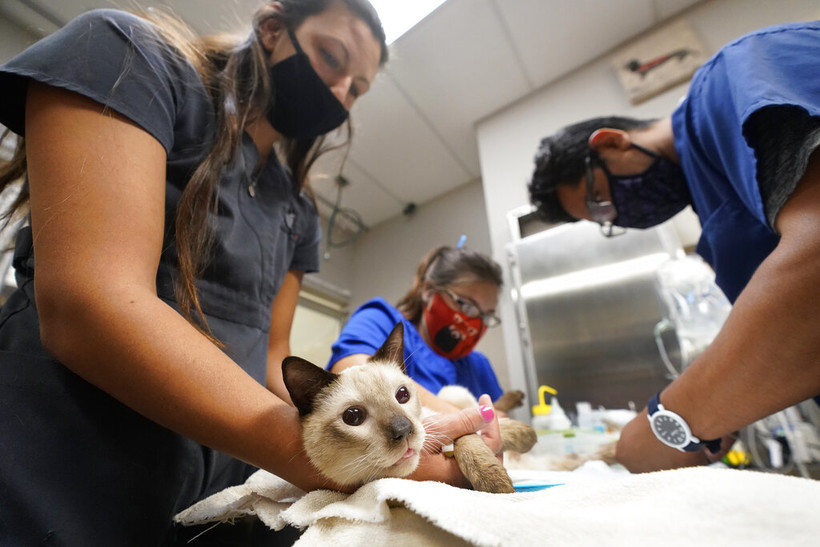 During the pandemic, the Janesville Animal Medical Center had to stop taking small animal emergencies after hours.

Veterinarian Danielle Myzk said they lost a doctor to an injury and other staff members to different jobs.

"We ended up needing — just to be able to maintain our sanity — to drop back down," she said Wednesday on Wisconsin Public Radio's "The Morning Show."

The medical center, which is located in Milton, took on such emergencies before because Myzk said they were an alternative that doesn’t involve driving an hour north or south.

For large animal emergencies, she said she’s driving to places such as Brodhead, Cottage Grove and Caledonia in Illinois. 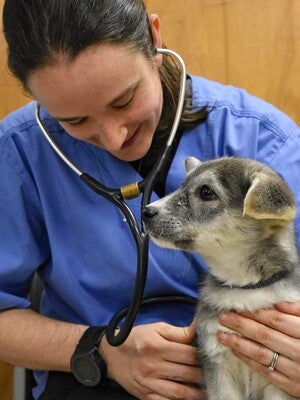 Danielle Myzk, a veterinarian at the Janesville Animal Medical Center, provides care to an animal. Photo courtesy of Danielle Myzk

"That’s a pretty large radius to be able to cover," she said.

Nationally, veterinary clinics have seen backlogs during the pandemic after dealing with a 4.5 percent increase in appointment bookings in 2020 and another 6.5 percent in the first half of 2021, WPR reported in October.

That increase, however, came with some capacity limits in place due to COVID-19.

Myzk, a 2019 vet school graduate, said she understands the burnout. She said veterinarians feel this pressure to take care of every animal they possibly can.

"So, you internalize that a lot. It tends to build up in your heart and your mind," she said. "And you’re like, ‘Well, maybe I could do more. Maybe I could do this. Or if I just give up 10 minutes with my family, I could have helped this pet instead.’"

Given the challenges veterinarians are facing, Myzk answered common questions she gets about navigating busy clinics, caring for your pets and more.

The following questions and answers were lightly edited for clarity and brevity.

Kate Archer Kent: What do you want your clients to understand about booking appointments?

Danielle Myzk: If you know that your vaccines are due in July of this coming year, going ahead and getting on your schedule two or three months in advance is the way to do it. A lot of people that we’re seeing now are calling three days before their vaccines are due, and we’ve been booked out three or four weeks in advance …

We’re seeing more sick pets, more chronically ill pets that are now being seen on a more regular basis. We’ve tried to fit those in because those are what’s urgent. That’s what needs to get seen sooner versus just getting your annual vaccine. But that comes at a cost of losing wellness appointments.

I recommend for every pet owner: Take a look. Call your vet. Just ask for the records and say, "Hey, when am I due for this?" And that way, you can be ahead of it and not be as frustrated when you call your vet and you’re due within a week and we can’t get you in.

KAK: How should people who have adopted pets during the pandemic make sure the pets receive healthy socialization?

DM: We might not be able to get in these big group settings, but you can still go walk around stores that allow dogs and bring training treats to get them slowly introduced to new sights, new sounds and new ways of going up to people just so they have a little bit, instead of being in the house and being in your backyard and that’s their entire life.

It really is important to get some of these new dogs out and about, such as outside on a hike, so you can see people at a social distance but still interact with them … Every little bit helps.

KAK: How are pets reacting as their owners return to the office after working from home?

DM: It’s kind of a mixed bag from what we’ve heard from owners. Some of them have been unfazed, like the golden retriever type of breed that is more socially used to having people coming and going.

But a majority of the ones that we’ve seen — especially new pets that have been brought in during the pandemic where the owners were working from home — a lot of them have experienced some level of separation anxiety. A good amount of calls come in every week saying, "My cat is really stressed. My dog is really stressed. How do I help them?" 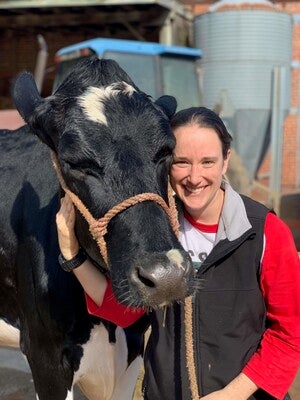 Danielle Myzk, a veterinarian with the Janesville Animal Medical Center, pictured with a cow. Photo courtesy of Danielle Myzk

KAK: How concerned should you be about your dog or cat maintaining a healthy weight?

DM: If you haven’t had an annual physical by your veterinarian, that’s the first and foremost thing that I would recommend. That will at least get you a body condition score. We use that as veterinarians to actually calculate the amount of calories — like a body mass index in humans — that that dog will need to either maintain or lose weight … It’s also about their muscle score and other things. Each breed also is very different — a bulldog does not look like a German shepherd.

KAK: Do you have any tips on how to kennel train your dog?

DM: Generally speaking, it’s sooner rather than later to make that kennel experience not one of punishment or where bad things happen. If your puppy pees on the rug and you throw them in the crate, they start to associate the crate with bad.

We tend to recommend using that as a safe space for dogs, especially puppies. Feed them in the crate. Have that door in an easily accessible place where they can always walk in and out. Put toys in there any time they go in there.

Start them off in short bouts of time. Don’t just put your puppy in there and leave for five or six hours. Give them an hour or two in there, then come back out. Every single time (during training) they go in the kennel, give them positive reinforcement — whether that be a treat, or some sort of toy filled with a little bit of peanut butter, anything to keep that as a positive association.

KAK: What do you think about declawing cats?

DM: I will speak only for myself. I cannot speak for other veterinarians … What my personal and professional opinion is that I’ve had declawed cats and I no longer declaw cats, mostly because of the fact that in some cat s— not every — when they get that first digit taken off, they tend to react in a more biting behavior. They no longer have their one source of defense. They tend to use their mouth, or they tend to have stressful issues because they can’t defend themselves. That can manifest in other things like urinary issues and things like that.

I personally do not believe in taking off a perfectly formed foot unless it’s medically necessary with those toes. But if you ask another veterinarian, they’ll be perfectly fine … Our practice still does declaw cats. But one of the things we really try to go above and beyond is educate on the long-term possible effects and allowing the owner to make that medical decision.