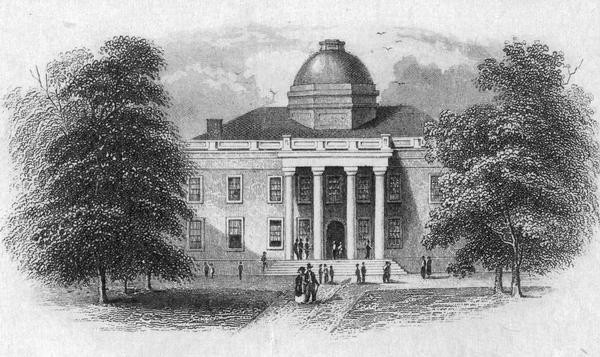 An engraving of the second Wisconsin State Capitol that appeared on the notes of the State Bank of Madison, the first bank organized under the Banking Law of 1851.

Wisconsin's first state constitutional convention met this week in Madison in 1846 to draft a constitution. It was the culmination of several years' effort to transition Wisconsin to statehood but the ratification of that constitution, a necessity for statehood, proved far more difficult than leaders expected.

On Oct. 5, 1846, 124 delegates met to write a constitution. Most of the delegates were Democrats (as was Henry Dodge, the territorial governor) but despite that clear majority, the party consisted of several factions loathe to agree on anything.

The economic and social problems of the time dominated debate. President Andrew Jackson’s war on banks and paper money influenced Wisconsin delegates like Edward G. Ryan of Racine who drafted a proposal to prohibit commercial banking in Wisconsin. Ryan, like the president, believed that legislatures were too easily bribed by banks so his bill forbade the legislature from creating or authorizing banks and allowed the circulation of paper money only in denominations less than $20. The article passed 79-27.

Banking wasn’t the only controversial item. Wisconsin’s proposed constitution allowed immigrants who applied for citizenship to vote and put the question of black suffrage to a popular referendum. And two years before the first women’s rights convention in Seneca Falls in 1848, Wisconsin’s constitution included a provision allowing married women to own property and keep their own wages.

When the constitution was presented to Wisconsinites for ratification, many residents thought Wisconsin had lost its mind. Racine attorney Marshall Strong objected most strenuously to the rights afforded women.

"When the husband returns at night," he wrote, "perplexed with care, dejected with anxiety, depressed in hope, will he find, think you, the same nice and delicate appreciation of his feelings he has heretofore found? Will her welfare, and feelings, and thoughts, and interests be all wrapped up in his happiness, as they now are? ... Will the word 'home' sound as sweetly? Where will be its guardian angel? O, sir, the effect of this law upon the husband, upon the wife, upon the children, and upon all the domestic relations will be most fearful."

About this and other issues, Wisconsin voters seemed to agree with Strong. The state’s voters – all male and all white, by definition – rejected the draft constitution in April of 1847.

A new convention met in December of 1847 and drafted a more conservative document that omitted any mention of women and black suffrage, and put the ability to charter banks up to popular vote.

Wisconsin voters accepted the new constitution in March of 1848.