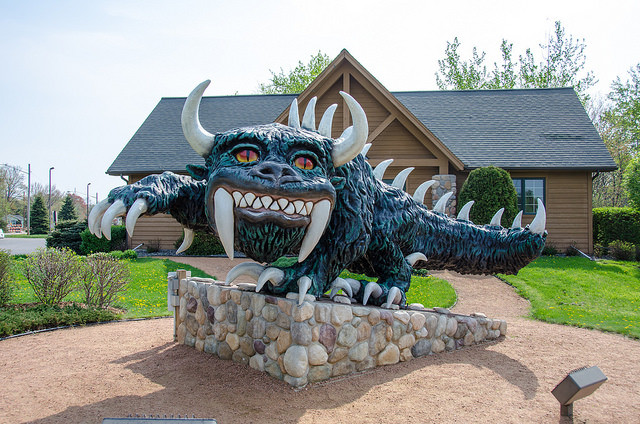 It’s green and spiky, with a taste for white bulldogs. The hodag has been a part of Rhinelander’s identity since 1893, when Eugene Shepard published his first story about the mythical beast.

So when officials in the town of Algoma, Michigan, reached out to Rhinelander officials about organizing their own community festival themed around the hodag, some Rhinelander residents didn’t take kindly to the idea.

"It even ruffles my green fur a little bit," said local historian Kerry Bloedorn. "I feel defensive about it, on a personal note."

Some Rhinelander officials even called for an attempt to trademark the beast’s image as a counter to Algoma’s proposal. City Council members were hostile to the idea of cooperating with the Michigan town, according to a report by the Northwoods River News.

Bloedorn is the coordinator of the city’s Pioneer Park Historical Complex, a history park that includes exhibits from the city’s past, including a whole lot of hodag history. He tells a version of Shepard’s tale all summer long to park visitors, and he’s researched its history.

The hodag has its roots in lumberjack and Native American lore, he said — and there were plenty of lumberjack camps in Michigan where the story might have circulated.

"Truth be told, the hodag as a creature within lumberjack lore has been invoked in logging camp bunkhouses from Maine to Minnesota throughout the 1800s," Bloedorn said.

And in Algoma, there was even a 19th-century sawmill that locals called "Hodag mill."

However, that’s where the story ended for Algoma.

In Rhinelander, Shepard led entire publicity campaigns around the beast. He continued to write about it in newspapers, and even created an exhibit at the Oneida County Fair that allowed spectators to glimpse the "beast" through a curtain. That was the start of the city’s affinity for the hodag, Bloedorn said.

"Rhinelander has a 120-year-plus history of molding its identity and building a sense of pride in the hodag," Bloedorn said.

This is not the first time Michigan and Wisconsin have tangled over hodag history.

In 1984, an Associated Press story detailed a "schism" between the two state’s governors over "which state can claim rightful ownership of the hodag." Then-Gov. Tony Earl of Wisconsin was later quoted saying he was considering putting the creature on the endangered species list if Michiganders "keep trying to kidnap it."

The story and image of the hodag is widespread enough that it’s unlikely Rhinelander can do anything to stop Algoma from hosting its festival if it wants to. Algoma hasn't publicly made its intentions known.

But Bloedorn said maybe it wouldn’t hurt residents to have a little more confidence in their city's claim to fame.

"Even if another town happened to co-adopt the hodag or use it for whatever purposes," he said, "it’s not going to change Rhinelander being the home of the hodag." 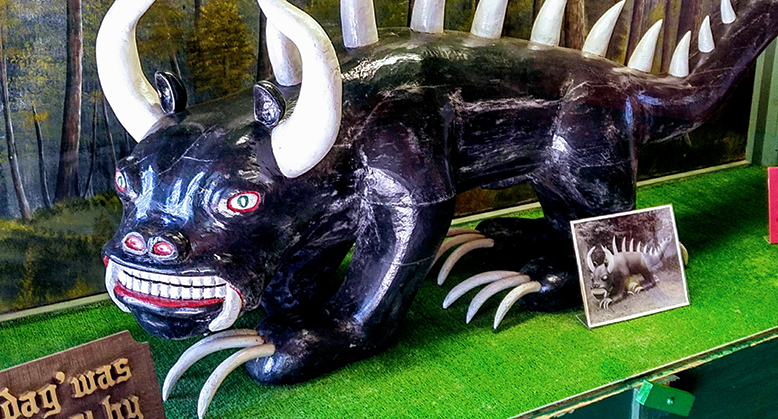 5 Fast Facts About The Hodag

WPR's "WHYsconsin" has received two questions in the last month about the hodag. Both Mike Kueny and Bobby Marshment-Howell of Madison asked for an explanation of what the hodag is. Here's some more information about this mythical creature.

It’s built like a massive lizard, with "spikes all the way down its entire length of its body (and) a fistful of needle-sharp pointed spears at the end of his tail," in the words of Jerry Shidell, a former Rhinelander mayor who’s portrayed Eugene Shepard in re-enactments. It has wide eyes and horns and "fangs that would rival a saber tooth tiger."

What does it eat?

Its favorite snack is a white bulldog.

Where does the story come from?

From lumberjacks’ tall tales, which themselves were likely influenced by Native American folklore. According to the Wisconsin Historical Society, the word hodag referring to a mythical Northwoods animal appeared in print as early as 1870, and "between 1889 and 1892, several newspapers from New Hampshire to Arizona ran fictional stories about gullible people conned by a promoter who claimed to have a hodag, which he showed them for a fee."

Was Eugene Shepard one of these con men?

In a way, yes. Shepard was a lumber professional when he wrote his 1893 newspaper column in The New North claiming to have captured a hodag. A local lumber company ran ads promoting the story, and Shepard took his hoax hodag exhibit on the road to multiple county fairs, where customers did indeed pay to see the "beast."

Why does Rhinelander love the hodag?

It’s a story that captures the wildness of the Northwoods, where Rhinelander was a far-north outpost. And Shepard was a salesman who succeeded in selling his community on the myth. Today a massive sculpture greets visitors on their way into town, and cartoon hodags abound in store windows.

"You drive one end of town to the other, (community pride in the hodag) is obvious and apparent," Bloedorn said.

Related Links:
"Route 51" Hunts For The Hodag
The Legend Of The Hodag
Hodag History