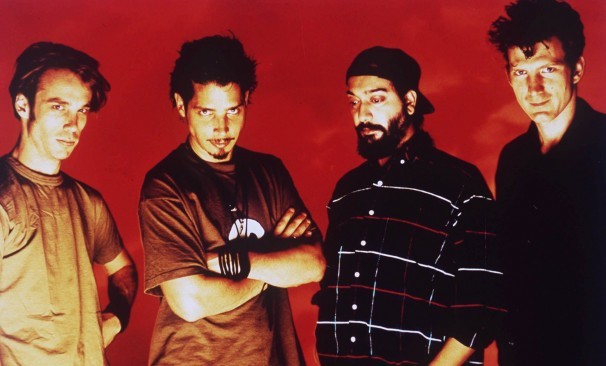 Adjectives like "dark," "vengeful" and "brimming over with apocalyptic imagery" aren't necessary the bywords for a classic album, but those are a few of the qualities that perfectly describe Soundgarden's "Superunknown" and helped to make it one of the defining albums of the 1990s.

While Kurt Cobain gave a frustrated Generation X its alienated anthem, it fell to Cobain's hometown compatriots in Soundgarden to give the era its definitive rock album. "Superunknown" wears its glum descriptors like badges of honor, but only because it accurately and artfully reflects the zeitgeist of those times, especially when paired with dinosaur-sized guitar riffs and howling vocals. And what isn't to love? Like the "thinking man's metal" that would come later, Soundgarden created heavy songs with true emotional content, a record head's diversified ears for sonics and just plain-old, pop-songwriting smarts.

And so in a new age likewise plagued by suspicion, dashed hopes and lingering uncertainty, perhaps the glories of past will have new relevancy. At least that's what the members of Soundgarden hope. A new reissue of "Superunknown" -- boasting a massive trove of extra tracks -- seeks to acknowledge the 20th anniversary of the record's arrival and to resurrect its reputation among rock fans when so much as happened in the years since then. (The reunited Soundgarden is touring North American yet again, this time on a co-headlining bill with fellow '90s alternative survivors, Nine Inch Nails.)

The reissue comes in two expanded forms -- a two-disc deluxe edition and a five-CD "Super Deluxe Edition" box set -- that boasts demos, rehearsals, alternate versions, B-sides, concert performances and in the case of the latter, a disc of the album mixed in Blu-ray Audio 5.1 Surround Sound. While this rerelease doesn't exactly burnish the legacy of "Superunknown" with unreleased gems, it does effectively deepen one's appreciation for what these musicians accomplished all those years ago.

The record, released in the early part of 1994, marked the apogee of grunge and the pinnacle of the entire '90s alternative rock movement. Within weeks of its release, Cobain would be dead and the white-hot media frenzy about all things Seattle would cool. The corporate hype machine that had lionized so many underground-rock figures in the early part of the '90s -- pushing edgier, more challenging artists to be included in the mainstream -- would shift the public's attention back on more outwardly joyful, plastic performers like Britney Spears, Christina Aguilera and the like. The counter-revolution had seemingly won.

Fans still had "Superunknown" as a relic of those days, and while Soundgarden would call it quits amid internal conflict as the Spears era came into its ascendency, the band left a record that easily ranks alongside Nirvana's "Nevermind," Pearl Jam's "Ten" or Radiohead's "OK Computer," even surpassing them in many respects. It never pandered to its audience, nor did it beat listeners with its intellectuality. This was an ideal fusion of idea and execution.

With "Superunknown, Soundgarden distilled all of its musical moods and assorted influences into a refined collection with real range and potency. If their previous record, "Badmotofinger," won the band fans and media attention because it was the consummate rawk experience -- singer Chris Cornell's shirtless chest belting out eardrum-splitting screams and his head's tangle of curls bouncing to crushing metallic thunder -- "Superunknown" was unexpectedly more inward, nuanced, cerebral and emotionally complicated than any album the group ever produced. The rerelease basically gives another chance to appreciate "Superunknown."

While during the album's initial release cycle, singles like the misanthropic Beatles pop of "Black Hole Sun" and the hard-charging "Spoonman," soaked up most of the media spotlight, subsequent listens to this record brought deeper cuts like "4th Of July," "Mailman," "Fresh Tendrils," "Head Down" and "Like Suicide" to the fore. Instead of filler, these songs dove into surprisingly new directions and were distinct variations of the record's bleak theme. It's no coincidence then that when Soundgarden reunited a handful of years ago, these songs became staples of the group's live sets.

Song by song, the music on "Superunknown" remains oddly contemporary sounding. What was initially one of the record's odd outliers, "Head Down," has grown into a highlight of the disc. Conceived by bassist Ben Shepherd, the song blends folk blues and an Indian-influenced guitar melody to create a tripped-out slice of dark psychedelia. (Shepherd's other primary contribution, "Half," is still a screwy piece of performance art. Even a masterpiece needs its George Harrison moment.)

Meanwhile, sludge-heavy tracks like "Mailman" and "4th Of July" take the band's love of heavy rock to a creeping, punishing extreme. The rhythms trudge along, leaden by guitarist Kim Thayil's overpowering riffs, but instead of collapsing under the guitar's slow-moving oppressiveness, the music is liberated by it. Vocally, Cornell finally understands how best to use his considerable pipes. His voice hovers above the monsterous roar, crooning each line to tell these stories of underdogs who have now gone over to the dark side. By keeping his voice low in the mix instead of just belting it out, Cornell not only breaks with a tired metal cliché, but transforms these tales of woe into genuinely poignant moments.

However, it's the record's mini-epics that serve as the crucial pillars of "Superunknown." "The Day I Tried To Live" is simultaneously one of Soundgarden's troubling, spellbinding and lyrically imaginative songs in their canon. The same is true for "Limo Wreck," and although few would call Cornell a prophet (if he was, why did Audioslave happen?), it has the allure that with the passage of time, one can read a degree of foresight into the words. One could think his vengeful daydream as an allegorical indictment of consumerism, capitalism and the excesses of the Clinton era. But, while this world was expunged after Sept. 11, the language remains vivid and vague enough that listeners can image Occupy Wall Street embracing the song has a new rallying cry.

In the case of "Fresh Tendrils" and "Like Suicide," it's the slow-reveal nature of the music that beautifully builds the intensity to glorious effect. Laced by a murmuring clavinet, "Fresh Tendrils" features a revolving guitar refrain that spins and spins until the music final leaps off the track, exquisitely exploding with raw power and Cornell at full wail. "Like Suicide," the record's closer, is as close as Soundgarden came to a power ballad. In these minutes, the band at its most musically and lyrically majestic.

But beyond the familiar songs, most reissues releases promise both greater insights into the creation of the album as well as the prospect of a few masterworks that were unfortunately left on the cutting-room floor. In this instance, there aren't any songs inexplicably left in the band's archives. Instead, both editions of "Superunknown" offer listeners the true journey of this material. They can get a better understanding on how each song was crafted and refined over time until it was finally put onto vinyl rather than falling from the sky in completed form. It offers greater appreciation of Soundgarden as musicians and craftsmen (and special notices for "Superunknown" producer Michael Beinhorn for what he was able to pull out of the group).

The bonus cuts also demonstrate the band's weirder, artier instincts that were frequently underappreciated. Much is often made of the group's fondness for odd time signatures, but Soundgarden always seemed a little brainer than your average headbanging band. This was a "metal" band with an avowed love of '60 psychedelic pop (Beatles, Pink Floyd) and '80s hardcore punk (Black Flag) and covered material from such dispirit acts as Devo to the Ramones to Sly and the Family Stone. As the proof, the expanded edition surfaces some ideas that might have horrified the "Headbangers Ball" crowd of those days and yet, surely informed the "Superunknown" songs.

For most listeners, all of this music -- four hours' worth in the case of the "Super Deluxe Edition" -- is a test of endurance. Researchers and super-fans will lap up every variation that can be found here, but a song's evolution is never a critical factor. It's the finished product that really matters. There are several songs among the secondary discs that are fun or engaging listens. Fans can hear how a demo of "Birth Ritual" (the song the band played during their brief appearance in Cameron Crowe's "Singles") was initially recorded along the same lines as the more polished version that wound up on the movie soundtrack album. Cornell's solo, acoustic version of "Like Suicide" demonstrates how the song could contract from a massive showstopper into singer-songwriter fare and maintain its effectiveness.

Another stellar cut is a live version of "Fell On Black Days" that was recorded for the music video. This is a grizzled, neck-breaking rendition on the song (Watch the video and see a band who looks visibly tired of the road, but is also musically at the top of its game.) A rehearsal, instrumental version of "Half" is less exotic sounding than the studio take, and features an aggressive second part that was scrapped for the final product. During this part of the composition, the guitars are now playing offensive, are more menacing and striking out like a biker gang's theme music.

There's more strange stuff too. The boozy, punkish sneer of "Kyle Petty, Son Of Richard," points toward the loose-limbed, carefree spirit of the band's next album, "Down On The Upside." "Jerry Garcia's Finger" is wonderful soundscape, full of plinking cymbals, fluttering guitar/amp effects, drones and feedback trickery. This song wouldn't have made it onto anybody metal radio station's playlist.

Other tracks point to the creative directions not taken. A demo version of "Spoonman" has its central riff, but is an interesting mash of funky syncopation. "Bing Bing Goes The Church" is a stomping, rehearsal ditty that features contrasting, serrating guitar riffs and Cornell giving a silly spoken-word performance worthy of an open mic night. "Ruff Riff-Raff" is jam of more colliding riffs that suggest more work could have grown this song into something grander. An alternate version of "Fell On Black Days," titled "Black Days III," has different lyrics and a gooey, heavy-metal groove that suggests the song's original destiny was something more conventional. The same might have been true for a version of "The Day I Tried To Live" called "The Date I Tried To Leave." The rehearsal take included here has a malformed guitar lick and Cornell ad-libbing some offensive, dummy lyrics as he teases out a vocal melody. Of course, this unvarnished version offers a glimpse of Cornell and company's songwriting process. The box set's next track is rehearsal version of the full-fledged "The Day I Tried To Live" and highlights how much work went on between the times that someone hit the record button.

For completists, the expanded editions of "Superunknown" give that rare glimpse behind the curtain. For most listeners, however, all this music is unnecessary. Little of this added material could displace a "Superunknown" album track and in the big picture, its inclusion here doesn't amount to much in terms of underscoring what Soundgarden achieved at that point in time. "Superunknown" excels because of the finished product, not its journey, even if that trip was fundamental to the process.

"Superunknown" succeeded not only because it was a record released the right place and time. It resonated because of the attention to detail and the commitment to the artistic impulse that these songs represented. Born of those times, the music was crafted so well that it could live beyond it. The band finally did used their heads for something beyond just banging.