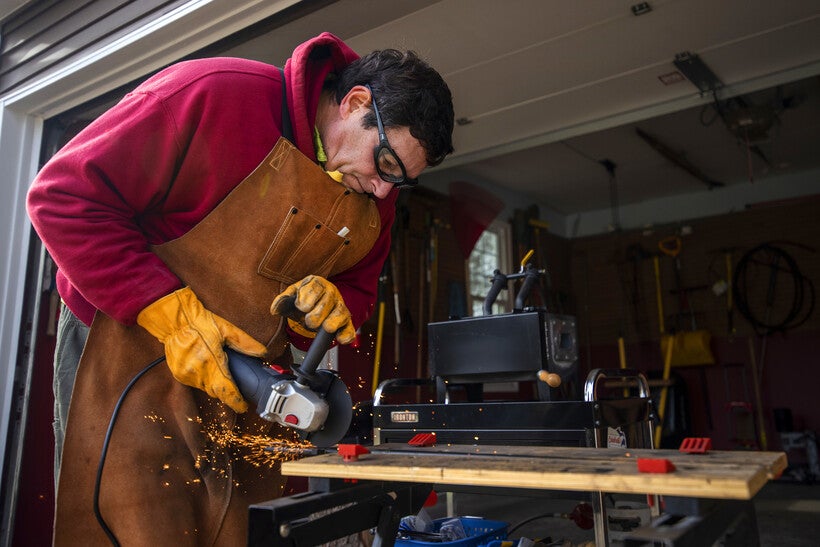 Jeff Wild says his demonstrations can be a new angle into rigid gun control debate
By Jonah Beleckis
Share:

When Jeff Wild is using 2,200-degree heat to forge guns into garden tools, he needs to be careful when dunking the scalding gun in water to cool it off.

Working with a hollow piece of steel has a higher risk of injury, he said, because steam shoots through the barrel.

But maybe that’s necessary when converting what he called a "tool of violence" into an instrument that brings life — a dangerous energy departs before a full conversion.

"Fire can be destructive," Wild said. "But fire can also be transforming." 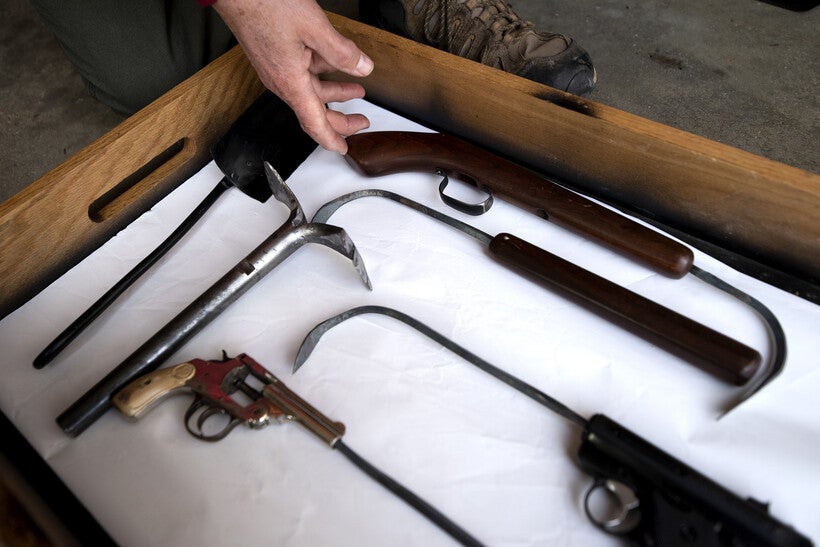 Firearms that Jeff Wild has transformed into tools are stored in a box Friday, Dec. 17, 2021, at his home in Madison, Wis. Angela Major/WPR

Wild, a 67-year-old retired pastor living on Madison’s west side, said recently on WPR’s "Central Time" that the public forging demonstrations he's held are an act of protest against gun violence.

His opinions about firearms were most deeply formed by the 10 funerals he presided over for men who died by suicide — six of them by use of a gun.

"I knew those people. I grieved their deaths, and I knew the implications and ramifications that it had upon their loved ones — spouses, children, extended family," he said in an interview. "That, to me, really affected me to the core."

The Centers for Disease Control and Prevention accounted for 47,511 deaths by suicide in 2019. About half of those involved firearms.

In Wisconsin, guns were the most common method of suicide from 2013-17, accounting for 49 percent of the deaths. Ninety percent of those deaths were men, according to the Suicide in Wisconsin: Impact and Response report shared by the state Department of Health Services in September 2020.

FOR HELP: If you or someone you know is considering suicide, call the suicide prevention lifeline at 1-800-273-8255, text "Hopeline" to 741741 or visit this page for phone numbers of crisis lines in each Wisconsin county. 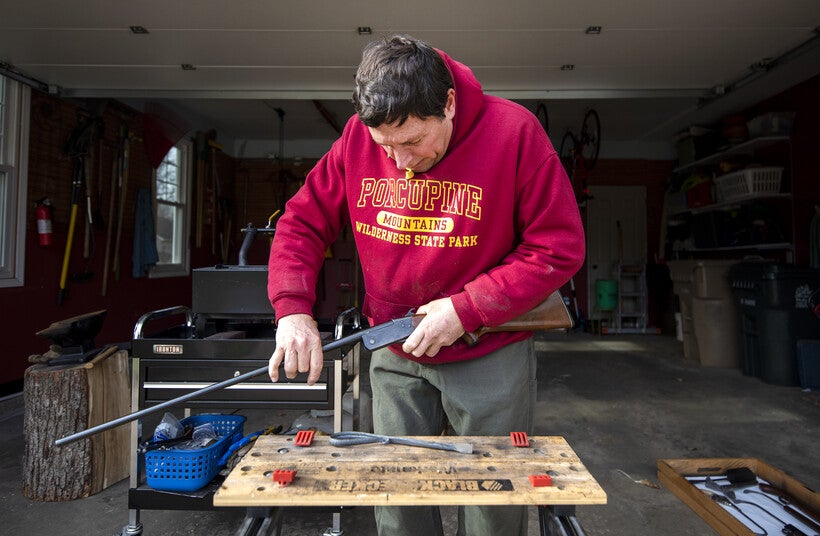 Jeff Wild disassembles a gun in his garage before cutting through the barrel Friday, Dec. 17, 2021, at his home in Madison, Wis. Angela Major/WPR

Wild said these suicides are "often overlooked," especially when compared to the attention put on mass killings.

Citing the figure that there are more guns in the U.S. than people, he said there are "just too many guns."

To be clear, he said he’s not calling for officials to go through people’s homes and take their guns away. But he thinks there is room to encourage some to get rid of their guns so there are fewer just "laying around."

His beliefs on guns were forged from funerals, but his inspiration for forging garden tools came from a book by Michael Martin and Shane Claiborne called "Beating Guns: Hope for People Who Are Weary of Violence."

Wild also cited a Bible verse from the Book of Isaiah: "And he shall judge among the nations, and shall rebuke many people; and they shall beat their swords into plowshares, and their spears into pruninghooks; nation shall not lift up sword against nation, neither shall they learn war anymore."

In learning about turning guns into garden tools, Wild said he could also tap into his previous job experience — a couple summers spent working at a foundry near where he grew up in Beaver Dam.

The metalwork fascinated him; how molten iron could be poured into molds to take its new shape. Items once firm, solid and strong are still malleable.

About two years ago, Wild bought his forge and took a blacksmithing course in Door County, The Cap Times reported. In the weeks after Thanksgiving this year, he held public forging demonstrations at James Madison Park and Wexford Park in Madison.

He said he decided to take his forging of guns into garden tools public after the not-guilty verdicts in the Kyle Rittenhouse case from Kenosha.

"I do remember being surprised and disappointed by the verdict," he said. "I understand the jury decided it was self-defense. I’ve come to the conclusion that self-defense is a very subjective kind of judgement, in my opinion." 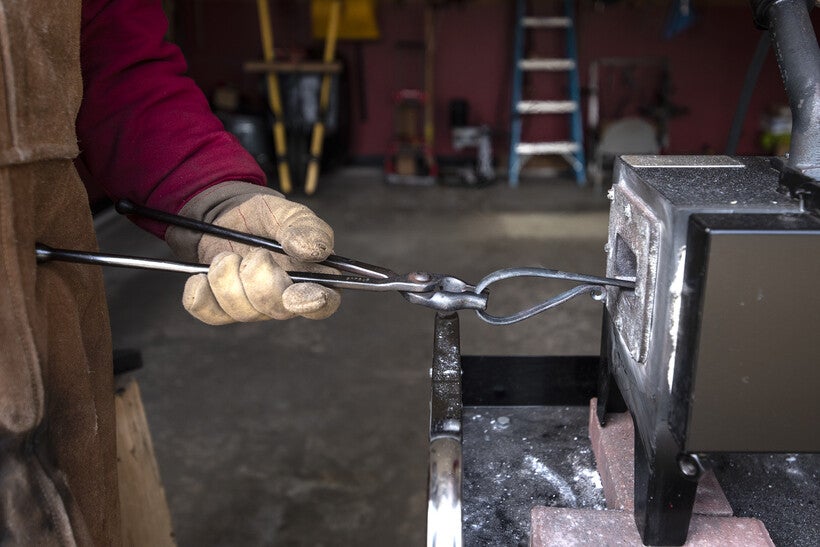 Jeff Wild uses a small forge in his garage Friday, Dec. 17, 2021, at his home in Madison, Wis. Angela Major/WPR

The gun control debate in the U.S. has been about as charged as any. Wild in interviews has mentioned his own history with firearms.

As a child, he received a pellet gun as a gift. Later, upon his father’s death, Wild inherited a .22-caliber rifle and a shotgun. Additionally, Wild about 10 years ago said he wound up with several guns that belonged to his stepfather.

He had amassed "quite a collection" of the unused weapons in his basement, so he chose to give them to a responsible friend, he said.

He hunted as a high school and college student, and he mentioned a hunter safety program he participated in through the National Rifle Association.

Wild sees forging as a new angle into the debate. He said he can give others "a new way of thinking, and in some cases even a new way of living."

"It’s much more effective for me to invite people to a demonstration, and (they can) see me making those changes and transformations," he said. "And then being able to talk about firearms to garden tools and our own transformation of our own hearts and minds."

He also wants to lean on faith, drawing from his 34 years as a pastor in Racine, Janesville and Madison.

Wild hopes to expand his reach. He wants to help reduce the number of deaths by firearms, and he’s open to invitations from advocacy groups and faith-based communities (those interested may email him at jtwildwi@gmail.com).

It’s not easy work, transforming guns or minds. He’s not able to put a gun in his "little" gas-powered forge once and hammer its essence away. It takes time, returning the material to the forge time and again until it has softened and is ready to change.

But after the steam has left the barrel and the gun’s shape has changed, Wild said he is "forever marveled" when holding the finished product.

"To fashion an instrument that could cause violence into a garden tool that produces food for people, myself, my family, as well as other people, is a very meaningful endeavor," he said. 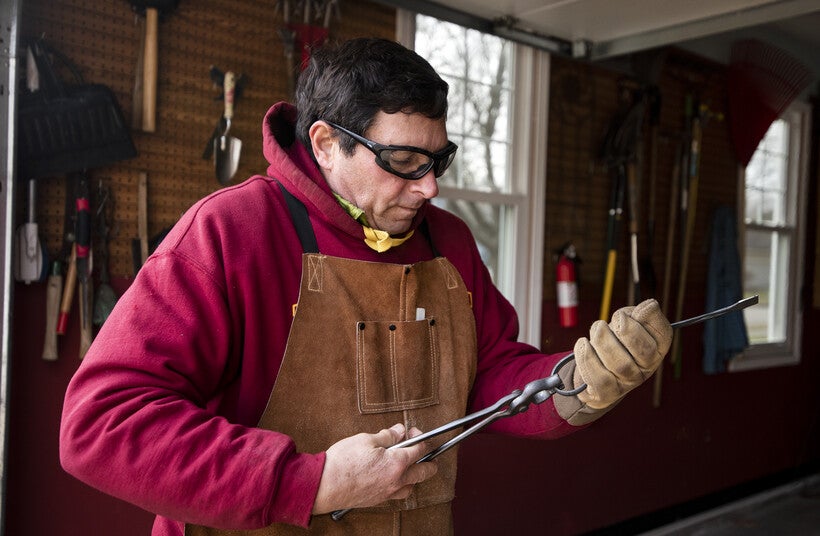