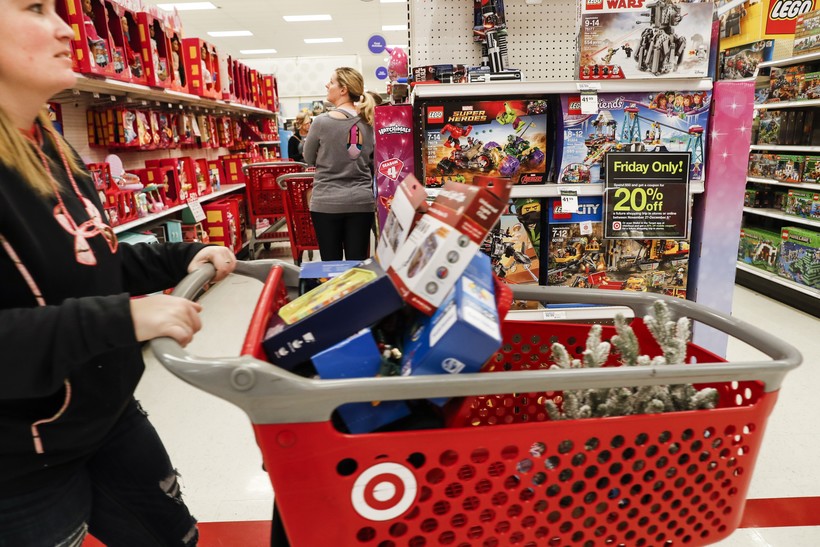 In this Nov. 23, 2018, file photo shoppers browse the aisles during a Black Friday sale at a Target store in Newport, Ky. John Minchillo/AP Photo

Black Friday has become the kickoff to the holiday shopping season, and it remains a crucial time for retailers facing big changes to in-person shopping during the COVID-19 pandemic.

Public health experts are recommending Wisconsinites avoid or severely limit their in-person holiday shopping this year as community spread of the coronavirus remains extremely high across the state. In light of the pandemic, many national retailers are offering more Black Friday deals online, and extending the shopping event that is usually two days of jam-packed stores and long checkout lines over multiple days or longer.

"The in-store experience is going to be so much different," said Hart Posen, a professor of management and human resources from the University of Wisconsin-Madison's Wisconsin School of Business.

Posen noted that many national retailers have clear capacity limits for their stores.

"The picture we have of Black Friday and the crowds angling for that television or that laptop, that's simply not going to exist this year," he said.

Kohl's Corp., the Menominee Falls-based retail chain, announced on Nov. 6 it will have deals throughout the month of November, including during its "Black Friday Week" which started on Nov. 22 and runs through Nov. 27. The company said it would increase health and safety precautions during "Black Friday Week," with more store exits to control traffic flow and store clerks offering masks to customers and limiting the number of people in the store when necessary.

Posen said some people may be turned off if they have to wait in long lines outside of stores.

"When they pull up to the store and see the long line and, you know, half-hour (or) an hour wait to get in ... if there are enough people there, they may turn around and go home," he said.

Jessica Ogilvie, an assistant professor of marketing at Marquette University, said the changes will add more responsibilities to a workforce that already receives little job training.

"It's adding a whole new layer to ... a sales job that already doesn't necessarily provide the resources an employee needs at that level," Ogilvie said. "So we're looking at employees that don't get a ton of support, a ton of training, before they're put on a sales floor. And in reality, you're now adding to their list of responsibilities an extra layer of safety precautions, of steps they have to take, of quite honestly, negative interactions they may have with customers as they ask them to manage these restrictions."

The changes to Black Friday come at the end of a difficult year for many retailers. Research from the University of Wisconsin-Oshkosh's Center for Customized Research in May showed that retail was the second hardest-hit sector in Wisconsin in the first few months of the pandemic following Gov. Tony Evers now-defunct stay-at-home order.

A long list of national retail companies also filed for bankruptcy, like JC Penney and Neiman Marcus, some of which Posen noted have been "a long time coming."

The financial realities of the pandemic have increased the pressure on stores looking to recoup some of the year's early losses during this holiday season.

Kohl's, for example, has weathered a loss in sales for every quarter in 2020 so far. In its most recent financial results, the chain reported $3.8 billion in net sales between August and October, down 13 percent from the $4.4 billion they reported over the same period in 2019. That loss actually marks an improvement from the company's second and first quarter results, which saw a drop in net sales of 23 and 44 percent respectively.

Following the drop in sales, the company announced in September that it would lay off 15 percent of its corporate workforce in what a senior company official called a "difficult but necessary" move.

"Fourth quarter for retailers tends to always be their ... biggest revenue-generator, (their) biggest kind of ramp-up," Ogilvie said.

Ogilvie said that for retailers, the fourth quarter is the one that typically generates the most revenue. But she said that this year, it may be challenging for retailers to generate the revenue they've come to expect from Black Friday because people may have less disposable income.

"That expectation of spending towards the holiday season is going to be ... a little bit different this year," she said.