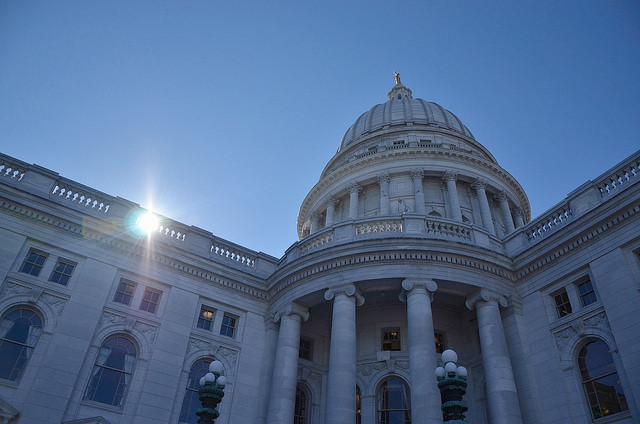 Republicans Reveal Plan To Break Up Government Accountability Board

The move was immediately blasted by Democrats and advocacy groups like Common Cause of Wisconsin, which said the proposal would transform a nationally renowned model into a "toothless backwater state agency completely under the control of partisan politicians."

The plan, crafted by state Rep. Dean Knudson, R-Hudson, would split the GAB into two separate commissions, one regulating ethics laws and the other covering elections. It would be similar to the system the GAB replaced in 2007.

Gone would be the six nonpartisan judges who run the GAB. In their place would be a board run by partisan appointees, evenly split between Republicans and Democrats.

"We have great respect for the retired judges that have served on the GAB," Knudson said in an interview on Wisconsin Public Radio, hours before introducing the bill at a press conference. "They just weren’t very well matched, in some cases, for the job that they were given."

Knudson said the regulators overseeing elections under his bill would be more up to the task.

"We’re going to have experts overseeing those elections. Our elections commission will actually have former clerks on the commission helping to oversee what goes on," he said.

Also gone would be the power of regulators to investigate potential violations of ethics and elections laws with an unlimited budget. Knudson said that's because the current GAB has too much power.

"They essentially had executive powers of enforcement, they had legislative powers in rulemaking, and they had judicial power in sitting as judges for who is guilty and who is not," he said.

Knudson said the GAB had in practice been a partisan body, citing the way it certified petitions for the recall elections and the way it redesigned ballots ahead of last year's elections.

While nearly every step of the recall process was vigorously scrutinized by Republican and Democratic attorneys two years ago, GAB staff said they followed long-established precedents for evaluating recall petitions. When Republicans challenged the GAB’s ballot redesign last year, their lawsuit was dismissed in short order by a Waukesha County judge.

State Rep. Terese Berceau, D-Madison, said she believes Republicans had other motivations for unraveling the GAB.

"I would say that the Republicans did not like the GAB's role of providing record on the John Doe probe of our governor," Berceau said.

Berceau said that unlike Knudson and many other Republican lawmakers, she served in the Legislature during the days before the GAB. She said the hands-off approach by partisans on the Ethics and Elections Boards set the stage for the legislative caucus scandal that eventually sent leaders from both parties to jail.

"What we didn’t have was the accountability that we were looking for," Berceau said. "There were state workers working on campaigns on state time on taxpayer dollars and this wasn’t being overseen."

Some of the groups that were instrumental in the formation of the GAB were quick to attack Knudson's proposal.

"This severe mockery of good public policy is being inflicted on Wisconsin for one reason," said Common Cause's Jay Heck. "To destroy and then assert control over an agency that did what it was designed to do: oversee Wisconsin's election, campaign finance, ethics and lobbying laws impartially and with a degree of independence from micromanagement by partisan legislative leaders and their lackeys."

Knudson urged people to hold off on passing judgement until they read his bill.

"It’s scrupulously bipartisan," Knudson said. "I challenge anyone to find that this is in any way, shape or form a power grab. It is not."

The Republicans introduced the bill during a Wednesday news conference at the state Capitol.

Editor's Note: This story has been updated to reflect that the news conference unveiling the legislation is over.