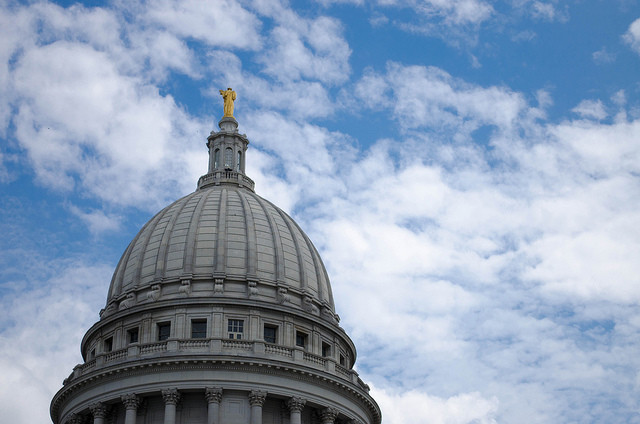 The Republican-controlled committee had already voted on Thursday to reduce borrowing for road projects from $1.3 billion to about $850 million. It also voted to make a series of tax changes, including cutting taxes for married couples and high earners subject to the alternative minimum tax.

Then, GOP lawmakers introduced — and subsequently approved on a party-line vote — a 24-page "wrap-up" motion that included proposals to curb access to a range of public information, from lawmakers’ emails to drafts of legislation.

The plan will also limit public access to emails between legislators and members of their staff and give legislators the right to restrict from the public any research or analysis they conduct to develop public policy.

"People who usually are either frightened of something or have something to hide change the rules if they're in the majority. Somebody in this building, somewhere, wants to hide something," he said.

All Republicans voted for the changes, including Hudson Rep. Dean Knudson.

"The legislative process involves talking with people and communicating with people. And at times, you want to be able to do that without creating a formal open public record," said Knudson.

But the plan would go beyond that: It would also let legislators prevent current staff and even former staff sharing certain information with the public.

Republican state lawmakers also proposed to limit the public's access to information on a popular court database. The proposal will remove all records from the Wisconsin Circuit Court Access site, popularly known as CCAP, in cases where charges have been dismissed prior to trial, where the maximum penalty was a prison term of six years or less, the person charged was under age 25 and none of the charges were for a violent offense.

Further, the motion will require applying an open records balancing test to reports documenting officer-involved deaths. Wisconsin's open records law allows record custodians to determine whether the need to restrict access to a record outweighs the public's right to access. Current law doesn't specify that reports about officer-involved shootings released publicly are subject to the test. The finance committee's GOP members included language among their final budget revisions that will specify investigators who lead probes into officer-involved deaths must delete any information from their reports that would be barred from release under the test.

The motion also includes a proposal to allow employees to work seven days a week, and the removal of an alternative teacher licensing plan.

Under current state law, employers who own factories and retail stores must allow their workers at least 24 consecutive hours of rest in every seven consecutive days. The requirement doesn't apply to janitors, security guards, bakeries, restaurants, hotels and certain dairy and agricultural plants.

The budget motion also removes highly criticized teacher licensure changes from the budget. Republicans on the committee had approved those changes in a late-night session last month.

The plan would have allowed anyone with a bachelor's degree to be licensed to teach in core subjects of English, math, social studies or science. Anyone with experience in other non-core subjects could have been certified to teach under the previously adopted motion. That, too, was to be removed.

Teachers and others had spoken out against the licensing changes when they were first added.

Editor's note: This story has been updated to reflect the JFC's passage of the motion. It's also been updated with quotes from lawmakers on the JFC.