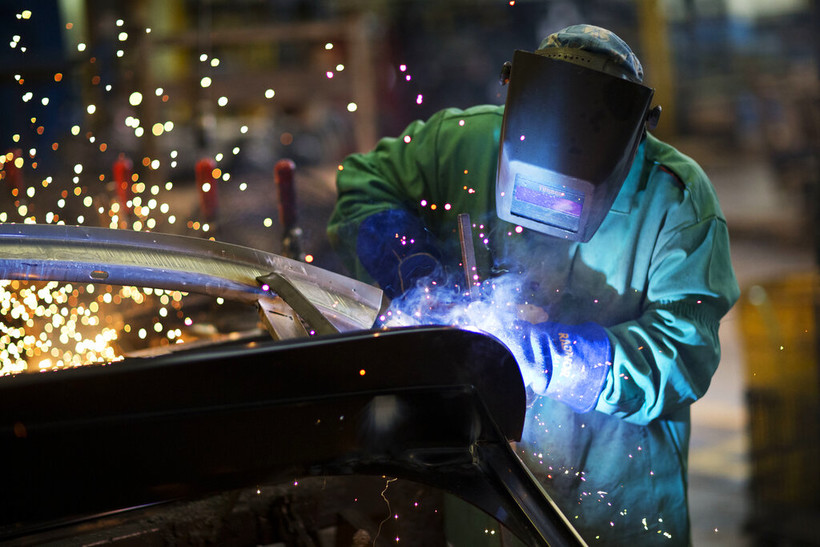 Sparks fly as a welder works on a frame for a school bus. AP Photo/David Goldman

Wisconsin manufacturers are cautiously optimistic about the future — despite hiring challenges, high inflation and energy costs.

That's according to a report released earlier this month by the Wisconsin Center for Manufacturing and Productivity, or WCMP.

"Manufacturers are generally an optimistic bunch," said Buckley Brinkman, the CEO of WCMP.

The report surveyed 400 manufacturers from across the state, and conducted five focus groups. It found that hiring was the most common struggle. Those surveyed also expressed concern about inflation and high energy costs.

"Our focus groups told us they see more opportunities even in a tougher business environment," Brinkman said. "They also welcomed a bit of a slowdown as production was at unsustainable levels earlier in the year."

The report found that 84 percent of participants said it was difficult to find qualified workers, and 56 percent had open positions that needed to be filled.

"More manufacturers now are seeing this as a chronic issue," Brinkman said. "They don't see it as cyclical, which I think is reflected in the demographic numbers. We just didn't have enough babies 18 years ago."

Larger employers reported struggling with workforce issues at a higher rate than smaller companies. The report said 81 percent of companies with fewer than 50 people had difficulty hiring, while 92 percent employing more than 50 people had staffing issues.

Ann Franz, executive director for the Northeast Wisconsin Manufacturing Alliance, said workforce is the number one issue among her members.

"Although supply chain constraints still are an issue, the overarching concern for manufacturers is workforce," she said.

To recruit and retain employees, the report said 69 percent of manufacturers are increasing wages and while 47 percent are offering more competitive benefits.

West said Fox Valley Metal Tech is trying to fill those openings by increasing pay and benefits. The company is also offering sign-on bonuses, work-from-home flexibility and opportunities for advancement.

"We're trying to help people with their development here with additional training ... and trying to promote the individuals (from) within so they can earn more money," he said.

To help relieve the pressure from workforce challenges, manufacturers — specifically larger firms — are investing more in technology and automation, according to the report.

Some technologies companies are investing in include cybersecurity, cloud computing, interconnected computing devices and automation robotics, according to a 2021 report from the Northeast Wisconsin Manufacturing Alliance.

"Companies are investing more and more in automation and technology than ever before," Franz said. "But no one's going to lose their jobs to robots. There's just not enough people."

"We're continuing to look at more things that reduce the amount of man-hours by using some automation or additional equipment that can do things you could normally do by hand," he said.

Although hiring is the biggest challenge facing manufacturers, inflation and high energy costs took an increased importance among companies, according to the report.

Almost half of the surveyed employers cited inflation as “an extremely important issue,” while the number concerned about energy costs almost doubled from 17 to 30 percent of respondents, the report said.

Brinkman said focus group participants felt that inflation and energy costs were downplayed in the survey results as they expect to see “shocks” to the economy this winter.

"We'll see how the war in Ukraine goes and how supplies are re-diverted, but that seems to be something that's going to raise its head," he said. "Inflation has just been a problem across the board."

Inflation and energy costs were especially concerning for smaller companies, according to the report.

"With increases in inflation and energy costs, of course, the smaller companies are going to have a greater impact on their bottom line, because they are a small company," Franz said.

Smaller manufacturers are at a disadvantage when it comes to responding to labor shortages, inflation and energy costs, Brinkman said.

According to Brinkman, roughly 70 percent of the state’s manufacturers have 20 employees or less. He said the disparity between large and small firms is "all about resources."

"If you're bigger, you have more resources. If you're smaller, you can be more agile, and more targeted," he said. "You used to be able to run a manufacturer at any size you wanted, as long as you were happy with the output. But now, size matters."