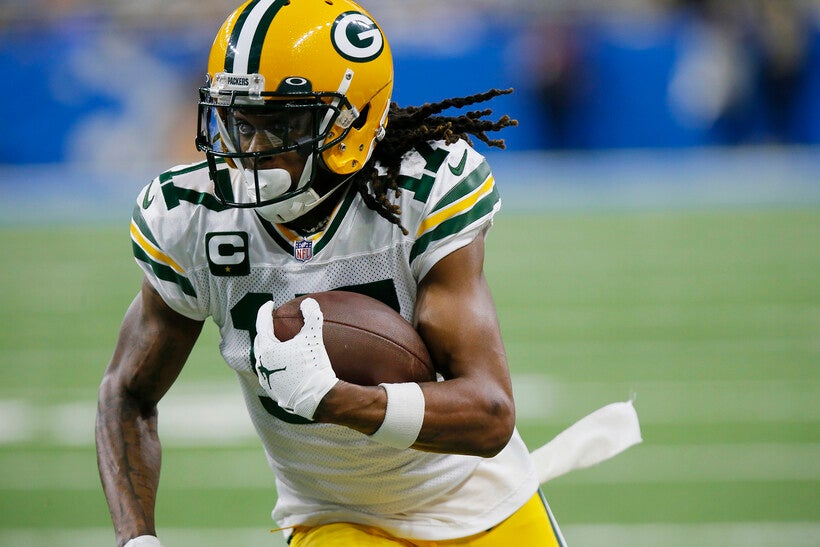 Green Bay Packers wide receiver Davante Adams runs during the first half of the team's NFL football game against the Detroit Lions on Jan. 9, 2022, in Detroit. The Las Vegas Raiders have traded two draft picks to Green Bay for All-Pro receiver Adams. A person familiar with the move said Thursday, March 17, the Raiders are sending the No. 22 overall pick in April's draft and another draft pick to the Packers to reunited Adams with his college quarterback Derek Carr. The person spoke on condition of anonymity because the deal hadn't been announced. Duane Burleson/AP Photo

NFL Network says Adams agreed to a 5-year, $141M deal with the Raiders, making him the highest paid wide receiver in history
By Jenny Peek
Share:

The Green Bay Packers are likely to have big shoes to fill in the wide receiver position after reports surfaced from the NFL Network and The Associated Press that Davante Adams is nearing a deal with the Las Vegas Raiders.

The Packers placed their franchise tag on the All-Pro wide receiver to keep him from becoming an unrestricted free agent, but Adams reportedly told the team he wouldn't play under the tag. The designation makes it so a player who would normally become a free agent is guaranteed at least one more year under contract.

The franchise tag on Adams was an attempt to cull salary cap woes after the team signed a contract with MVP Aaron Rodgers for $150 million over the next three years.

While no official details on the Adam's trade have been released, a person familiar with the move told AP the Raiders are sending their first round draft pick — No. 22 overall — and more to the Packers for Adams. The trade will reunite Adams with his college quarterback, Derek Carr.

The new, five-year deal with the Raiders totaling $141.25 million will make the 2021 No. 1 wide receiver the highest paid wide receiver in history.

The move will be a blow to Rodgers, who said that Adams is the best player he's ever played with.

"He's such a fantastic player," Rodgers said during a post game press conference on Dec. 25, 2021, after becoming Green Bay's career passing touchdowns' leader. "I've played with some great ones over the years ... but when you start stacking up the numbers for Davante it's mind-blowing, you know I really feel like he's the best player that I've played with."

Adams, who graduated from Fresno State, was drafted by Green Bay in the second round of the 2014 NFL Draft.

Editor's note: The Associated Press contributed reporting to this story.