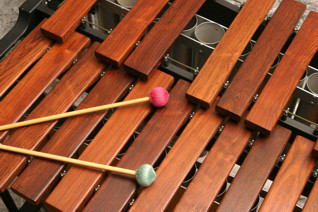 After their 1989 concert tour of Japan, marimba player Keiko Abe and recorder virtuoso Walter van Hauwe went to the Columbia studio in Tokyo to produce a CD of the repertory they had played.

When van Hauwe arrived for the last day of recording, he was obviously depressed. When Abe asked him what was wrong, he explained that his wife was very sick. She had already been in the hospital when van Hauwe had flown to Japan for the tour, but her illness had since become much worse.

Abe suggested that he return to Holland at once. She could explain the situation to Columbia, and, anyway, the final studio session was to consist of free improvisations. They could easily enough do the recording later.

She had convinced him. Van Hauwe put his recorder back in the case. But then he had second thoughts. “Keiko, let’s play now,” he said. “Just one or two times.”

As they played, Abe became aware that something special was happening. “The music angels came–and I simply followed the feeling,” she recalled. She didn’t think about the marimba, just followed the music as it passed from soft and tempered to strong and passionate, letting her imagination follow her feeling as she and van Hauwe improvised.

After they had played two pieces, van Hauwe packed up and flew to Amsterdam. A week later Abe got a phone call from him. He asked if they could put his wife’s name on one of the improvised pieces. He had been thinking of her as they played, and the piece had since become connected to her memory. Soon after his return home, she had died.

Columbia was just about to release the recordings with titles of their own, but Abe was able to get to the producers just in time to have them change the title of one of the pieces to “She died, my water lily Tonneke.”