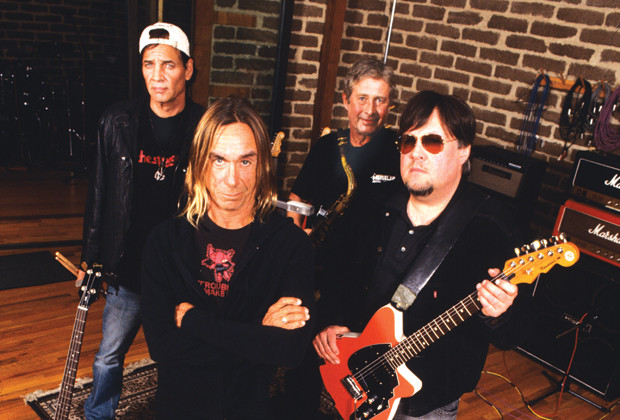 Authors and critics might be correct when they write off Detroit-area saxophone player Steve Mackay as simply a sideman to the Iggy Pop-led Stooges in the early 1970s, but doing so sadly undervalues the importance of his contributions. Hired hand or not, any musician would want to be involved in making a musical masterwork.

Mackay's initial tenure with the Stooges could only be counted in a matter of months, but his sax playing was an essential component for a band whose music would prove prophetic and influential for years to come.

Mackay died on Saturday after being diagnosed with sepsis, according to multiple media reports. He was 66 years old.

Although Mackay's participation in the Stooges' overall body of work was limited to those few weeks, his involvement would prove critical in the conception of the band's first bonafide masterpiece, 1970's "Fun House."

While the Stooges' music offered the definitive sonic template for the punk rock movement a generation later, the band's wide and varied influences and the deeper nuances of their sound were typically eclipsed amid its raw rawk power. Pop has frequently spoken in interviews about the impact that the free jazz of Ornette Coleman and John Coltrane and the precise funk of James Brown had on the "Fun House" material. The band's mission was to extrapolate the hard-hitting rhythms and complex arrangements from their heroes and suitably Stooge-ify these ideas to suit a garage-borne, five-piece band.

It was on the album's title track that Mackay's presence is the most pronounced and essential. "Fun House" is the best example to hear Pop's ambition fully realized: an aggressive, back-to-basics rock band whose music is as elastic and loose as it is precise and musically in your face. Mackay's role was to add a new dimension to this exhilarating 7-minute workout.

With the band's rhythm section impersonated a monomaniacal, beat-crushing James Brown horn section, Mackay was free to step forward as a fluid soloist, his sleazy-sounding saxophone wailing and sliding around the raucous melodies. His playing showed such range -- from a punchy honk to a guttural belch to an ecstatic squawk -- all in the service of keeping the musical churn moving. The tone of Mackay's tenor sax sits perfectly between the low, simple sounds pioneered by '50s R&B and blues musicians and the dexterity of the same era's jazz players.

"Blow Steve!" Pop commanded, as the frontman continually struggled against the wild current of the music so he could snag the spotlight and sing the verses.

Besides Pop's excitable howling, Mackay's bleating is the only countervailing sound to face off against guitarist Ron Asheton's unhinged, wah-wah soloing. The pairing highlights the feeling that this musical melee is a free-for-all that might just really tip over into something approaching religious ecstasy.

Despite the glorious studio results, Mackay's tenure with the band was ultimately short lived. He parted ways with the Stooges in the fall of 1970, only months after "Fun House" hit store shelves.

Without Mackay, the band remained in a state of flux as their sound evolved and various new members came and went. The Stooges only solidified again when Pop reconvened the band with guitarist James Williamson and most of the funk, blues and jazz overtones were jettisoned in favor of Williamson's aggressive guitarwork becoming the music's defining feature. The Stooges' sound had sharpened to a spastic, proto-metal like that heard on 1973's "Raw Power."

When Pop finally reunited the Stooges in 2003, Mackay came onboard as a touring musician. He also contributed to their two subsequent albums, 2007's "The Weirdness" and 2013's "Ready To Die."