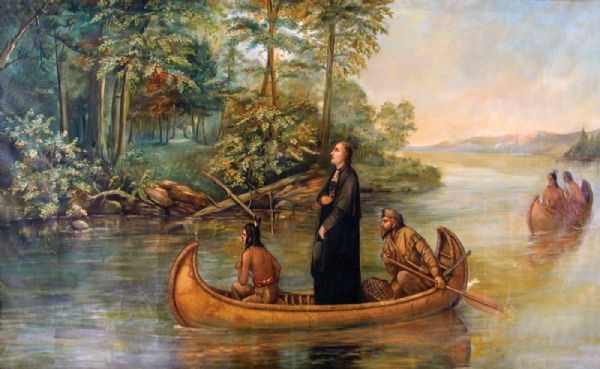 Remembering The Mississippi Voyage Of Marquette And Joliet

On May 17, 1673, the Rev. Jacques Marquette and Louis Joliet set out on a voyage that would take them thousands of miles into the North American interior, confirming that it was possible to travel by water from the Great Lakes to the Gulf of Mexico and initiating some of the first white settlements in the region.

Marquette and Joliet were an unusual match.

Father Jacques Marquette was a French-born Jesuit missionary sent to Canada, then known as New France, in 1666. Traveling abroad on behalf of his faith was just what Marquette wanted, writing "Would that I be ordered to set out for foreign lands. This has been the object of my thoughts since earliest childhood."

Marquette replaced Father Allouez at Chequamegon Bay in 1669 and built the St. Ignace mission at Mackinac, Michigan, in 1671. He showed a facility for languages, learning to speak fluently in six different Native American dialects. He also became very interested in a great river he’d heard about that the native people called "Missispi."

Louis Joliet likely met Father Marquette at the Jesuit mission at Sault Ste. Marie. Born near Quebec, Joliet had been destined for priesthood when he decided to change course and become a fur trader. He signed the declaration that gave France formal possession of a huge swathe of land around the Great Lakes in 1671. And when he heard about Marquette’s plan, Joliet turned it into a reality.

The two set out with a crew of five men in two canoes. They crossed the Straits of Michillimackinac and skirted Green Bay. The Menominee warned them not to go any further, claiming the waters were home to monsters who overturned canoes and ate men and a demon "who barred the way, and swallowed up all who ventured approach him." They also warned — quite reasonably — of the excessive heat.

Despite the warnings, Marquette and Joliet kept going, crossing the Wisconsin River and then following the Mississippi River hundreds of miles south to Arkansas. On July 16, near the mouth of the Arkansas River, they decided to turn around, confident that they had gone far enough to confirm that the Mississippi ran to the Gulf of Mexico. They also stayed far enough north to avoid capture by the Spanish who controlled Florida.

The men returned home the way they had come, arriving at the St. Francis Xavier Mission in modern De Pere in late September 1673.

Marquette and Joliet didn’t discover the Mississippi River, but their reports of the Indians they met and the natural resources they saw did lead French officials to construct a network of trading posts across the region to exploit its resources, primarily fur, and to introduce Christianity to native peoples.

The explorers also gave French names to cities all along the river and Marquette and Joliet's own names have been immortalized in towns (and universities) across the Midwest.